Showing posts from December, 2007
Show all

Is it possible that J.J. Abrams giant monster film, " Cloverfield ", may be exactly what the American public needs to see after experiencing the horrors of 9/11? Could watching a giant monster smash buildings in New York City be good therapy? Anyone who has seen the latest trailers for the film can't help but make comparisons to the type of destruction they witnessed on that infamous September morning. Yet, millions of Americans are waiting in eager anticipation for the film to be released next month. Does all this seem crazy? Well, it might if the exact same thing didn't happen fifty-three years ago. In 1954, Ishiro Honda unleashed the largest, and most destructive movie monster ever conceived of, Godzilla, into Japanese theaters. A mere nine years after the first two atomic bombs destroyed the Japanese cities of Hiroshima and Nagasaki, movie goers were treated to the same kind of fiery destruction, this time, being dealt out by a fictitious creature instead o
5 comments
Read more

Todd Tennant has sent us an exclusive from his Godzilla 1994 online graphic novel. On page 56, Godzilla gets very annoyed with a buzzing helicopter, and sends it crashing into the ocean! Go To The Godzilla 94 Site See Also: Japan Not Ready For UFOs, But Ready For A Godzilla Attack? / Godzilla Attacks! / Flashback - Godzilla X Mothra X MechaGodzilla : Tokyo S.O.S.- US Premiere / Godzilla Now Gaurds Toho's Main Gate /
Post a Comment
Read more

Toonami Set To Score With Eyeshield 21

VIZ Media, LLC (VIZ Media), one of the entertainment industry's most innovative and comprehensive publishing, animation and licensing companies, has announced the launch of the EYESHIELD 21 animated series on Toonami Jetstream, the popular online destination developed jointly by Cartoon Network and VIZ Media. The first episode debuts on December 17th and will be available at http://ToonamiJetstream.com . EYESHIELD 21 was adapted from the popular manga graphic novel series written by Riichiro Inagaki and illustrated by Yasuke Murata and published domestically by VIZ Media. The story is about teenager, Sena Kobayakawa, who has been picked on all of his life and decides to join the high school varsity football team as a team manager in hopes of reinventing himself. However, the cruel team captain Yoichi Hiruma discovers Sena's lightning-fast running ability and forces him to play as a running back with a secret identity as “Eyeshield 21.” From that point on, Sena’s life changes
Post a Comment
Read more

Source: Avery Guerra / Content From The Official Resilko Movie Website 2021, the not too distant future. A global devastation that was brought about by an alien invasion has left the wholeplanet in shambles. In the Philippines, a rag-tag group of survivors strives to survive in a secret sanctuary called “Paraiso”. Crisval Sarmiento, an ex-military colonel, is the reluctant leader that defends the whole compound from two threats. That of the Mutanos” or mutated humans serving the insect like alien race (aptly called “Balangs” by the humans) and the alien invaders themselves. Crisval, together with other human survivors soon discover the real reason that the “Balangs” have invaded the planet earth… the conversion of humans to serve their needs. In order to survive, they must go up against a technologically-advanced alien race using robots they have engineered from recycled parts of derelict everyday machines and military components. In the midst of this war for human survival, lo
Post a Comment
Read more

Ken is a mild-mannered man in his mid-twenties who has interests that stopped developing during adolescence. On a visit to a local toy collectors shop he acquires a rare alien action figure. Unexpectedly, Ken's world is turned upside down as the somewhat silly looking toy alters his life by giving him everything he has ever dreamed of and then callously taking it all back! Ken's immature desires and indecisive nature are pit against a collection of seemingly normal, yet equally misguidedcharacters who illustrate how many of us are victims of a socially implanted drive for things not in our own best interests. An Interview With Director Norman England RJ - The first thing I think everyone would want to know is how somebody goes from being a musician in New York to being a writer in Japan to working on Japanese films to creating and directing a Japanese Sci-Fi Film? It must have been an incredible journey. One any kaiju fan would give his (or her) right arm for. Tell us a lit
Post a Comment
Read more

By Ken Hulsey December 10, 2007
Godzilla X Mothra X MechaGodzilla : Tokyo S.O.S. - Premiere 6/25/04 USA My Father-In-Law and I arrived at the Egyptian a little early for the autograph session with Masaaki Tezuka , Yasuyuki Inoue , and Akinori Takagi at about 5:20. There where already several fans waiting around in the courtyard and a couple of vendors were setting up shop. I took my time and scanned the tables for more Godzilla merchandise to add to my collection. I wandered over to a table where a couple of gentlemen were unloading boxes of import Godzilla posters. I picked up a German Godzilla vs Gigan add and made a comment about it. One of the men took notice and asked "Do you know anything about these ?" I responded "Yes". He quickly took me aside and explained that he had just acquired this collection from an estate and that he needed my help in pricing the items. Since I was early I decided "What the heck." I spent the next ten minutes telling him what each item was and
Post a Comment
Read more 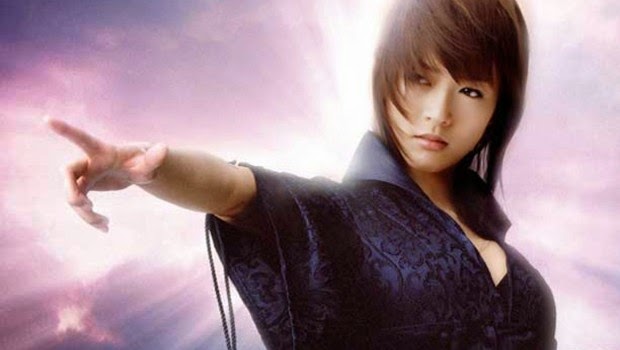 It starts in present-day Tokyo. A serial murderer is on the loose who is baffling the cops with his MO -- he tears an internal organ out of young women and then suspends his victims in dramatic poses in big open spaces. (Is Kitamura referencing "Silence of the Lambs" here? I think so.) A hot-blooded detective, Kanzaki (Shosuke Tanihara), becomes determined to crack the case -- so much so that he loses track of time and sleeps at his desk, the wall behind him covered with grisly photos of the victims. Then a colleague wakes him up and reminds him that today is his wedding. Kanzaki tears off to the church, arriving just in time to save his bride, the trusting, tender-hearted Mina (Yumiko Shaku), from an emotional meltdown. Enough to say that, instead of glorying in this day of days, Mina ends up dead -- the killer's fourth victim. Cut to the dark, smoky, antechamber of the Other World, where an imperious young woman in black leather awaits Mina's soul. Called
Post a Comment
Read more