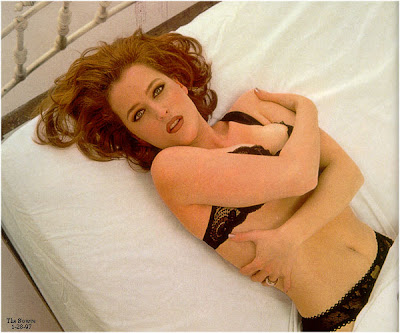 GILLIAN ANDERSON (Dana Scully) was born in Chicago, Illinois. When she was two, her parents moved their family to London, England, where Anderson spent the next nine years of her childhood. Eventually they moved back to the United States and settled in Grand Rapids, Michigan.

Anderson began acting in community theatre productions while in high school and then proceeded to study acting in college where she obtained her BFA degree from the prestigious Goodman Theater School at Chicago's DePaul University. Upon acquiring her degree at age 22, she headed off to New York to pursue an acting career.

She performed in the Manhattan Theatre Club production of Alan Ayckborne's Absent Friends, for which she won a Theatre World Award in 1991. In addition she also appeared in Christopher Hampton's The Philanthropist, at the Long Wharf Theater in New Haven, CT. It wasn't long before she finally decided to relocate to Los Angeles to pursue a career in film and television.

In September 1993, Anderson auditioned for a Fox pilot called The X-Files, for the role of Dana Scully - a part that would jump-start her career, earning her much approval and worldwide recognition. Over the next nine years, Anderson's work on the series won her two Screen Actors Guild Awards, one Emmy, one Golden Globe for Best Actress in a Drama Series, and numerous nominations. In 1998, she carried her role of Dana Scully over into the motion picture adaptation based on show: The X Files: Fight The Future. In 1999, she made "The X-Files" history by becoming the first woman to write and direct an episode of the series entitled "All Things."

Anderson's other feature film credits include the Miramax features, The Mighty, starring Kieran Culkin, as well as 1998's Playing By Heart, alongside Ellen Burstyn, Sean Connery, Angelina Jolie, and Madeline Stowe among others.

House of Mirth, directed by Terrence Davies, was released in December 2000. The film was listed among the Top 10 films of the year 2000 by critics from Rolling Stone, Entertainment Weekly, Newsday, New York Daily News, The Village Voice, and the New York Press. For her portrayal of Lily Bart, she won the British Independent Film Award for Best Actress, and the Best Performance Award from the Village Voice Film Critic's Poll.

Anderson was able to pick up an Audience Award at the IFTA Awards for her role starring alongside Robert Carlyle in the popular film The Mighty Celt, directed and written by Pearse Elliot. She also had a cameo role in the comedy, Tristram Shandy: A Cock and Bull Story, which gained rave reviews in North America and overseas.

Charles Dickens' classic was brought back to life on the BBC miniseries Bleak House, where Anderson starred as the cold Lady Dedlock. A critically acclaimed performance by Anderson earned her a nomination for Best Actress at the British Academy of Film and Television Awards in 2006.

She recently finished work on How to Lose Friends & Alienate People opposite Jeff Bridges and Megan Fox, Boogie Woogie for director Duncan Ward, and she was the voice of Queen Vorkana in the animated comedy short Robbie the Reindeer in Close Encounters of the Herd Kind. She will be well remembered for her role as Sarah Merrit in the critically acclaimed The Last King of Scotland, directed by Kevin MacDonald and starring Forest Whitaker. She also appeared in Straightheads for writer/director Dan Reed.
By Ken Hulsey at July 22, 2008

Email ThisBlogThis!Share to TwitterShare to FacebookShare to Pinterest
Labels: Actress, Gillian Anderson, Movie, Television, The X-Files, The X-Files I Want To Believe, USA