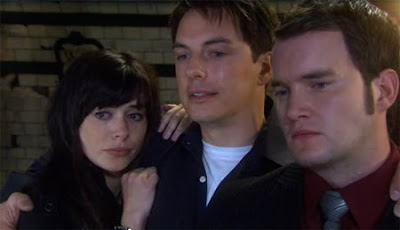 Filming for the third series of the smash hit drama Torchwood, created by Doctor Who writer Russell T Davies, has begun in Cardiff.

Due to transmit in 2009 on BBC One, the series, called Torchwood: Children Of Earth, sees the team embarking on a single action-packed adventure as they battle for the future of the human race against the fiercest force they have encountered.

Other regular cast involved in their high-octane adventure are Kai Owen as Rhys Williams, Gwen's husband, and Tom Price as PC Andy.

Special guests in the five part series are Peter Capaldi (Doctor Who, The Thick Of It, Skins), who plays the role of Mr Frobisher – a civil servant who is hiding a terrible secret; Paul Copely (Coronation Street, The Bill) as Clem – the survivor still haunted by his past; and Liz May Brice (Bad Girls, The Bill) as Johnson – the cynical covert government agent determined to expose Torchwood.

Russell T Davies said: "The new series of Torchwood is hugely bold and promises to be bigger and better than ever, the audience is in for an amazing ride.

"This series is one big serial and the most ambitious story we've ever made, and we've got plenty of surprises in store."

Julie Gardner, Head of Drama, BBC Wales, said: "We hope to make Torchwood a gripping and surprising TV event with storylines that push our team into greater danger and sacrifice.

"Joining our main cast are some fantastic guest artists who will only add to making this unmissable TV."

The first two series of Torchwood have received global critical acclaim and the hit drama has been sold to more than 20 countries.

The second series of the BBC Wales-produced series, broadcast on BBC Two earlier this year, attracted audiences of around 3.4 million, peaking at 4.2 million for the first episode. Including viewers on BBC Three and BBC iPlayer the consolidated audience was 5.1 million.

When it launched on BBC Three in October 2006, it attracted the channel's highest viewing figures, with an audience of 2.5 million for the first episode.

Torchwood is executive produced by Russell T Davies and Julie Gardner. The producer is Peter Bennett (Doctor Who).

Torchwood is a BBC Wales for BBC Drama Production and was commissioned by Jane Tranter, BBC Controller of Fiction.

"One of the best programmes on TV." The Observer

"This show has been brilliant." The Sun

"Torchwood lightens up but doesn't dumb down as series two kicks off in style." London Evening Standard

See Also: Torchwood Is Set To Experience The Big Bang / Torchwood Star Eve Myles Is A Knockout For BBC Radio / Torchwood - Are You Missing The Best Series On TV?
By Ken Hulsey at August 26, 2008