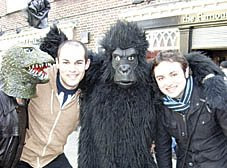 London commuters got quite a surprise yesterday, when both King Kong and Godzilla invaded two subway stations during rush hour. The reason for the two internationally famous monsters to take their battle into the Underground was a publicity stunt to promote the stage play, "Men of Monsters."

Indeed the two monsters (both men in suites) caused quite a stir. At first, subway security didn't know how to handle the situation, until they learned the whole thing was all in fun, then they joined in the frivolity.

Station supervisor Jan Dukes said: “I was trying to control the crowds and here was this gorilla cavorting about with his friend Godzilla. When we heard it was all part of a play all the staff wanted to have their picture taken with them. It was great fun.”

"Men of Monsters" is the creation of director James Blakey and playwright Matt Borgatti. Their play centers around two events, the Cuban Missile Crisis, and the filming of King Kong vs Godzilla in Hollywood. The action goes back and forth from the tense "real-life" drama of a world on the brink of destruction, to a movie set where 'over-the-top' cliche actors in rubber suites are making a B monster movie.

I don't want to be the one to tell them that "King Kong vs Godzilla" was filmed in Japan, not in Hollywood...

Anyway, the play is supposed to be a comedy that points out the dichotomy of how life would be going on as 'normal', while the two super-powers were about to snuff out life on Earth.

It is unknown if King Kong and Godzilla will be traveling by subway again any time soon.

See Also: King Kong vs Godzilla (1962)(Toho) / G-FEST XVI To Host Kenji Sahara / Photo Of The Week - Godzilla Goes On A Date / New Wooden Godzilla Figures Cost More Than Most Cars / Rare Video - Haruo Nakajima Puts On The Godzilla Suite One Last Time For Magazine Shoot / Toho Is Renting Out Godzilla And MechaGodzilla Movie Costumes / Yumiko Shaku Looks For love At The Blood Bank / Godzilla To Add His Fire To Hot Atlanta / Godzilla Vs The Netherlands / You Can Do Anything But Lay Off Of My Kaiju Shoes / Haruo "Godzilla" Nakajima Turns 80 /King Kong, Godzilla And The Creature From The Black Lagoon At The Rose Parade / The Top Ten Hottest Monsters Of 2008 / Godzilla Rodan Ultraman And Mothra Invade The Miami Beach Art Scene / James Morrow Satirizes Hollywood, Secret Goverment Projects And Godzilla In Shambling Towards Hiroshima / Godzilla 3D Poster / Will Silent Night Be Replaced By Godzilla Christmas? / Rare Sci Fi, Fantasy, and Horror Items Go Up For Auction / Godzilla Godzooky Plush / Todd Tennant To Return To Godzilla 94 / Breaking News! Godzilla Spotted In Chiba.....Wait....Its A Tree! / A New Godzilla Board Game Is In The Early Development Stage / Mom! I Want A 1/100 Scale Radio Controled MechaGodzilla For Christmas! / G-FAN #85
By Ken Hulsey - March 27, 2009