A Public Memorial To Bob Wilkins In Sacramento 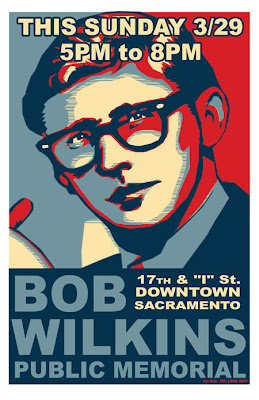 This coming Sunday there will be a public memorial to the late Bob Wilkins in Sacramento.

According to Mr. Lobo (of the TV series Cinema Insomnia and a dear friend of Wilkins) the three-hour event will feature some rare 16mm films of the Bay Area television icon that reportedly will "blow fans away." The event will also feature several clips from Bob Wilkin's late night program, "Creature Features", along with a display of memorabilia that includes the infamous Captain Comics Costume.

Fans will also be able to sit, and have photos taken, in one of Bob's signature rocking chairs.

Mr. Lobo, Ernie Fosselius, Scott Moon, the Wilkins Family, close friends and fans will all get a special chance to share their memories of Bob Wilkins in a special 'open-mic' presentation. This is certain to be a very emotional moment that will honor a man who brought so much joy to so many people.

There will be refreshments, water and soda on hand, plus a special "Watch Horror Films" documentary will be on sale at the event.

See Also: Is There Something Bold And Creative Brewing In Sacramento? / Support Your Local Horror Host....Or In This Case Mr Lobo / Bob Wilkins 1932-2009 The Passing Of A Bay Area Icon / Merry Christmas From Monster Island / Mr Lobo Composes A New Halloween Song / Silicon Presents The Lobotronix Film Show / Mr Lobo And Conrad Brooks Cast In Plan 9 From Outer Space Remake / Mr. Lobo & The Queen Of Trash Get The VIP Treatment At The B Movie Celebration / Sara Dunn Photo Shoot And Casting News / B Movie Celebration Scores World Premiere Of Cleavagefield / The Hometown Of The B Movie Celebration Needs Our Help! / Cinema Insomnia: In Search Of Ancient Astronauts /Mr Lobo To Receive Lifetime Achievement Award At The B Movie Celebration / Famous People Talk About Star Wars / Two More Big Reasons To Go To The Fangoria Weekend Of Horrors / Donate Trash So That The Queen Of Trash Can Make Her Music Video Debut / Interview: Sara Dunn (Queen of Trash)
By Ken Hulsey at March 25, 2009