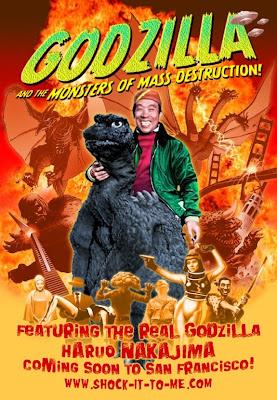 Godzilla is indestructible. Planes can't stop him. Bombs explode off his hide with no effect. But scheduling conflicts can knock him out!

San Francisco's "Godzilla and the Monsters of Mass Destruction" film festival featuring the original Godzilla, Haruo Nakajima, has been postponed.

According to event organizer August Ragone:

JUNE 27, 2009: Due to unforeseeable scheduling conflicts, the GODZILLA & THE MASTERS OF MASS DESTRUCTION event slated for the Castro Theatre in San Francisco on August 21-23, has been postponed until further notice. When the event can be rescheduled, we will break the announcement here, and on our official website: shock-it-to-me.com. So, stay tuned!

We thank you for your interest and consideration and hope to see you in 2010!