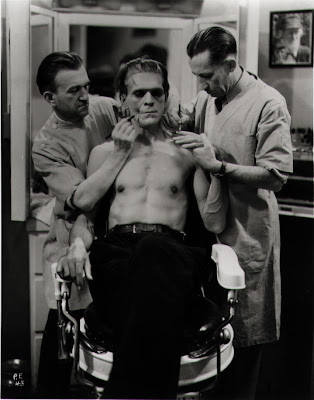 As it is, "Creature From The Black Lagoon" is on "pause" and the remake of "The Wolfman" didn't wow the fans, yet Universal and film maker Guillermo Del Toro are set to give another classic monster a go, this time "Frankenstein".

Indeed Del Toro is gearing up for the film as we speak, and is set to do some makeup tests on actor Doug Jones.

The film maker tells MTV, "We have been designing the creature, sculpting it. Bernie Wrightson designed the creature. That's the man, the go-to guy for 'Frankenstein.' My idea is to try to shoot that movie exactly as--" he paused, "Almost like an illustration [in] black & white. It would be done very differently than the other 'Frankenstein' movies. But it's in the future; we're doing tests in a couple weeks."

Does that mean that the film will be in black and white, like the original and Mel Brooks homage, "Young Frankenstein"?

Not exactly, Del Toro explains, "I would hope that it would resemble it."

"Resemble it?" Okay, I have no idea what the director means by that.

Anyway the film maker made a big splash at Comic Con, when he announced that he was getting a 'do over' in the form of a new "Haunted Mansion" movie.

That's another new Hollywood trend that really irks me, after a film gets botched, the studio waits a few years and tries it again, like those two "Hulk" movies made a few years apart.

Del Toro also took time at the convention to squash the rumors that he was going to remake "Van Helsing" which reportedly was just an Internet rumor with no basis in fact.

See Also: Monster DVD Madness! DEMEKING, GAMERA And HOUSE OF THE WOLF MAN / Frankenstein, Dracula, The Mummy And Zombies - Let's Get Ready To Rumble! / Halcyon International Pictures Teams Up With Famous Monsters Of Filmland To Reboot Classic Universal Horrors / Famous Monsters To Bring Back The Creature, The Mummy, Frankenstein And Others To The Silver Screen? / Movie Review: "The Wolfman" (2010) / The Wolfman (2010)(Universal) / Universal's Monsters: Legacy / More Monsterpalooza Photos / Eric Swelstad Promises A More Violent Monster In "Frankenstein Rising" / The Top Ten Hottest Monsters Of 2009
By Ken Hulsey at July 28, 2010