Tim Burton On For MONSTERPOCALYPSE - Still In Line For GODZILLA? - More Film Details! 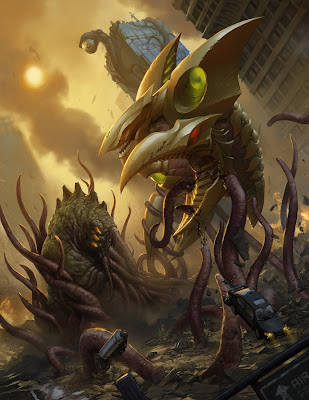 UPDATE: The quotes contained in this article that referencedTim Burton and the upcoming "Godzilla" movie project from Legendary Pictures have been removed from the SlashFilm interview.

I think that speaks for itself.

(Thanks to Mark Torchia for the heads up on that!)

Last May it was announced that Disney / Dreamworks had signed on John August to write a big screen adaptation of the giant monster game, "Monsterpocalypse" from Privateer Press. Along with that news came a lot of speculation that Tim Burton would soon follow as a director for the film, due in large part his long history of collaborating with the writer, mostly on Disney backed projects.

Well today it has been confirmed by producer Roy Lee, via an interview with the Slashfilm website, that indeed Burton is developing "Monsterpocalypse" along with August and Matt Wilson of Privateer Press who is serving as a co-producer. According to the interview, the later two are presently banging out a script as we speak.

Lee would go on to do more than just confirm Burton's involvement with the film, he would also reveal many of the plot points in "Monsterpocalypse" as well.

According to Lee, "The general take on the film that I can give you is that the giant monsters come to earth and start wreaking havoc. The humans, at this point, fight back. And they feel like they’ve destroyed them, but they quickly learn that the monsters that come had actually not died and just sort of burrowed underground and are sending some sort of signal into space. Apparently, it is probably going to be a distress signal. So the humans know that something is going to be coming, they just don’t know what yet. And they know how big these monsters can be. Then it cuts to many years later when nothing has come back, but the humans have prepared for possible monsters coming back. And by this time, they have developed these giant robots that will fight the monsters when they come. That is what is going to take place. But most of the movie is going to be during that battle between the giant robots and the giant monsters."

Lee also lets it slip that Burton was in line to direct the upcoming "Godzilla" movie for Legendary Pictures, which he is also serving as a producer for.

Check out this excerpt from the interview:

Peter (SlashFilm): Wow. I had heard rumors that Tim Burton was considering directing “Godzilla” for Legendary, which you are also producing.

Peter: Did he choose this over that, or…?

Roy: I can’t really talk about that, just because Warner Brothers is not going to be very happy with me.

I think that we can all read between the lines there, either Burton is still on board for "Godzilla", which would make a lot of fans very happy, or he opted to pass on the money from Legendary Pictures for Disney dollars.

The producer also mentioned that though "Voltron" is part of the "Monsterpocalypse" board game, Burton and company opted to leave the iconic giant robot out of the film, "The company that owns Voltron approached us, Matt Wilson, to be able to utilize the robots for the world of "Monsterpocalypse". But we are not using anything from there in the movie, because a lot of the robots and monsters will be created by Tim himself and the cast."

In fact Burton will be developing the giant monsters and robots for the film alongside four time Academy Award winning effects man Ken Ralston who has worked on such films as the "Back to the Future" series, "Who Framed Roger Rabbit" and the "Star Wars" trilogy.

Other items of interest from the interview include the fact that the film will be shot in 3D, of course, and that it is presently slated for a late 2012 release.

Read the entire interview at - http://www.slashfilm.com/2010/07/19/exclusive-tim-burton-developing-monsterpocalypse-full-details-revealed/

I don't know about you, but this sounds just awesome to me! The plot sounds great and the involvement of Burton pretty much seals the deal!

I just can't wait to see how Burton tackles a giant monster film!