Showing posts from February, 2012
Show all

The Monstrous Movie Photo Of The Day: Meet Baby Milo Who Has Washington Terrified 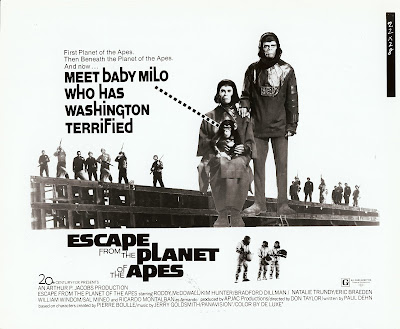 Written By: Ken Hulsey Well moviephiles it's Oscar night! What does that mean here at Monster Island News? Well since "Annie Hall" beat out "Star Wars" in 1977 I haven't held the award in any form of high regard so I'm posting about a film that wasn't nominated for one, namely "Escape From The Planet Of The Apes". I know, your confused. Why the hell would I post about a "Planet Of The Apes" movie on Oscar night? Well I think that the film really had all the qualities that The Academy generally looks for like drama, action, great acting, monkeys ... talking monkeys, a tear jerker ending and that sexy Ricardo Montalban. What's not to like? Not buying it? Hey just think about how hard it would be to try and act with all that John Chambers ape makeup on? Roddy McDowall and Kim Hunter should have rolled out of the place with statues and expensive gift baskets ... but alas ... they didn't. Hey I know Chambers won an Oscar f
Post a Comment
Read more

The Monstrous Movie Photo Of The Day: Getting To The Bottom Of The Bug Problem At Hobbs End 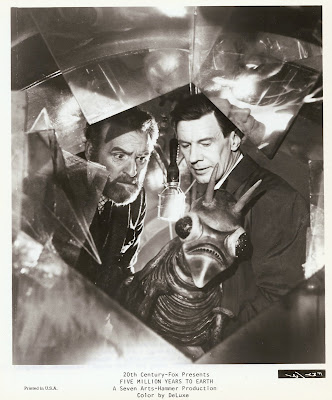 Written By: Ken Hulsey Today I have opted to change things up a bit with an article that, for once, doesn't focus on a movie advertisement but instead features an actual publicity still. For those of you who are out of the loop on this sort of thing publicity stills are movie images that are sent out to magazines, newspapers and now in the digital age websites for promotional purposes (i.e articles and movie reviews). Today's image comes from one of my personal favorite films "Five Million Years to Earth" ( Quatermass and the Pit - UK). In the photo are the films two top billed stars, Andrew Kier (Professor Quatermass ) and James Donald (Dr. Mathew Roney ) alongside one of the insect "Martians" who's spaceship was unearthed during the construction of a London subway tunnel. Here is the photo info from the reverse side of the photograph: "Professor Quatermass (Andrew Keir) and Roney (James Donald) finally get into the secret compartment of t
Post a Comment
Read more

REAR WINDOW - Do You Know? 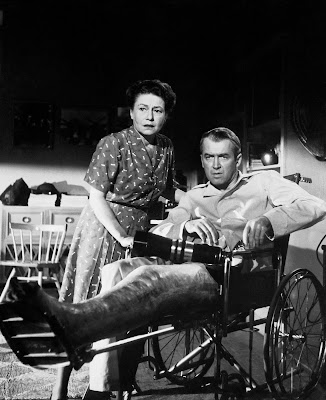 Trivia Compiled By: Ken Hulsey Sources: IMDB / Wikipedia Rear Window is a 1954 American suspense film directed by Alfred Hitchcock, written by John Michael Hayes and based on Cornell Woolrich's 1942 short story "It Had to Be Murder". Originally released by Paramount Pictures, the film stars James Stewart, Grace Kelly, Wendell Corey, and Thelma Ritter. All of the sound in the film is diegetic, meaning that all the music, speech and other sounds all come from within the world of the film with the exception of non-diegetic orchestral music heard in the first three shots of the film. The entire picture was shot on one set, which required months of planning and construction. The apartment-courtyard set measured 98 feet wide, 185 feet long and 40 feet high, and consisted of 31 apartments, eight of which were completely furnished. The courtyard was set 20 to 30 feet below stage level, and some of the buildings were the equivalent of five or six stories high. The film was sho
Post a Comment
Read more

The Monstrous Movie Clip Of The Day: "Quit Steaming Up My Tail!"

Written By: Ken Hulsey One thing that I try to do here at Monster Island News is showcase all forms of ultra-cool entertainment, be that movies, TV shows or music. One genre that has been lacking as of late has been animation, namely cartoons. Being a child of the 70s I was raised on what I consider to be the "Golden Age" of cartoon animation, which in my mind is anything produced between 1930 and 1980. Granted one could argue that a second such golden age took place in the early 1990s with all the great television shows and films produced by Disney that were produced in that all too brief window. I can't argue against that point, there were some really great toons from that time. That being said, I generally turn on modern cartoon programs and throw up in my mouth a little. So it's the classics for me and the king of such classics has always been the one-and-only Bugs Bunny, who to me has always been equated to the king of all comedy. Nothing brings a smile to
Post a Comment
Read more 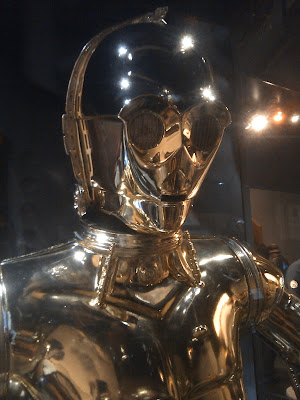 Photos And Story By: Ken Hulsey On Saturday I had the pleasure of attending the "Star Wars: Where Science Meets Imagination" exhibit at the Discovery Science Center in Santa Ana, Ca. For those of you unfamiliar with this traveling exhibit that has been moving from city to city across America for the better part of a decade it is a rather amazing collection of props, models and costumes from all six "Star Wars" films. As expected I ran around the exhibit taking all kinds of photographs and spent an absurd amount of time starring glossy-eyed at the collection of items I have seen on screen over a godzillion times. I was amazed by both the amount of work and detail that went into some items and the sheer simplicity of others. I will get more into some of that in a follow-up article. Today I have opted not to get into discussing the numerous number of vehicle and spaceship models, which were my favorite part of the exhibit, but to instead focus on the character
Post a Comment
Read more 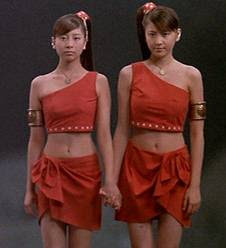 by Armand Vaquer Masami Nagasawa has been a rising star in Japan. Godzilla fans know her as one of the Mothra fairies (shobijin) in Godzilla x Mothra x Mechagodzilla: Tokyo S.O.S. (2003) and Godzilla Final Wars (2004). Left, Masami Nagasawa (right) with Chihiro Ôtsuka in "Godzilla x Mothra x Mechagodzilla: Tokyo S.O.S." Now, she is set to star as a television detective. From Japan Today : TOKYO — Masami Nagasawa says she is very happy to play a detective in her newest TV drama, “Toshi Densetsu no Onna,” which will air on TV Asahi on Friday nights from April. It has been three years since Nagasawa appeared in a TV drama series. “Toshi Densetsu no Onna” is a mixture of comedy and mystery. Nagasawa plays Tsukiko Otonashi, a police detective who is obsessed with urban legends and who works on unsolved cases behind the legends. Right, Masami Nagasawa in “Toshi Densetsu no Onna.” To read the Japan Today article, go here .
1 comment
Read more

The announcement has been made that the 10th Annual Rondo Hatton Classic Horror Awards ballot will be unveiled and voting begins this coming Sunday night. What is the Rondo Awards? The Rondo awards, named after Rondo Hatton, an obscure B-movie villain of the 1940s, celebrate the best in classic horror research, creativity and film preservation. To see the ballot and to vote, go here Sunday night!
Post a Comment
Read more

On This Date: "Adventures of Superman" Premieres In L.A. 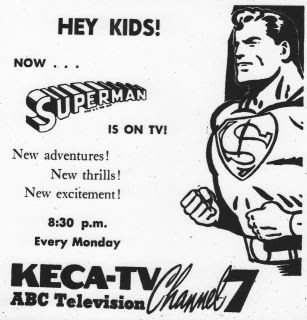 by Armand Vaquer It was a hair under a year before my time, but on this date in 1953, the Adventures of Superman starring George Reeves, Phyllis Coates, Jack Larson, John Hamilton and Robert Shayne premiered in Los Angeles on KCEA-TV Channel 7 (the forerunner of KABC-TV). The premiere episode was "Superman On Earth," which chronicled Jor-El and Lara's sending the baby Kal-El to Earth before the planet Krypton exploded. The episodes that followed were the ones that Robert Maxwell and Bernard Luber produced. These were rock 'em, sock 'em crime dramas and not kiddie shows.
Post a Comment
Read more

The Monstrous Movie Photo Of The Day: It Begins With The Incredible ... And That's Only The Beginning! 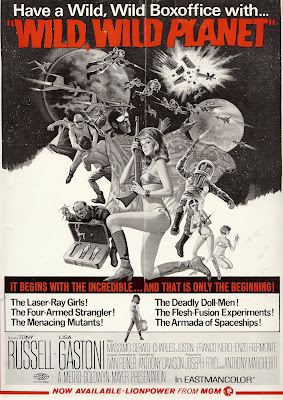 Written By: Ken Hulsey Okay movie poster buffs today I have real treat for you! Everyone enjoys a really cheesy flick from time-to-time and MGM's (Metro-Goldwyn-Mayer) "Wild, Wild Planet" is considered by connoisseurs of such cinema gems as the cream of the crop. "Spaghetti Westerns" were all the rage in the late 1960's as were a handful of Italian made sci fi films such as WWP. Mix together some bad dubbing with low end special effects and several bizarre (sometimes head scratching bizarre) gimmicks and you have the recipe for cult cinema gold! Listen to this list straight from the poster! The Laser-Ray Girls! The Four-Armed Strangler! The Menacing Mutants! The Deadly Doll-Men! The Flesh-Fusion Experiments! The Armada Of Spaceships! That's a lot of hyphens! You gotta like "Laser-Ray Girls" and "Mutants" .... and ... and lot's of model spaceships zipping around on strings right? Once again this image is from my personal col
Post a Comment
Read more 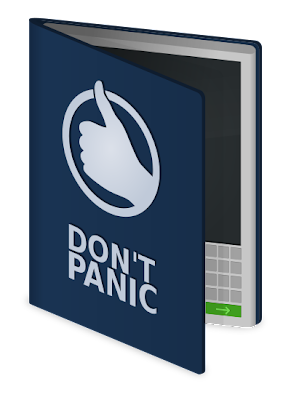 - "What to do if you find yourself stuck with no hope of rescue: Consider yourself lucky that life has been good to you so far. Alternatively, if life hasn't been good to you so far, which given your present circumstances seems more likely, consider yourself lucky that it won't be troubling you much longer." - The Hitchhikers Guide To The Galaxy (Book)(Stephen Fry) - The Hitchhiker's Guide to the Galaxy (2005)
Post a Comment
Read more 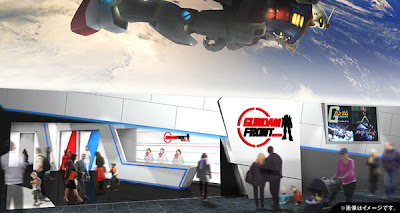 by Armand Vaquer There's a new theme park opening in Tokyo. It's called Gundam Front Tokyo . According to the Japan Times : A theme park featuring popular "anime" series "Mobile Suit Gundam" will open on April 19 in Tokyo's Odaiba district. According to Bandai Co., the new theme park, named Gundam Front Tokyo, will have a huge dome-shaped screen showing images of Gundam, the venerated fighting robot in the popular series, and rare documents related to the series' production will be on display. The most "Gundam" I've ever done was to pose in a Gundam uniform on the Gundam Lift at the old Bandai Museum (below). To read the full article, go here .
Post a Comment
Read more
More posts