ATTACK OF THE KILLER MUTANT CHICKENS! - Bizarre Animation From Bangladesh 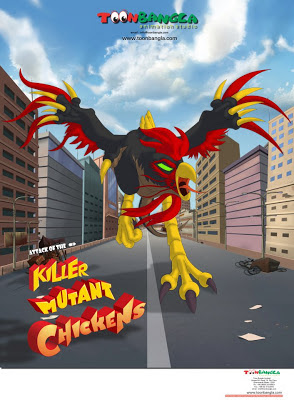 In Bangladesh it's not zombies that you need to be scared of ... it's um ... chickens. Indeed the fowl are pissed off and it is up to a team of ex chefs armed with assault weapons to take em out before they take over the world.

'Attack of the Killer Mutant Chickens' is an animated short from Bangladesh that combines all the action of a martial arts film, a zombie film, a love story (?) and a Bollywood musical in a cornucopia of strangeness that has to be seen to be believed.


In the near future, Bangladesh is terrorized by killer mutant chickens. A team of kung - fu fighting chefs must battle in order to keep chicken on their menu. But one chicken sets its sights on revenge. It's time for the ultimate poultry showdown.

Masud Khan, Dhaka city’s number one mutant chicken chef, doesn’t know why things got to be this way. All he knows is that no matter how bad things get, he’s got mouths to feed. That people still want chicken on the menu. And that he and his team of heavily armed chicken hunters are the only people crazy enough to put chicken on the table.

But one chicken sets its sights on Masud for blood-soaked mutant revenge. It fathers killer mutant children and trains them for battle against their human enemy. All hell breaks loose as Masud and his team engage in mortal combat for their lives, for humanity and for tasty chicken biryani. It’s time for the ultimate poultry showdown.


Somehow I just wish that Colonel Sanders would have shown up at the end to kick some ass!

Oddly enough this sort of thing isn't too out of the norm for cinema from Bangladesh. Back in 2010 I watched a remake of 'King Kong' from there that was honestly the weirdest bit of film I've ever seen.

With zombie flicks running rampant in the western world and mutant chickens in the east I expect the two genres to clash some day in a 'Zombies vs Chickens' film, which will probably be produced in China.

Don't laugh, anything is possible in the world of independent horror cinema!

Check out 'Attack of the Killer Mutant Chickens' :


Murgi Keno Mutant (Attack of the Killer Mutant Chickens), brought to you by Bellissimo Ice Cream from Bellissimobd on Vimeo.
By Ken Hulsey - May 25, 2013