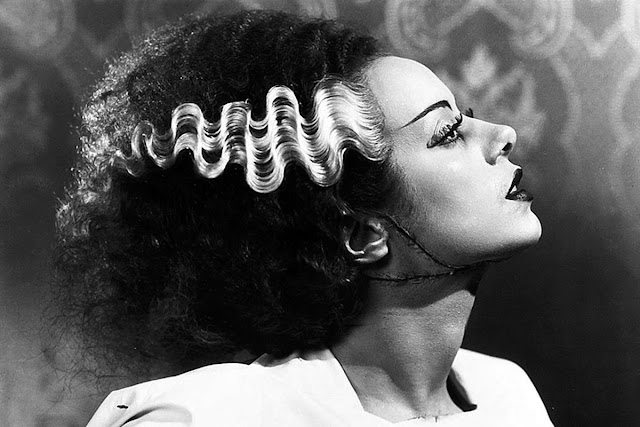 Tonight we continue our Monstrous May of Frankenstein films with the most honored bride in monster matrimony-in the film that had the great Boris Karloff make a second appearance in his best-known role, to pick up the narrative where the original "Frankenstein" film had left off! Tonight on MeTV, you will witness the ONLY appearance of the one Universal monster who didn't kill anybody- and, regardless of her limited screen time, has become a true icon of Universal horror- the “Bride of Frankenstein”!

This 1935 film- which is constantly requested by our viewers- starts on a dismal, stormy night- with the original story’s authoress- Mary Shelley-revealing that the Frankenstein tale did not end at the story's conclusion! She begins to continue the saga, from where the original “Frankenstein” film left off- with the burning windmill, the scene of where the final battle between monster and maker took place, collapsing. Poor Henry, thrown from its heights by the Monster, is being carried home by the crowd that witnessed it all, as they mourn his demise but celebrate the "end" of the Monster. The father of little Maria, the child the uncomprehending Monster threw into the lake, unaware that she would drown, remains at the smoking ruins, wanting to make sure the Monster is finally gone- but his luck- and his life- run out- because the Monster still lives!

Meanwhile, Henry is carried back to his young fiancee Elizabeth- but, against all odds, he (just like the Monster he created) has survived! Henry is on the slow road to recovery when he gets a late night visit from Dr. Pretorius- a mentor of Henry’s ,who knows what his recovering student has achieved, and seeks his help. The sinister Pretorius has conducted his own experiments in creating life- and displays some of the bizarre results to Henry- in an effort to partner with his knowledge and expertise- and finally create a true perfect living being! With all he's experienced, Henry wants no part of such an undertaking- the awful results of his own experiment have convinced him that playing God is a mistake.

His Monster, meanwhile, has fled from the windmill, burned and hunted like a wild animal. He seeks solace in the forest, eventually finding the hut of a blind hermit (the basis for a famous- and hilarious- scene in “Young Frankenstein”). The hermit is grateful to have this new "friend"- as is the Monster, who is taught some basics by the kindly blind man. This tranquil alliance is disrupted when two hunters (one of whom is John Carradine), having lost their way, come to the cabin for help with directions-and are shocked to see the Monster! The misunderstood creature escapes and, trying to hide from his pursuers, enters a crypt in a graveyard- where, coincidentally, the devious Pretorius just happens to be in search of "parts” for his latest project, while enjoying a snack! Completely unfazed by the appearance of the Monster, Pretorius realizes that he can use the lonely creature as leverage to get Henry to cooperate with him- by threatening his bride's safety! Unwilling to let anything happen to Elizabeth, Frankenstein submits to the demands, heads uneasily back to work with Pretorius to create the Monster's fondest desire- a bride! But- will this fiancee of fright be a match made in...well...a laboratory, but- perhaps not the happy union some might wish for?

This classic 1935 film is not just one of the best horror films, but also included in lists of top motion pictures-period- of all time. Karloff continues to add new facets to the character of the Monster- including the addition of speech- and Dr. Pretorius, portrayed by the "flamboyant" Ernest Thesiger, is, without a doubt, a truly memorable addition to the Frankenstein film legend, as is the Bride, portrayed ever so briefly, but effectively, by Elsa Lanchester.You'll note that I may not be pronouncing her name correctly in one segment- we had various opinions on how it should be pronounced, and I may have chosen wrong in that case, and there was no time for a reshoot!). We’ll tell you all about the entire cast, certain deletions from the production, and more- as well as providing our usual contributions. Plus- watch for a quick cameo from one of our favorite MeTV actors!

“Bride of Frankenstein"'s reception begins on MeTV tonight at 8pm eastern/pacific, 7 central, or check for time and channel in your area in your local listings or at www.metv.com . Tweet along with the scores of fans who live-Tweet during the show on Twitter, always using the hashtag #svengoolie – which lands us among the top trending topics in the entire country- and sometimes beyond! Our Chicago area viewers get a look at the movie that preceded this one – “Frankenstein”-at 11 am on WCIU, the U.