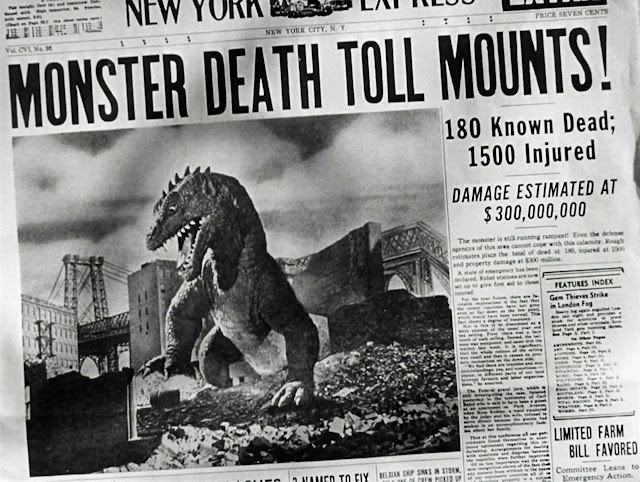 The Beast from 20,000 Fathoms is a 1953 science fiction film directed by Eugène Lourié and stars Paul Christian, Paula Raymond and Cecil Kellaway with visual effects by Ray Harryhausen. The film is about an atomic bomb test in the Arctic Circle that unfreezes a hibernating fictional dinosaur, a Rhedosaurus, that begins to wreak havoc in New York City. It was one of the first monster movies that helped inspire the following generation of creature features, coining it with the atomic age.

Far north of the Arctic Circle, a nuclear bomb test, dubbed Operation Experiment, is conducted. The explosion awakens a dinosaur known as the Rhedosaurus, thawing it out of the ice where it had been hibernating for 100 million years.

The Beast starts making its way down the east coast of North America, sinking a fishing ketch off the Grand Banks, destroying another near Marquette, Canada, wrecking a lighthouse in Maine, and crushing buildings in Massachusetts. The Beast eventually comes ashore in Manhattan, and after tearing through power-lines attacks the city. The Beast's rampage causes the death of 180 people, injures 1,500 and does $300 million worth of damage.

Arriving on the scene, the military troops of Col. Jack Evans, blast a bazooka hole in the Beast's throat and drive it back into the sea. Unfortunately, it bleeds all over the streets, unleashing a prehistoric germ, which begins to contaminate the populace, causing even more fatalities. The germ precludes blowing the Beast up or burning it, lest the contagion spread. Thus it is decided to shoot a radioactive isotope into the Beast's neck wound with hopes of burning the Rhedosaurus up from the inside, killing it.

When the Beast comes ashore and attacks the Coney Island amusement park, military sharpshooter Corporal Stone takes the potent radioactive isotope launcher, and climbs onboard a rollercoaster. Riding the coaster to the top of the tracks so he can get to eye-level with the Rhedosaurus, he fires the isotope into the Beast's wound. The Beast lets out a horrible scream and crashes to the ground dead, with the surrounding park ablaze.

The Beast from 20,000 Fathoms had a production budget of $200,000. It earned $2.25 million at the North American box office during its first year of release and ended up grossing more than $5 million. Original prints of Beast were sepia toned.

While visiting his friend Ray Harryhausen on the set, Ray Bradbury was given a copy of the script (which was going under the working title "Monster From the Sea") and was asked if he could possibly do some rewriting on it. After reading the script, he remarked about a scene in the story (which featured the monster destroying a lighthouse) that seemed very similar to a short story that he had published in "The Saturday Evening Post" several years earlier called "The Beast from 20,000 Fathoms". Bradbury's story was about a dinosaur that destroys a lighthouse. The next day he received a telegram offering to buy the film rights to the story. After the sale, the film's title was changed to "The Beast from 20,000 Fathoms". When Bradbury's story was reprinted years later, he changed its title to "The Fog Horn".

An original music score was composed by Michel Michelet, but when Warner Bros. purchased the film they had a new score written by David Buttolph. Ray Harryhausen had been hoping that his film music hero Max Steiner, under contract at the time with Warner Bros., would write the film score. Steiner had written the landmark score for RKO's King Kong in 1933. Unfortunately for Harryhausen, Steiner had too many commitments to allow him to do so but, as it turned out, Buttolph composed one of his most memorable and powerful scores, setting much of the tone for giant monster film music of the 1950s.

Some early pre-production conceptual sketches of the Beast showed that at one point it was to have a shelled head and at another point was to have a beak. Creature effects were assigned to Ray Harryhausen, who had been working for years with Willis O'Brien, the man who created King Kong. The monster of the film looks nothing like the Brontosaurus-type creature of the short story. The film creature is instead a kind of Tyrannosaurus rex-type prehistoric predator, though quadrupedal in stature. It was unlike any real carnivorous dinosaur and more closely resembled a rauisuchian. A drawing of the creature was published along with the story in The Saturday Evening Post. At one point, there were plans to have the Beast snort flames, but this idea was dropped before production began due to budget restrictions. The concept, however, was still used for the film poster artwork. Later, the Beast's nuclear flame breath would be the inspiration for the original Japanese film Gojira (1954, Godzilla).

In a scene attempting to identify the Rhedosaurus, Professor Tom Nesbitt rifles through dinosaur drawings by Charles R. Knight, a man whom Harryhausen claimed as an inspiration.

The dinosaur skeleton in the museum sequence is artificial; it was obtained from storage at RKO Pictures where it had been constructed for their classic comedy Bringing Up Baby (1938).

The climactic roller coaster live action scenes were filmed on location at the Pike in Long Beach, California and featured the Cyclone Racer entrance ramp, ticket booth, loading platform and views of the structure from the beach. Split-matte, in-camera special effects by Harryhausen effectively combined the live action of the actors and the roller coaster background footage from the Pike's parking lot with the stop-motion animation of the Beast destroying a shooting miniature of the coaster. 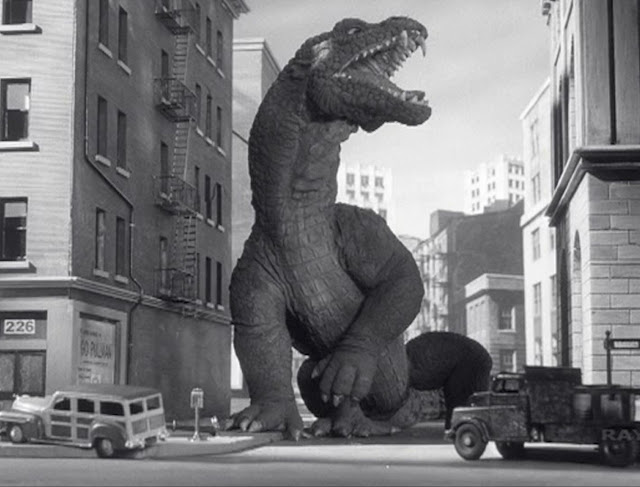 When the radio announcer is reading the news about the monster's rampage through New York, various shots of the city are shown, mostly with panicked citizens in the street. When the announcer mentions the situation at Times Square, the accompanying footage shows the Palace Theater, whose marquee reads "Judy Garland - Live and in Person." 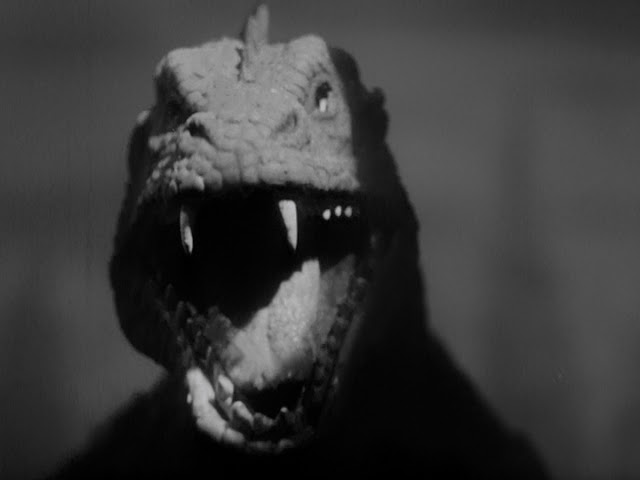 When Prof. Elson is talking to Lee from the submerged diving bell, he describes the dinosaur as a survivor of the Paleolithic era. He should have said Cretaceous, Paleolithic refers to a human occupation period and means "Stone Age", and there certainly weren't any dinosaurs around then. 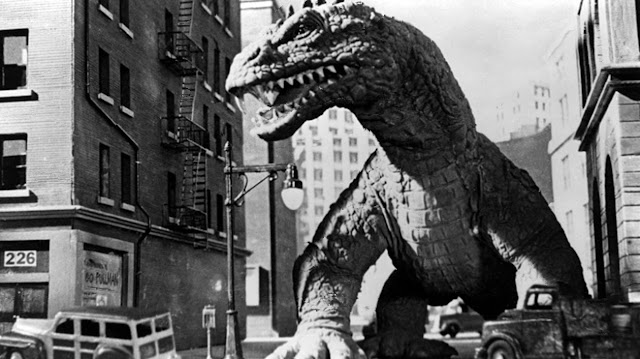 New York is like a city besieged. A state of emergency has been declared... and the entire police force put on 24-hour duty. Civilian defense is fully mobilized... and shelters have been opened in an effort to stop the mounting hysteria. All traffic has been halted. And Times Square, the heart of New York, has stopped beating. The National Guard has been called out, fully armed. to repel the invader. This is full-scale war against a terrible enemy... such as modern man has never before faced. Ordinary bullets have no effect... and a method of destroying the awesome creature... has not yet been formulated. But the battle field has been cleared. Herald Square. 34th Street. Broadway. Every section of the city is guarded. No one knows where the monster will strike next. It was last seen on Wall Street, close to where it came ashore. But lower Manhattan has become no man's land... where the beast, at present, lies hidden. The National Guard is barricading the entire area... in an effort to confine the death and destruction... of what is already the worst disaster in New York's history.

The Beast from 20,000 Fathoms was the first live-action film to feature a giant monster awakened/brought about by an atomic bomb detonation, preceding Godzilla by 16 months. During the production of Godzilla, its pre-published storyline was very similar to that of The Beast From 20,000 Fathoms and was actually titled The Giant Monster from 20,000 Miles Under the Sea (海底二万哩から来た大怪獣 Kaiteinimanmairu kara Kita Daikaijū). The film's financial success helped spawn the genre of giant monster films of the 1950s. Producers Jack Dietz and Hal E. Chester got the idea to combine the growing paranoia about nuclear weapons with the concept of a giant monster after a successful theatrical re-release of King Kong. In turn, this craze included Them! the following year about a colony of giant ants (the first of the "big bug" films), the Godzilla series from Japan that has spawned films from 1954 to the present day, and two British features helmed by Beast director Eugène Lourié, Behemoth, the Sea Monster (U.K. 1959, U.S. release retitled The Giant Behemoth) and Gorgo (U.K. 1961). 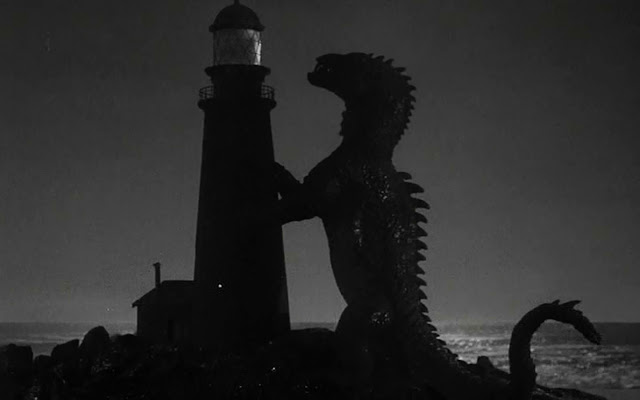 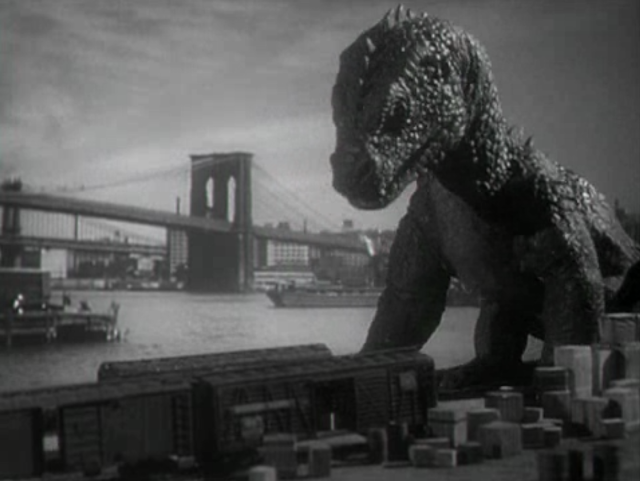 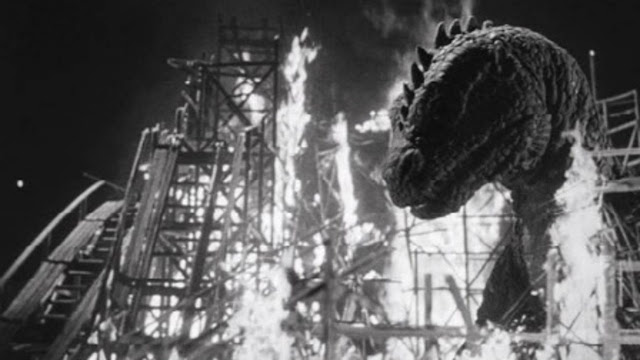 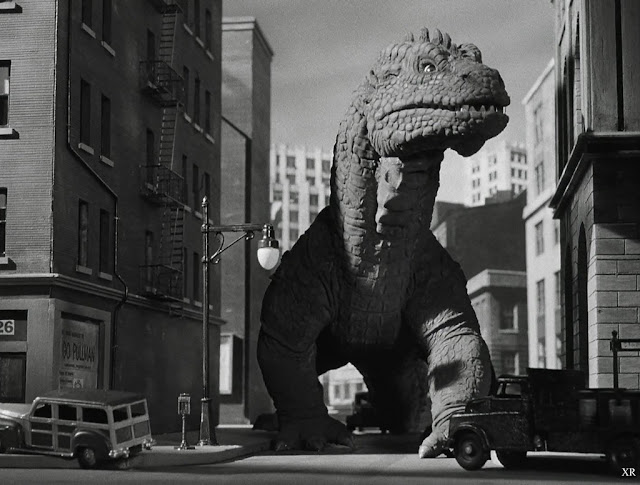 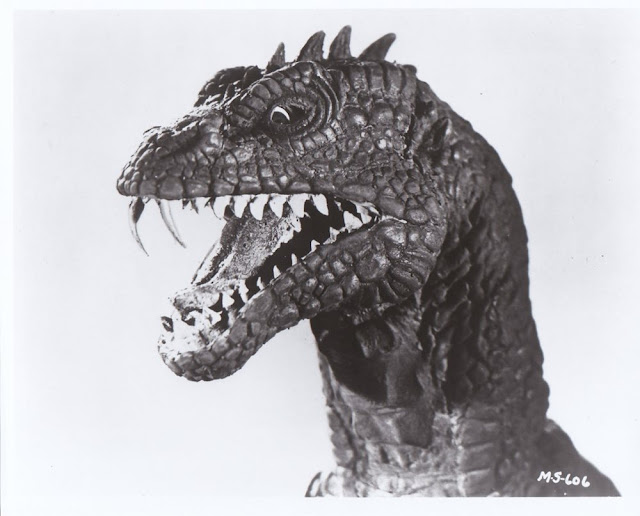 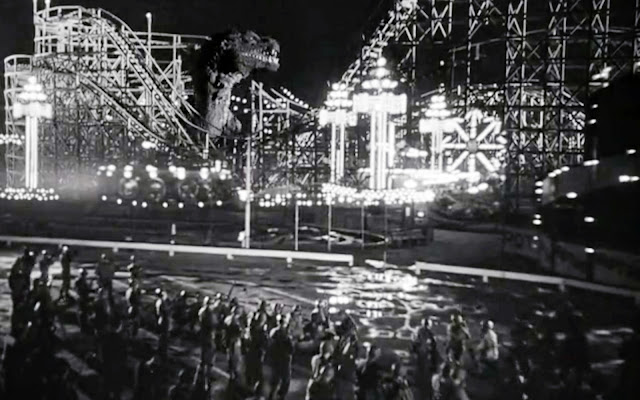 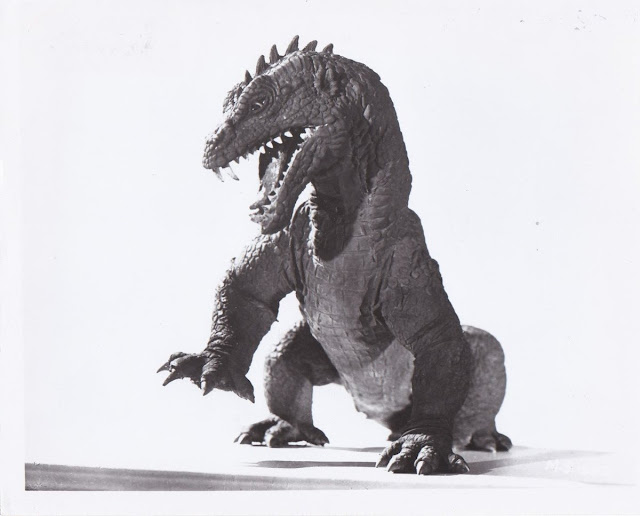 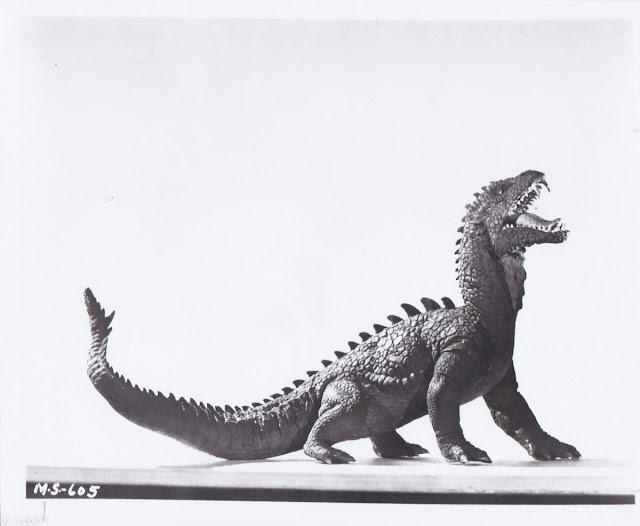 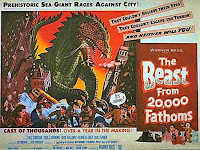 The Beast from 20,000 Fathoms is a 1953 science fiction film directed by Eugène Lourié and stars Paul Christian, Paula Raymond and Cecil Kellaway with visual effects by Ray Harryhausen. The film is about an atomic bomb test in the Arctic Circle that unfreezes a hibernating fictional dinosaur, a Rhedosaurus, that ... 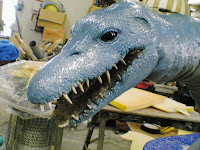 Johnny has been working with McDunn at the old lighthouse for the past three months. The lighthouse is situated on a rock 2 miles out to sea, and Johnny is looking forward to “shore leave” the following day. That night, McDunn tells him about a huge sea creature that comes to the lighthouse every year to cry out at the fog horn [mistaking it for the cry of its own kind]… 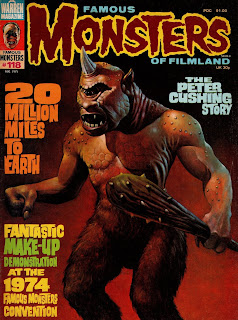 What makes this issue cool:

The End Of The Ymir
Part two of the magazine's complete novelization of the classic sci-fi monster movie "20 Million Miles To Earth" complete with many never before seen photos.

Monster Make-Up Master
A profile on Hollywood make-up artist Verne Langdon who worked on many of the horror and sci-fi genre's best films including Planet of the Apes.... 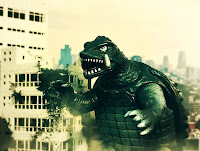 Director Noriaki Yuasa initially began production on a film titled Dai gunju Nezura (lit. The Great Rat Swarm) which would involve real rats crawling over miniatures of cities. The rats received for the film had fleas, which halted production on Dai gunju Nezura. The success of Toho's Godzilla films led to the rival company Daiei to create a monster series of its own...