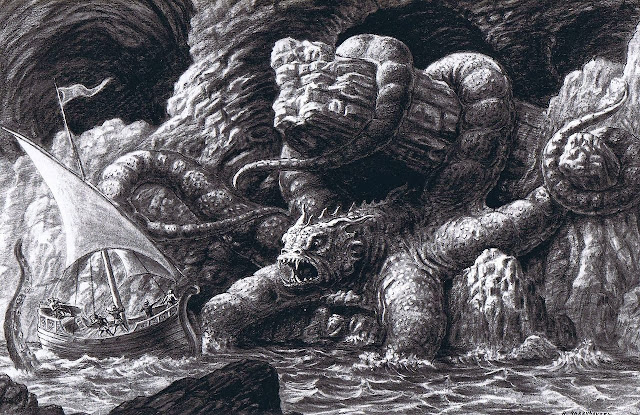 Here is an update on the proposed film "Force of the Trojans" that we first reported on last October.

From The Guardian (UK)

He was the acclaimed film-maker who pioneered animation effects for masterpieces such as Jason and the Argonauts and Clash of the Titans of 1963 and 1981 respectively. Ray Harryhausen created extraordinary characters, including sword-wielding skeletons and a Medusa with writhing asps as hair, for 16 films – yet a new book about his “lost” screen projects reveals that he also worked on nearly 80 more films.

Hundreds of sketches and models that reflect his visionary ideas are being published for the first time. They include the great white whale for John Huston’s 1956 Moby Dick, though he never got to work on the production, and Big Ben’s tower snapping in two as a tidal wave engulfs London in a remake of The Deluge that he never got off the ground.

There is so much unseen material for a project called the Force of the Trojans – from sketches, including a talking sphinx, to a screenplay – that there are plans to make a film based on its epic story of love and betrayal.

John Walsh is one of the trustees of the Ray and Diana Harryhausen Foundation – the largest animation archive of its kind outside of the Walt Disney Studio, with an estimated 50,000 items. He has waded through it in researching his book, Harryhausen: The Lost Movies, to be published by Titan Books in September.

He told the Observer that he was taken aback by the scale of unrealised artwork that reveals new worlds, epic tales and fearsome creatures.

Walsh describes Harryhausen, who died in 2013 aged 92, as the most influential stop-motion animator and special-effects wizard in cinema history. Such is the Oscar-winning film-maker’s enduring influence that, at his death in 2013, George Lucas said that “there would likely have been no Star Wars without Ray Harryhausen”.

Having been a long-standing admirer, even before meeting him as a film student 30 years ago, Walsh thought he knew the entire oeuvre of a film-maker whose classics include It Came from Beneath the Sea, the 1955 science fiction film, and One Million Years B.C., the 1966 prehistoric adventure, as well as the beloved Sinbad films, notably The 7th Voyage of Sinbad, 1958, his first colour feature.

When Harryhausen made The Beast from 20,000 Fathoms, the 1953 science-fiction film based on a story by his friend Ray Bradbury, he caught the attention of producer Charles Schneer, with whom he went on to collaborate on most of his films.

Walsh said: “We have now formed a relationship with Charles Schneer’s company. They own Force of the Trojans. We are now in co-production to get the film made.

There were problems with the script, which is why the film was never green-lit, and Walsh, who is a film-maker in his own right, has redrafted it. In his book, he writes: “Force of the Trojans opens with the siege of Troy, and the attack with the giant wooden horse.

Advertisement
“The story arc follows Trojan Prince Aeneas and his battle for revenge following the death of his wife during the battle of Troy… Beverley Cross also included a journey to the underworld, which had previously been considered for Jason and the Argonauts.

“For this new film, there were to be numerous animated creature sequences to bring even more spectacle than Clash of the Titans. These included… the tentacled sea creature Charybdis and, on land, a vicious, jaw-snapping creation called Scylla.”

Walsh said Harryhausen would not have wanted people to know about projects he could not pursue.

The material reflects that Harryhausen was ahead of his time. Having worked on One Million Years B.C. for Hammer Films, he had suggested to studio head Michael Carreras in the 1960s that they could remake the 1930s film, The Deluge, which was about a huge tidal wave that strikes America. He wanted to set it in the UK, and created concept art.

Walsh said: “Ray said to Carreras that this kind of genre, the disaster genre, is due for a comeback. Carreras said no, don’t think so. Of course, [soon after], there was The Poseidon Adventure, The Towering Inferno… Ray had predicted it correctly.”

He added: “In looking through Ray’s unrealised projects, I’ve found my heart racing.

“The blueprints are here for a dozen films, and Hollywood is franchise-poor at the moment. It might be time to revisit Harryhausen. Everything old is new again.”

The foundation established by legendary special effects visionary Ray Harryhausen is pleased to announce a joint effort with Morningside Productions, the company of late film producer Charles Schneer. Discovery of new materials in the vast archives of the Ray and Diana Harryhausen Foundation will be the basis... 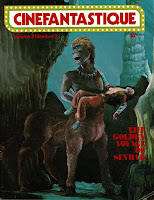 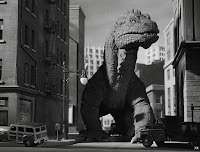 When the Beast comes ashore and attacks the Coney Island amusement park, military sharpshooter Corporal Stone takes the potent radioactive isotope launcher, and climbs onboard a rollercoaster. Riding the coaster to the top of the tracks so he can get to eye-level with the Rhedosaurus, he fires the isotope... 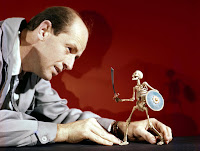 Ray Harryhausen, who brought sword-fighting skeletons to the 1963 movie Jason and the Argonauts and was known as the master of stop-motion animation for his work on that and other films such as Clash of the Titans and The Golden Voyage of Sinbad, has died.