Over Half A Million UFO Enthusiasts Plan To Storm Area 51 ... A Place Guarded By Guys With Guns 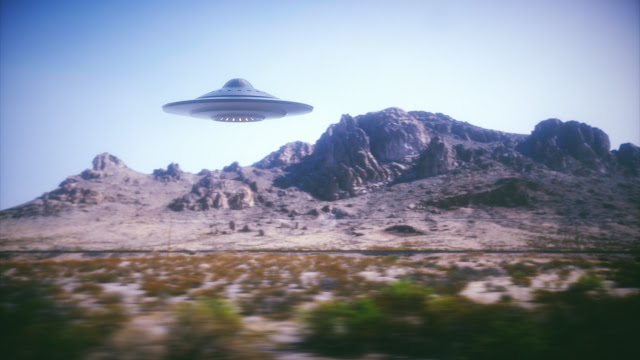 ... and possibly other nasty stuff (reverse engineered from UFO technology in all likelihood) and ... this is the important part ... have orders to shoot you.

The Air Force has issued a stern warning to the over half of million people planning to storm a top-secret US military base in the Nevada desert who are on a hunt to “see them aliens."

Over 600,000 people have signed up to an event called “Storm Area 51, they can’t stop all of us” which invites attendees to gather en masse before going into the air force base, which has long obsessed alien conspiracy theorists.

The satirical event, which is organised on Facebook and is scheduled to take place on 20 September, appears to be a joke given the high security and heavily guarded nature of the base.

The organisers said: “We can move faster than their bullets. Let’s see them aliens."

But Air Force spokesperson Laura McAndrews has released a warning to potential trespassers. 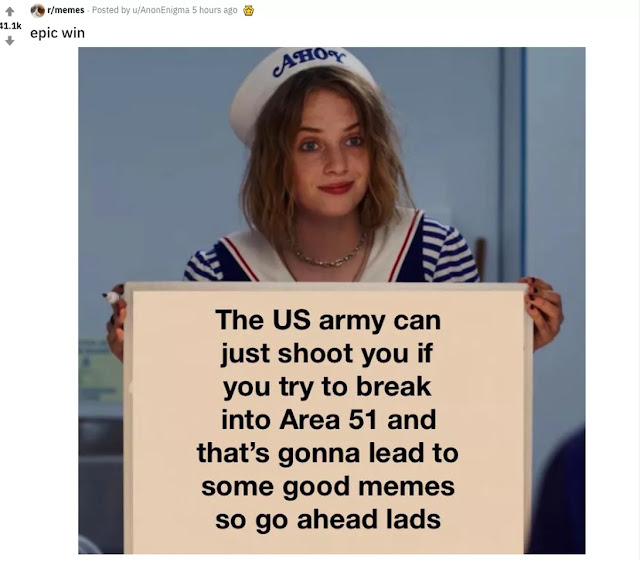 “[Area 51] is an open training range for the US Air Force, and we would discourage anyone from trying to come into the area where we train American armed forces,” she said.

Ms McAndrews added: “The US Air Force always stands ready to protect America and its assets”.

But she failed to elaborate on specific details around how officials would react to potential intruders.

“We will all meet up at the Area 51 Alien Center tourist attraction and coordinate our entry,” the event description reads. “If we naruto run, we can move faster than their bullets. Lets see them aliens.”

The "Naruto run" is a reference to a Japanese manga-inspired running style featuring arms outstretched backwards and heads forward. It is inspired by the running style of Naruto Ozumaki – title character in the Japanese anime series Naruto.

Conspiracy theorists have long believed the US government holds secret information about aliens and UFOs at Area 51 and believe it is used to stow captured UFOs or alien remains and technology. But the US government categorically denies the existence of such objects.

While it featured in the 1996 alien invasion film Independence Day as an alien testing laboratory, the base’s actual main function continues to be unknown.

The base, which has been the focus of conspiracy theories for decades, was only formally recognised as a military base in 2013 after a 2005 Freedom of Information Act request.

The perimeter of the base is constantly patrolled by armed security guards and CCTV and motion-sensor cameras are also in use – with signs around the base warning intruders could face “deadly force”.

Conspiracy theorists allege the area has been the site of frequent UFO sightings.

Now honestly this whole thing was engineered as bit of satire, but if the power of social media has taught us anything I would bet dollars to donuts that on September 20th there will be a gathering outside Area 51 and undoubtedly someone who has had to many Michelobs will lead a band of equally inebriated space cadets over the wire. Hopefully the authorities will be able to round them up peacefully. - Ken

When it came to explaining away UFO reports there were two things that government sponsored programs like Project Sign, Project Grudge, and Project Blue Book could use to convince the public that the whole mess (UFO sightings) was nothing more than simple misidentification of known celestial objects...

Details are, of course sketchy at best, but from what we know for sure is that the Israeli Air Force scrambled several fighter jets after a "unidentified" object was reported in the sky in the area of the Dimona Nuclear Power Plant. After the fighters came into... 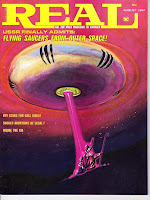 Was The UK Attacked By A Giant Tentacled Space Monster?

John Harrison, a local resident, describes what he saw that night, “It was huge. At first I thought it must have been a hole where the moon was shining through but then I saw the tentacles – it looked just like an octopus It was an incredible site; I have never seen anything like it before. I have no idea what it was, all I can say is what I saw”.
By Ken Hulsey - July 14, 2019