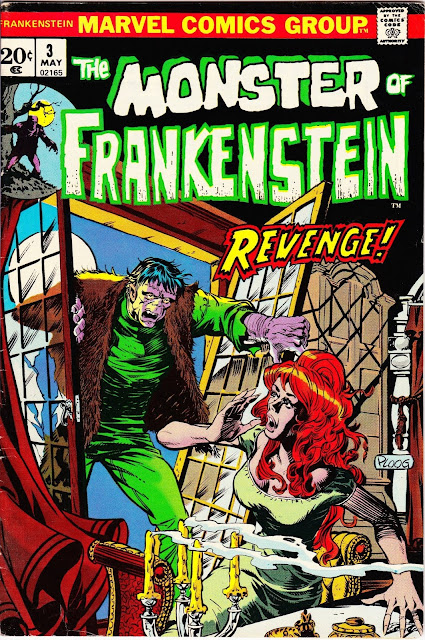 Script by Gary Friedrich, art and cover by Mike Ploog

1898
The ship sunk, the monster attacks the lifeboat, sparing only Walton, Canute, and Sean so they can row to a safe shore together. Taking refuge in the wreckage of another ship, the monster bids Walton to finish his story. The origin of Frankenstein continued:

At his trial, Frankenstein begs to be hanged even though he's innocent because he's so afraid of the monster. After months in prison, his father brings him news that evidence has been found clearing him for Clerval's murder and that he could be released. Victor's relief is tempered when the monster pays him a visit to warn him that his need for revenge is still unsatisfied and he will be present at his wedding. Nonetheless, Victor decides to marry Elizabteh, but he decides to head across the sea to a remote village for the occasion as a precaution. Victor spends his time there watching the dock, not realizing that the monster could swim across the sea and surface a mile upshore. Victor returns to find his bride murdered and snaps.

With his own father passing away shortly after, Victor spends an indefinite time in an asylum, until his own desire for revenge gives him enough drive to go back out into the world solely to hunt his monster. It nearly ends when their showdown on an icy arctic shore leaves Victor stranded on an iceberg, but the doctor is rescued by the ship of the original Captain Walton. The monster pursues him but manages to board the ship only a day after Victor passes away from exposure. The monster decides that his life no longer holds any meaning, but still runs to escape murder at the hands of the ship's crew so that he could find a way to take his own life on his own terms.

As the story session ends, the ghost ship the party is resting in suddenly collapses on top of them.

"The Fury of a Fiend!":
The Frankenstein Monster joins a group of gypsy entertainers and is tricked into helping one of them return Dracula to life. The Executioner!, pencils by Dunling, inks by Grogar; Francis Tourneau is an executioner to King Louis XVI of France in the year 1769; He labors to find a more efficient means of executing prisoners; A physician named Joseph-Ignace Guillotin provides him designs for a mechanized decapitation device.

"A Cold and Lasting Tomb!":
The Frankenstein Monster is frozen in ice and re-awakens in the present. Witch Hunt, script by Stan Lee, art by Steve Ditko; A woman accused of witchcraft is exonerated, but discovers that her fiancé really is a witch