Godzilla vs Kong: Sizing Up Kong 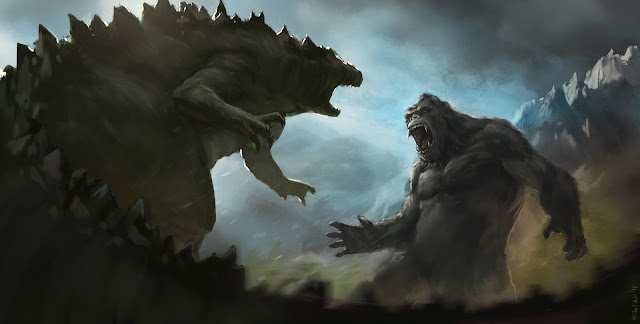 From Comic Book By Megan Peters

Godzilla vs Kong is shaping up to be one of the most epic films of 2020, and kaiju fans are keeping a close eye on the film. In the next few months, fans will learn all-new details about the flick, but a resurfaced interview is addressing one of the bigger questions fans has about King Kong.

Of course, fans want to know how King Kong could possibly stack up to Godzilla, and Adam Wingard has some things in store for the famous ape.

ecently, the fan-site Gormaru resurfaced an interview they did with Wingard shortly after he was confirmed to be directing Godzilla vs Kong. It was there the filmmaker talked loosely about Kong, and he said he's excited to evolve the monster on the big screen.

"Obviously, I think Kong we will evolve quite a bit because he's been on Skull Island for some time since the 1970s. It'd be kind of interesting to see how he looks in this movie, and I have some pretty cool ideas of what I want to do with him," Wingard said.

When asked how Wingard will take care of Kong in the film, the director said his first order of business will be to size up the monster.

"Kong is definitely bigger now, and they do imply in the last film that he's still growing. There's a lot of stuff to figure out there... It really is important to look at those characters and how they interact with one another," he explained.

In the months since this interview went live, Godzilla vs Kong has made some serious progress. The film has already finished filming well before its March premiere. The release of Godzilla: King of the Monsters also reminded audiences of the MonsterVerse, but the sequel did have a rather disappointing box office. Still, executives at Legendary Entertainment are optimistic about this crossover, so Kong lovers shouldn't get too upset just yet.

Godzilla vs. Kong is currently slated for a release March 13, 2020, and it sounds like things are moving along perfectly. The final film on Legendary's MonsterVerse quadrilogy is officially described as such, "In a time when monsters walk the Earth, humanity’s fight for its future sets Godzilla and Kong on a collision course that will see the two most powerful forces of nature on the planet collide in a spectacular battle for the ages. As Monarch embarks on a perilous mission into uncharted terrain and unearths clues to the Titans’ origins, a human conspiracy threatens to wipe the creatures, both good and bad, from the face of the earth forever."

It’s been years since audiences last saw two of cinema’s most notorious monsters of all time, Godzilla and King Kong, battle each other head to head. Though the pair first met on screen in the ...

Production crews began filming “Godzilla vs. Kong”on Oahu Monday, and have already worked at various sites, including the USS Missouri, Manoa Falls and downtown Honolulu. They have also set up camp at Lanai Lookout along Kalanianaole Highway, and the parking lot remains closed until Nov. 21, according to ...

King Kong And Godzilla Set To Rumble Down Under

"When I met with Legendary Pictures executives about Godzilla vs. Kong in Los Angeles in June, I mentioned our world-class facilities, talent and expertise we have in Queensland and they made specific mention of how the Dora offset deal dealhas ...
By Ken Hulsey - August 21, 2019