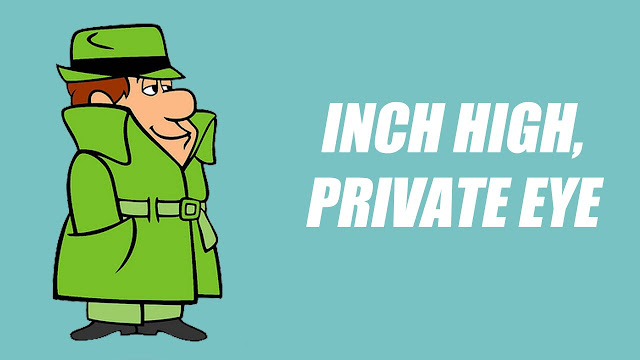 Inch High, Private Eye is an animated series produced by Hanna-Barbera for NBC's '73-'74 Saturday Morning line-up. It debuted 8 September 1973 and ended 31 August 1974, running for 13 episodes. Its place on the schedule was at 8:30am in the Fall of '73 (between Lidsville and The Addams Family) before moving to 9:30am in the Spring of '74 (between Emergency +4 and Butch Cassidy and the Sundance Kids).

Inch High is a miniature private investigator who works for the Finkerton Detective Agency. He often gets under the skin of his irascible boss, Mr. Finkerton. Inch is assisted by his cute and clever niece Lori, their musclebound and somewhat oafish friend Gator, and their ever-loyal St. Bernard, Braveheart. The group travels from case to case in the "Hushmobile", a futurist car that practically glides on air and is super-quiet. Inch's "inch high" size often lands him precarious situations while on the job either digging for clues or confronting suspects. Despite his less than intimidating size, Inch is a gun-ho, no nonsense P.I. who takes what he does very seriously.

Inch High (voiced by Lennie Weinrib) - "The world's biggest little detective", Inch is the titular character, a P.I. who is quite literally only around an inch high. Popular voice actor Lennie Weinrib (also the voice of H.R. Pufnstuf, and the original Scrappy-Doo, as well as The Joker, The Penguin, and Commissioner Gordon for Filmation's The New Adventures of Batman, and many, many others) plays Inch High as a perfect blend of comedy legend Jack Benny and Don Adams' Maxwell Smart from Get Smart. In fact, Inch High can often be heard exclaiming "Now cut that out!" or "Sorry about that, Chief!", signature catchphrases of both Benny and Adams, respectively. 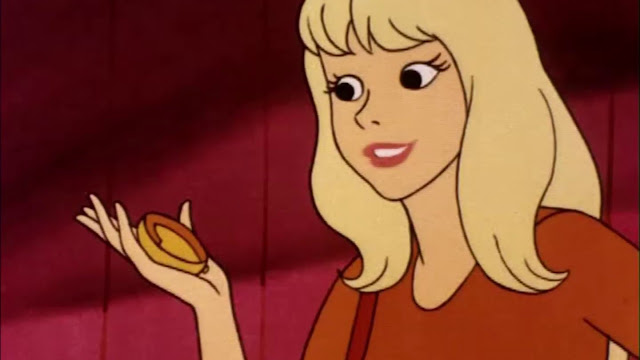 Lori (voiced by Kathy Gori) - Lori is Inch High's niece and an invaluable part his crime solving team. Lori's "Uncle Inch" has been known to go undercover as part of her necklace or do some spying from inside her purse, and can contact Lori through her Compact-phone. The character of Lori seems to have been inspired by the Partridge Familys own Laurie Partridge (played by Susan Dey), which may explain why Lori's name sometimes mistakenly appears as "Laurie" instead. Actress Kathy Gori is probably most familiar to cartoon fans as the voice of the leggy telephone operator, Rosemary of Hong Kong Phooey fame.

Now For A Word From Our Sponsor:

A.J. Finkerton (voiced by John Stephenson) - Mr. A.J. (his real name might actually be Elray) Finkerton is the cantankerous head of the Finkerton Detective Agency (a send up of the famous, real-life Pinkerton Detective Agency) who dreams of one day firing Inch High...this time for good! . Finkerton looks like Mr. Drysdale (Raymond Bailey) from The Beverly Hillbillies and acts and sounds like the great Joe Flynn (Capt. Binghamton of McHale's Navy). Renown voice actor John Stephenson (the voice behind The Flintstones Mr. Slate, zookeeper Eustace P. Peevly on Help!... It's the Hair Bear Bunch!, the original voice of Jonny Quest's father, Dr. Benton Quest, and a whole host of others) channels Flynn to perfection.

Gator (voiced by Bob Lutell) - Every crime solving team needs muscle and that's "Mr. Inch's" and "Miss Lori's" friend, Gator. Gator is a good-natured, yet dimwitted fellow who drives the group's stealthy electric Hushmobile and longs to one day be a full-fledged detective. Gator is also a master of "1,002 disguises" (including: a granny, a servant girl, and 1,000 others). Gator may have been loosely based on Jethro Bodine from The Beverly Hillbillies (played by Max Baer Jr.) and Jim Nabor's Gomer Pyle of The Andy Griffith Show with his southern accent, brute size, and child-like naivety.

Braveheart (voiced by Don Messick) - Braveheart is Lori's lovable St. Bernard and loyal member of her uncle's crime solving team. Unfortunately, Braveheart usually has trouble staying awake while on guard duty. Inch often can be seen getting a better view of the action atop Braveheart's nose. Braveheart's voice is provided by the one and only Don Messick (also the voice of The Jetsons famous canine, Astro, Papa Smurf, Hampton J. Pig of Tiny Toon Adventures, the snickering Muttley from Wacky Races and Dastardly and Muttley in Their Flying Machines; he's the most recognized voice for both Jonny Quest's father, Dr. Benton Quest and Scrappy-Doo, and of course, none other than Scooby-Doo himself, not to mention tons more)!

All Information from Hanna-Barbera

This has to be seen to be believed:

Here are some photos from "Inch High Private Eye": 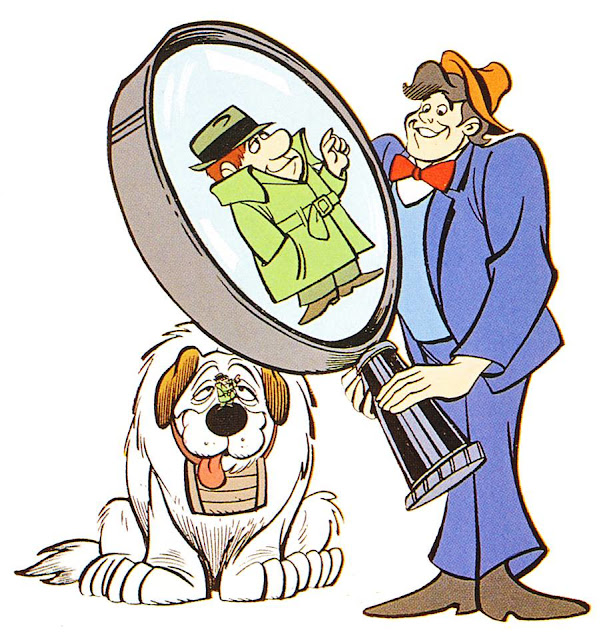 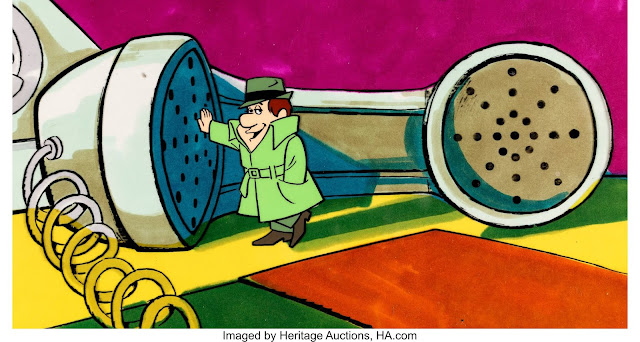 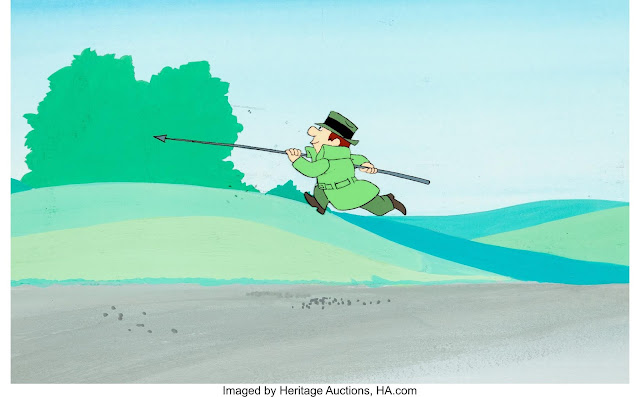 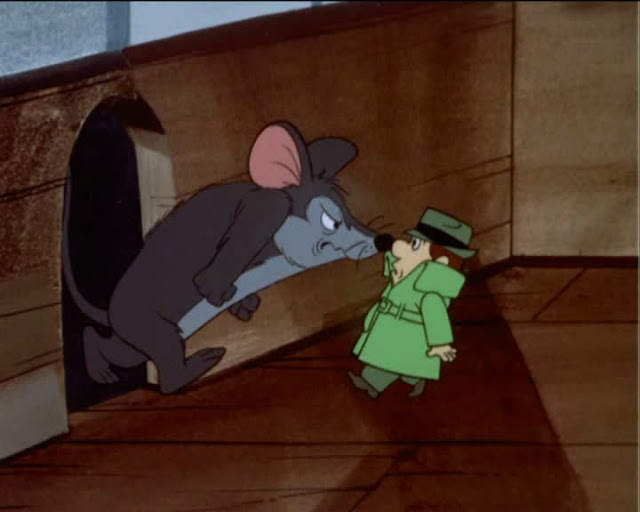 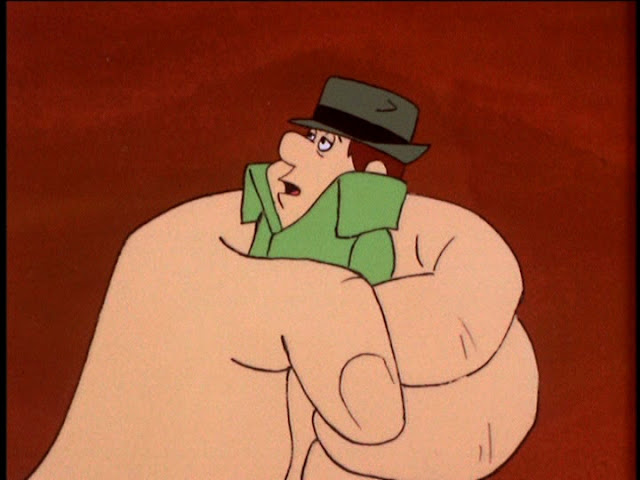 Here is a bonus episode of "Inch High Private Eye":

Let's pay the bills with another message from our sponsors: 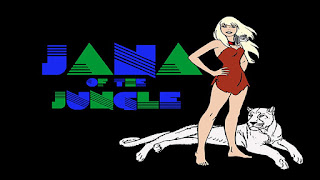