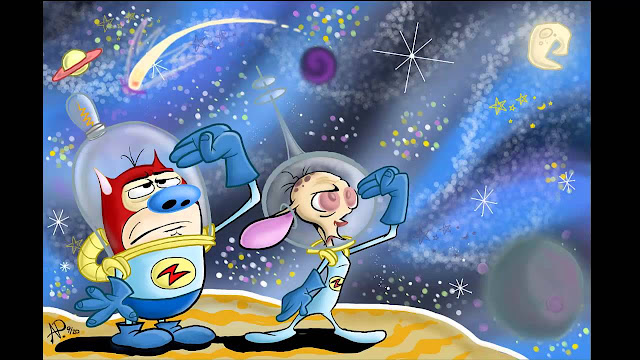 Ten, nine, eight, seven, six, five, four, three, two one! Blast off to adventure in the amazing year four hundred billion, with Commander Hoek and his faithful companion, Cadet Stimpy! As they roam the endless uncharted regions of space at speeds so fantastic, they throttle the imagination!

"I know what you want! You coveteth my ice cream bar!" 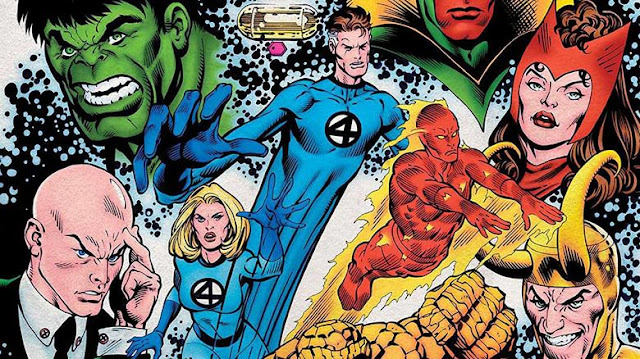 Marvel has been celebrating 80 years of stellar storytelling this year, putting the spotlight on the history of the comics and how Marvel will soar into the future. One book putting all this history into one place is HISTORY OF THE MARVEL UNIVERSE, written by Mark Waid with art by Javier Rodríguez and Álvaro López. This timely tome began in July, with an adult Franklin Richards asking Galactus to tell him the story of the Marvel Universe as they faced the end of that universe as they knew it. With the help of Marvel editors and an at-the-ready research team, Waid mapped out that very tale. As the series heads into issue #3 -- on sale Wednesday, September 18 -- Waid gave fans a preview of what we can expect in the next chapter of HISTORY OF THE MARVEL UNIVERSE and how he put it all together.

The first issue of HISTORY OF THE MARVEL UNIVERSE revealed the beginning of many of Marvel’s overarching groups, gods, races, etc. – the literal beginning of the Marvel Universe. The next issue went into the early years of Marvel, the Golden Age, and the heroes that predate modern characters while setting up some of those characters. The third issue promises to go through the “Age of Heroes” – what can you tell us about the next chapter in the history of the Marvel Universe?

It covers the birth of the Fantastic Four to the death of Jean Grey, a period during which Marvel introduced approximately 6,278 new heroes, all of whom Javier seems to have delineated in beautiful detail. I'm exaggerating, but not by as much as you'd guess. Seriously, the guy's a madman.

One of the most fascinating part of this series is how it puts the entire Marvel Universe into the context of a chronological timeline. How did you go about organizing every event in chronological order?

I woke up thinking about this for some reason:

In the episode, Ren and Stimpy take the role of Commander Hoek, a space captain, and loyal Cadet Stimpy, his loyal second-in-command. Ren is writing his captain's log as Stimpy is operating the ship. Ren says in his diary that he and Stimpy are on a 36-year mission to the Crab Nebula, having made the trip dozens of times. Ren tells the viewer that he heard how sometimes, people go insane from long trips and end up getting 'space madness' but scoffs at it. Ren tells Stimpy to commence a relaxation period and the two get on break, not having to be on duty for another six years. They sit in a break room staring at each other. When Stimpy asks Ren what he wants to do, he suggests they spend some quality time together. Ren's patience quickly wears thin, and he lashes out at Stimpy simply because the latter keeps idly drumming his fingers on the table. Ren apologizes, as he thinks he might've gone crazy from being cooped up and Stimpy suggests that they eat a hot meal. Stimpy goes off to get the three course meal, which turns out to be three different flavors of meal-substitute paste. Ren bangs his head on the table, as Stimpy comforts him. 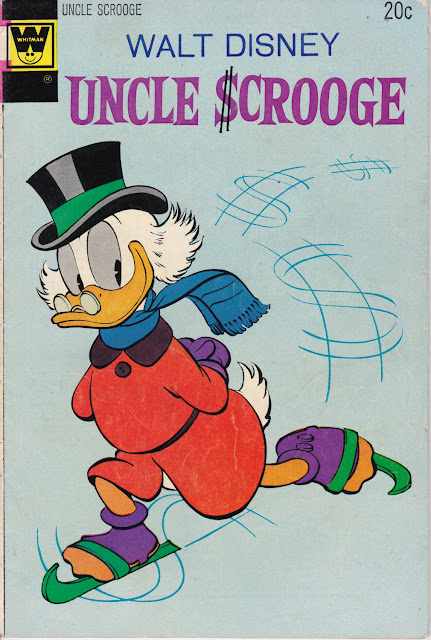 Whitman edition. Uncle Scrooge in "The Mysterious Unfinished Invention" in which Scrooge, Donald, and the nephews run into mystery, adventure, and the Beagle Boys on an uncharted island, a Carl Barks reprint from issue number 8. When this story first appeared in issue number 8, it was untitled. In this reprint, it is titled. 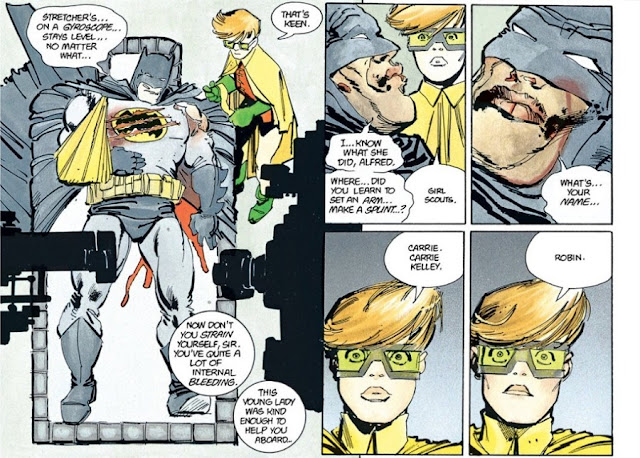 Many have worn the mantle of Robin. The first was a young orphan called Dick Grayson, the second was a troubled boy named Jason Todd, and though you may think that the third was Tim Drake, it was actually a 13-year-old girl known as Carrie Kelley who first appeared in the pages of 1986's Bat-Smash, The Dark Knight Returns #1. Created by Frank Miller, Carrie upset the idea of what a sidekick should and could be. She wasn't a lonesome child who needed looking after. In fact, she actually sought out Batman and the role of Robin after the cranky hero saved her from a Mutant attack. After using her lunch money to buy a Robin costume, she took to the streets, redefining the silhouette and spirit of the Caped Crusaders forever!

Unlike the other kids who took on the responsibility of being Robin before her, Carrie isn't an orphan—though her parents are never actually seen in the comics—and she comes right out of the gate taking action in a way that immediately sets her apart and proves just how fearless she truly is. On a dark Gotham night, as Batman is getting pummeled by the Mutant Leader, Carrie saves him by jumping onto the back of the terrifying gang leader and scratches at his eyes until he frees Batman. Though Bruce had technically retired after the death of Jason Todd and the utilitarian government bringing in strict anti-superhero laws, Carrie's actions inspire Bruce to become the hero he once was even though the city he loves has changed beyond recognition. 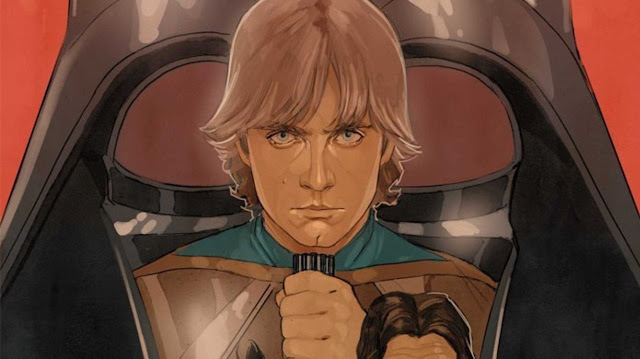 Marvel's Star Wars Series Is Coming to a Close This November

One of the most popular ongoing series at Marvel Comics—whose debut issue still holds the title as the only comic book this century to sell over one million copies—is coming to a surprise end. But it may not be that surprising, and it’s likely not the actual end.

We reached to Marvel Comics to clarify the details of the solicit, and a spokesperson for the publisher confirmed that Star Wars #75 is indeed the final issue of the series and that fans can expect to learn more about the future of the title next month. 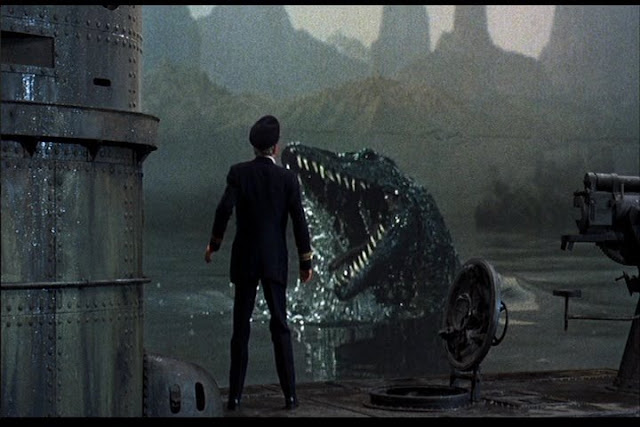 In the early 1970s’ Amicus Pictures (Owned by Milton Subotsky and Max J Rosenberg) decided to pump so life into the declining British fantasy film industry by bringing the works of Tarzan creator Edgar Rice Burroughs to the big screen. The company’s rival, Hammer, had abandoned its standard horror films for features starring half naked women in an attempt to put more bodies in the seats and the time seemed right for Burroughs strait forward action tales to fill the void.

The first of the four Burrough’s stories to be produced by Amicus would be an adaptation of the short story “The Land That Time Forgot” which was first published in Blue Book Magazine in 1918. Milton Subotsky had first penned a screenplay for the film back in the early 1960s’ but this first draft was initially rejected by the late Burrough’s estate. It was under their prodding that the script was rewritten by Jim Cawthorn and Michael Moorcock. Their dialogue heavy, light on the action script however didn’t meet Subotsky’s approval so it was reworked yet again.