King Kong: A Monster of Creation's Dawn Breaks Loose in Our World Today! 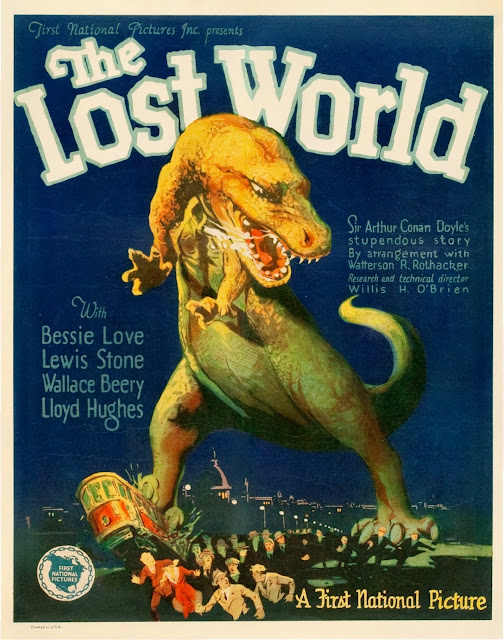 The 1925 Dinosaur Movie That Paved the Way for King Kong

Sir Arthur Conan Doyle always intended The Lost World to be a simple adventure story. Published in 1912, many years after Doyle had established himself as the popular creator of Sherlock Holmes, the novel followed a bullish scientist named Professor Challenger on his expedition to South America, where, he claims, dinosaurs still roam the land.

It was a “type of escapist adventure fiction that emphasized exotic settings, slam-bang action, and two-fisted, square-jawed heroes,” in scholar Gary Hoppenstand’s estimation, the kind already popularized by Sir H. Rider Haggard with King Solomon’s Mines. But the eventual movie adaptation of The Lost World would turn Doyle’s familiar sci-fi story into something much grander in scale. Through the pioneering special effects of Willis O’Brien, this silent film would lay the foundation for a wave of monster movies—most notably O’Brien’s career-defining work, King Kong. Like any good monster movie, it subtly commented on the fears of its author and audience.

Long before First National Pictures began production on Doyle’s dinosaur story, a young marble cutter named Willis O’Brien was sculpting tiny T-Rex figurines. According to The New York Times, O’Brien began experimenting with animation models during an apparently slow day at work. Inspired by his background in boxing, he molded a mini fighter out of clay. His coworker whipped up another clay champion, and pretty soon the two men were acting out a full boxing match with their primitive action figures. Lo and behold, O’Brien’s next production was a short test film featuring a cave man and a dinosaur (made of modeling clay and wooden joints) shot atop the Bank of Italy Building in San Francisco.

My Mother’s Romance With King Kong

From The Daily Beast

This month marks the 86th anniversary of the 1933 world premiere of King Kong in New York. Klieg lights swept the skies over Radio City Music Hall and the RKO Roxy across the street, where a combined audience of 9,000 filled every seat, that night and for weeks to come. Two weeks later, the film premiered at Grauman’s Chinese Theater in Hollywood. In both cities the film astounded and delighted the public. Its success saved the RKO studio from bankruptcy and some say it even saved the motion picture industry, reawakening public excitement in movies when the business was struggling to attract audiences in the hard times that had gripped the country.

My mother, Fay Wray, has been inextricably tied to Kong ever since it opened. Playing her signature role, Ann Darrow, the damsel-in-distress who captures King Kong’s heart, is how most people remember her today, even though she starred in over 100 other films with actors like Gary Cooper, Spencer Tracy, and William Powell—all great, but none, apparently, the equal of the mighty Kong. At times she wished she might be remembered for some of her other roles as well. Yet she grew to appreciate—dare I say love?—Kong, and the role he had played in her life. 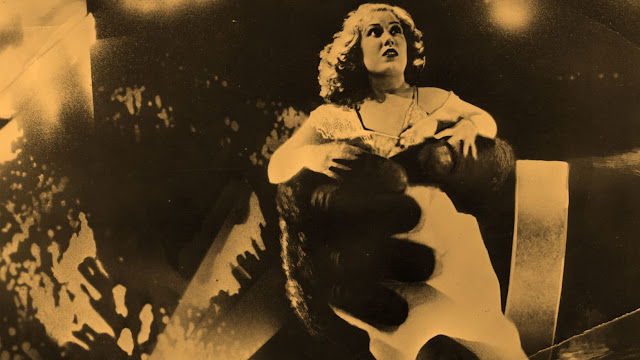 “Every time I walk by the Empire State Building,” she once said, “I look up and say a little prayer. A good friend of mine died up there.” 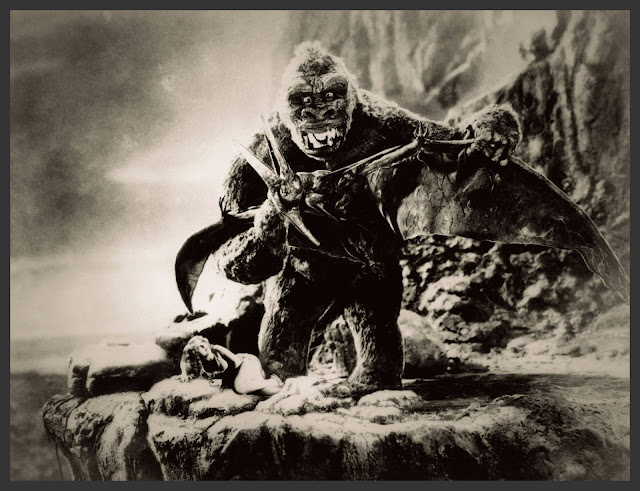 This is a poster graphic print featuring an image of King Kong defending Ann Darrow from a flying dinosaur. The print looks amazing matted to 8 x 10 to 20 x 30 and framed and will make a great addition to your movie memorabilia collection. A must for all King Kong fans! 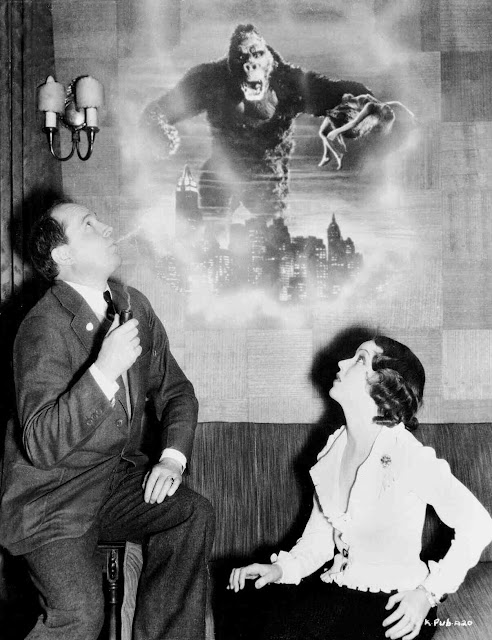 The momentum of the early 1930s keeps rolling in 1933, as a variety of studios celebrate the newfound profitability of the horror genre. Thanks to King Kong, this is a formative year for the idea of the “giant monster” movie, which you can argue exists somewhere outside of horror—but we think it, along with its progeny, belongs here. Certainly, nearly every “creature feature” for the next several decades is deeply indebted to King Kong, and few come anywhere close to matching up with it.

In Germany, operating under the watchful eye of the Nazi party (which would later ban the film), Fritz Lang produced The Testament of Dr. Mabuse, his last German-language film before emigrating to France and then the U.S.A. A crime drama with touches of the supernatural, it continued the story he first told in the silent, Expressionist classic Dr. Mabuse the Gambler. In only his second sound film, Lang showed his ability to grow and thrive with the change in technology, opting for a more naturalistic (but still thrilling) visual style than his earlier Expressionist work. It was experience that would serve him well as he went on to direct numerous film noir classics in the U.S. throughout the 1940s and 1950s.

On the Universal side of the spectrum, 1933 is home to The Invisible Man, which always stands as one of the more underrated entries in the original Universal Monsters canon. Claude Rains delivers a classic performance as the imperious and haughty Dr. Jack Griffin, who is turned invisible by a botched science experiment and slowly descends into delusions of grandeur. Less focused on atmosphere and gothic frights than Dracula or Frankenstein, and somewhat less concerned with its melodramatic love story than The Mummy, The Invisible Man is more like a madcap crime caper with horror elements, thriving on Rains’ hilarious vocals and surprisingly emotive, almost vaudevillian performance while wrapped in yards and yards of bandages. It’s not among the scariest classic entries in the history of Universal Horror, but it’s absolutely one of the most purely entertaining.

From The Long Island Weekly

When King Kong was released by RKO Pictures in 1933, the United States was in the throes of the Great Depression. The success of the film’s titular character not only spawned nine more films (the next one being a 2020 remake of King Kong Vs. Godzilla), but proved to be escapist fare for moviegoers of the time as well as future fans who would catch repeated screenings of the film on Saturday morning television. King Kong was created by American aviator, Army Air Service veteran and RKO Studios exec Merian C. Cooper, who was inspired by a childhood fascination with apes and a dream he had of a giant gorilla terrorizing New York City. 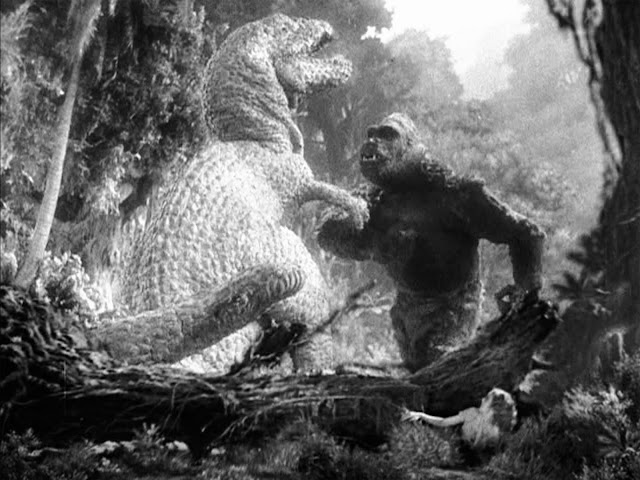 The film was directed and produced by Cooper and Ernest B. Schoedsack, both of whom have cameos piloting the plane that finishes off Kong. Fay Wray starred as femme fatale Ann Darrow, Robert Armstrong played Carl Denham (a stand-in for Cooper) and Bruce Cabot played love interest Jack Driscoll. The special effects featured a main Kong model made of foam rubber, latex and rabbit fur and were groundbreaking in the way silent film applications like stop-motion animation, matte painting, rear projection and miniatures were used. (Effects technician mastermind Willis H. O’Brien was the mentor to assistant Ray Harryhausen, a future visual effects pioneer). The movie made $2 million in worldwide rentals on its initial release and had an opening weekend of $90,000 in box office receipts. 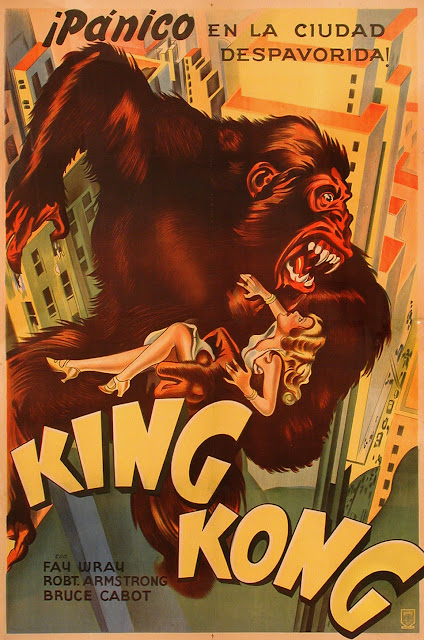 THE MONKEY AND THE ARTISAN: THE IMPORTANCE OF KING KONG AS ART

Lately, I’ve been reading Ray Morton’s From Fay Wray to Peter Jackson. One entry on King Kong as “pure cinema” stuck out at me and I started thinking about what else I’ve read on film theory in academia. I realized Kong, renowned as it is for its spectacle and pop cultural significance, contributed a lot to cinematic art at a crucial time of transition in movie history, beyond simple spectacle. Morton writes:

“I think that Kong’s grip can best be explained by the fact that it is a breathtaking work of pure cinema — a stellar example of the twentieth century’s most powerful art form…It is only through the cinema’s unique and alchemic mixture of image, movement, and sound that Merian C. Cooper’s strange and fantastic tale can come roaring to life and fulfill its incredible potential to amaze, to terrify, and, ultimately, to move…King Kong is a supreme example of the power and the magic of the movies.”

In terms of “pure cinema,” we have to establish an idea of what pure cinema is in relation to Kong. From a technical standpoint, pure cinema is the artful symmetry of combined images and sounds. Going by Morton’s words, we have to think of it as anything that moves its audience and sticks with them, to the point of achieving immortality in the eyes of the spectator, and principally in pop culture. 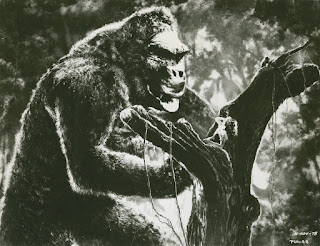 Hail To The King! - A Film History Of Kong