The Mummy: Stranger than "Dracula" ... More fantastic than "Frankenstein" ... More mysterious than "The Invisible Man" 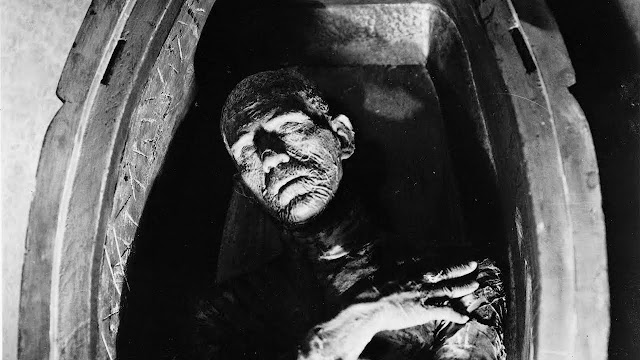 THE MUMMY (1932) STILL LOOMS OVER THE LANDSCAPE OF MONSTER MOVIES

The Mummy has always been there. Like the best monsters, this creature is omnipresent and unsettling. This is how I felt when finally sitting down to watch the original 1932 version of this Universal creature. The Mummy, along with other seminal creatures, like Dracula and Frankenstein, is something you know even before you have seen it. Whether it was from Saturday Morning Cartoons like Scooby-Doo or dime store Halloween costumes, the Mummy is an absolute fixture. My own personal introduction, strangely, was in a comedy I watched with my father, Abbott & Costello Meet The Mummy. Of course, there have been the remakes, whether it be this weekend’s Tom Cruise/Sofia Boutella action spectacular or the Indiana Jones inspired action adventure starring Brendan Fraser and Rachel Weisz. These remakes seem to take a lot of inspiration from the love story of Imhotep and Ankh-es-en-Amon and add many minutes to the runtime in the form of special effects and action sequences.

And even though it is a story that has been retold, the original Mummy is not what you might expect. It is not a typical monster movie, nor is it genuinely frightening, at least to modern viewers. More than anything, The Mummy is a romance that spans literal centuries. It is also clearly a reaction to the mania surrounding ancient Egypt at the time. From a cinema standpoint, it is a strange (and short) film with some tremendous bookends. The opening sequence could teach contemporary directors and cinematographers a great deal about building tension by subtle camera moments and not giving in to the gotcha moment. Karl Freund, directing his first film (although, he was the cinematographer of Dracula), takes the prologue, which amounts to a solid chunk of the film, and teases us with shots of the mummy just out of frame and relying purely on the supporting characters reaction to him to carry the moment. This is a departure from many films of the time, which were inspired by the theater and kept the camera static and let the drama unfold in front of the audience. Freund’s decision is one that not many directors of any era would make and it succeeds in keeping us on the edge of our seats. The other bookend is, of course, the destruction of our villain (or is he?). This is led up to by another wonderful directorial choice to show us his past in a reflective pool which looks almost like another screen for the audience, as well as Ankh-es-en-Amon, to look through.

But what about the middle? Well, that will be much harder to grasp for modern audiences. Our romantic leads, played by Zita Johann and David Manners, are pretty standard melodrama stand-ins. It’s not that their romance does not work, it is that it is dwarfed (physically and metaphorically) by the love that Imhotep carries for her other self, that of Ankh-es-an-Amon. So, it’s not so much that these actors are terrible, but rather that Boris Karloff is a giant in the industry and completely owns every scene in which he appears. This is so true that any moment he is not on screen, the mind tends to wander towards what he could be doing in the interim. In that middle, there are some other wonderful moments of gleeful villainy from Imhotep. He quite literally looms over the action through his reflective pool and terrifying powers. As in any good monster movie, no character feels safe, even when he is not physically present. The efficiency with which this is accomplished is particularly impressive. Imhotep is a deeply flawed, but complete character. We understand his reasoning, even as his actions become more despicable. This, along with Karloff’s performance help us empathize with him, maybe even too much. The film may be designed for us to also root for the two new lovers, but many audiences found themselves fully in the camp of Karloff and the mummy. 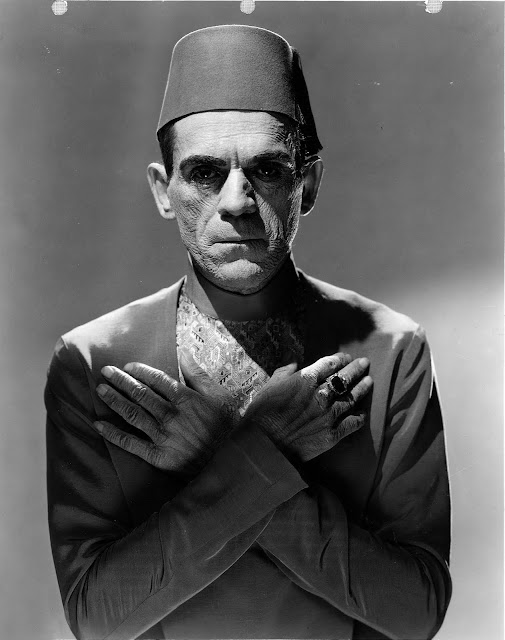 The modern horror film can trace its roots back to the experimentation of German expressionist filmmaking in the second decade of the 20th century. The country’s filmmakers were especially influenced by the breakout of WWI in 1916. During the war, Berlin became isolated, and there was increased demand for locally produced films. A depressed national sentiment associated with the war as well the resulting sociological and economic impact on domestic life resulted in films that depicted human psychological distress, darkness, and surrealism. The birth of the horror genre came from the rejection of the romantic themes typically found in films of the time period. While there had been films with horror tendencies and plots made previously, it was the influence of these German expressionist filmmakers which helped to spark interest in the genre moving forward.

These German expressionist films may not be necessarily well-known today, but they were a major influence on Hollywood’s first major foray into horror, which helped to establish the genre in the mainstream. Starting with 1923’s The Hunchback of Notre Dame, Universal Studios began what would later become an entire franchise devoted to darker, more sinister storylines (even if they had comical tones, at times). Today known as the Universal Classic Monsters, these films centered around fictional monsters, many of which had recurring roles over several films. Universal’s Classic Monsters franchise introduced American audiences to horror for the first time, and would help to establish many traits of the genre we recognize today. This month we are investigating the most prolific Universal Classic Monsters, reviewing their on and off-screen origins, and most memorable films. Today, we look at The Mummy!

Unlike Frankenstein’s monster or Count Dracula, The Mummy was a character created specifically for film. However, the famous monster was inspired by a number of real-life events. The popularity and success of Universal Studios’ Dracula and Frankenstein films pushed the producers to find new characters for additional films. In 1922, archeologist Howard Carter discovered the tomb of the ancient egyptian pharaoh Tutankhamun, more commonly known as King Tut. This discovery and opening of the tomb was well-publicized at the time, and it sparked world-wide interest in ancient Egypt when mysterious happenings began occurring shortly after. On the day Carter opened the tomb, it was reported that he sent a boy on an errand at his residence, and the boy found a cobra had eaten Carter’s pet Canary. The Cobra was used as a representation of the Egyptian monarchy, and this finding was seen as a curse in response to Carter’s intrusion. 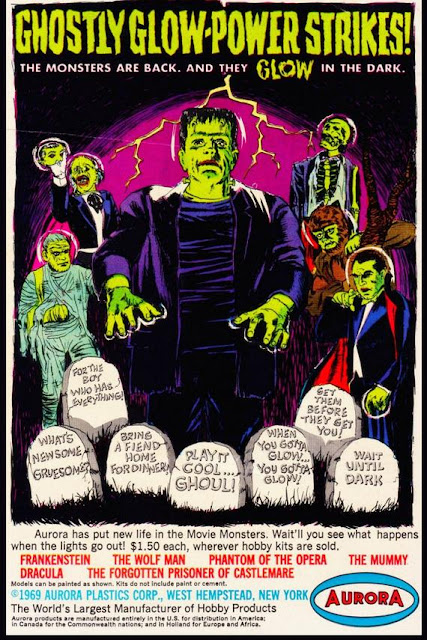 What a great poster right out of the comic books of our youth! Aurora Monster Models – turning every boy’s dream into a nightmare! Monster-model madness descended upon the youth of America in the 1950s, when Universal Pictures’ classic horror films enjoyed a resurgence in popularity. Universal had launched the golden age of monster movies in 1931 with its adaptation of “Dracula” starring Bela Lugosi, followed quickly by “Frankenstein” with Boris Karloff. The hits continued throughout the 1940s with movies like “The Wolf Man,” “Creature from the Black Lagoon,” “The Mummy,” “The Phantom of the Opera,” and “The Bride of Frankenstein.” But in 1956, when Universal licensed its monster movies to television stations, the studio unleashed a new craze for the films’ spooky stars. 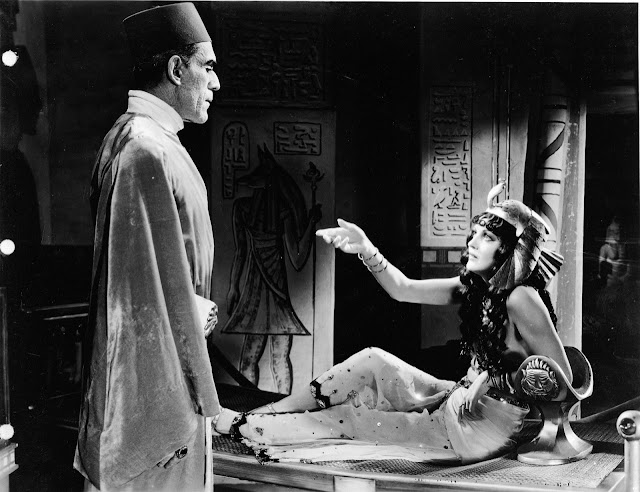 From Inside The Magic

Classic monsters like Dracula, Frankenstein’s monster, the mummy, the invisible man, the wolf man, and the creature from the Black Lagoon paved the path for modern horror marvels. Turning terror mainstream, these familiar faces of fear demonstrated that horror has a home in motion pictures.

Several of these favored fright feasts began life a literary horror. Authors like Braham Stoker, Mary Shelley, and H.G. Wells. Others rose from the grave as original nightmares created specifically for Universal Pictures.

Universal Studios, in 1923, took a gamble with their production of “The Hunchback of Notre Dame” (1922). “Hunchback,” which did better than other film Universal released that year, catapulted Lon Chaney into the spotlight, due to the brilliant star’s passion for perfect make-up (which he did himself). To showcase Cheney’s talents, Gaston Leroux’s “Le Fantome de l’opera” novel became the studios next feature. “Phantom of the Opera,” released in 1925, also gave birth to the horror genre of fear fed films. 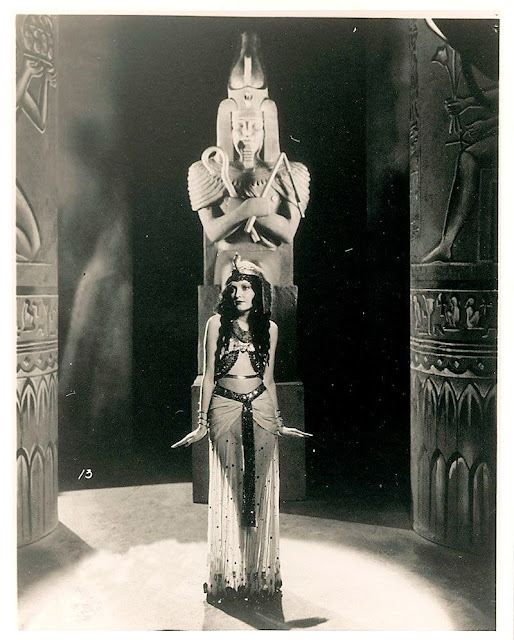 Hollywood Flashback: Universal's 'Mummy' First Rose From the Dead in 1932

In 1932, THR was certain Carl Laemmle Jr.'s Universal Pictures was going to have a hit with The Mummy. The film stars Boris Karloff, the then-44-year-old English actor who THR said "steals the picture. He is weird, terrifying."

While the newest version of The Mummy, out June 9, has an ancient avenging princess going up against Tom Cruise, Karloff played the Egyptian priest Imhotep returning to life. The reanimated 3,700-year-old mummy immediately goes looking for his love, Ankhesenamon, who he believes has been reincarnated as a Cairo woman named Helen. "My love has lasted longer than the temples of our gods," is one of Imhotep's many pickup lines. (The relationship ends badly.) It featured the directorial debut of Karl Freund, who had done Fritz Lang's camera work on 1927's Metropolis. When he returned to cinematography, Freund received an Oscar for 1937's The Good Earth and in the 1950s lensed 149 episodes of I Love Lucy.

"The original Mummy really was a profound inspiration," says reboot producer Sean Daniel. "Karloff, Freund and Laemmle created a seminal work." And THR was right about the film being a hit: The $196,000 production ($3.5 million today) had by 1937 made $596,000 ($11 million currently). 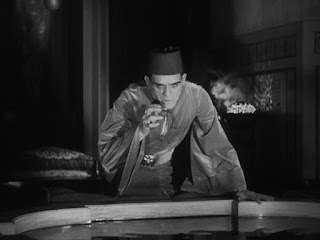 One Girl And Too Many Monsters!