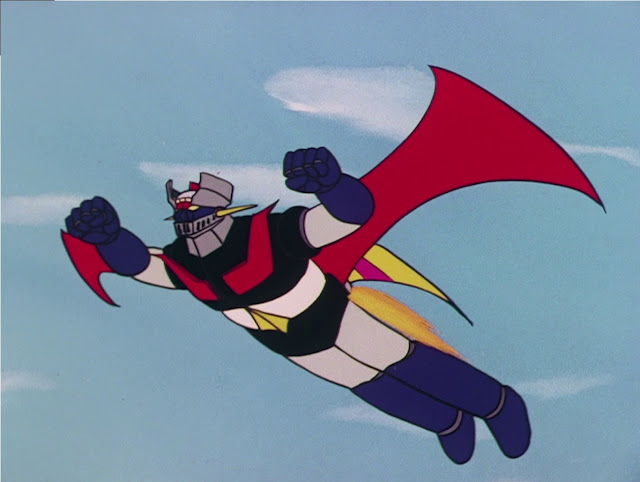 Mazinger Z is a Japanese super robot manga series written and illustrated by Go Nagai. The first manga version was serialized in Shueisha's Weekly Shōnen Jump from October 1972 to August 1973, and it later continued in Kodansha TV Magazine from October 1973 to September 1974.[3] It was adapted into an anime television series which aired on Fuji TV from December 1972 to September 1974. A second manga series was released alongside the TV show, this one drawn by Gosaku Ota, which started and ended almost at the same time as the TV show. Mazinger Z has spawned several sequels and spinoff series, among them being Great Mazinger, UFO Robot Grendizer and Mazinkaiser.

Mazinger Z is an enormous super robot, constructed with a fictitious metal called Super-Alloy Z (超合金Z, Chōgokin Zetto), which is forged from a new element (Japanium) mined from a reservoir found only in the sediment of Mt. Fuji, in Japan. The mecha was built by Professor Juzo Kabuto as a secret weapon against the forces of evil, represented in the series by the Mechanical Beasts of Dr. Hell. The latter was the German member of a Japanese archeological team, which discovered ruins of a lost pre-Grecian civilization on an island named Bardos, the Mycéne Empire. One of their findings was that the Mycene used an army of steel titans about 20 meters in height. Finding prototypes of those titans underground which could be remote-controlled and realizing their immense power on the battlefield, Dr. Hell goes insane and has all the other scientists of his research team killed except for Professor Kabuto, who manages to escape. The lone survivor goes back to Japan and attempts to warn the world of its imminent danger. Meanwhile, Dr. Hell establishes his headquarters on a mobile island, forms the new Underground Empire, and plans to use the Mechanical Monsters to become the new ruler of the world. To counter this, Kabuto constructs Mazinger Z and manages to finish it just before being killed by a bomb planted by Hell's right-hand person, Baron Ashura, a half-man, half-woman. As he lays dying, he manages to inform his grandson Kouji Kabuto about the robot and its use. Kouji becomes the robot's pilot, and from that point on battles both the continuous mechanical monsters, and the sinister henchmen sent by Doctor Hell. 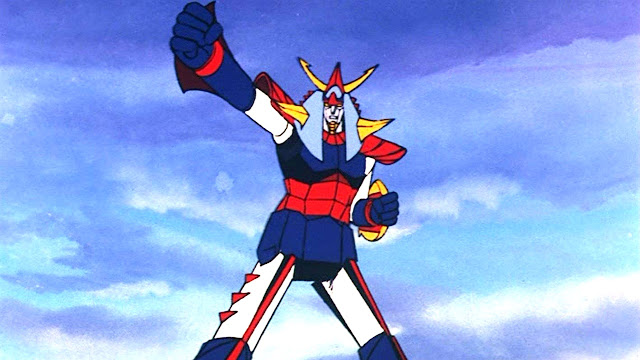 Brave Raideen is a super robot anime series. Produced by Tohokushinsha, Asahi News Agency and Sunrise, it aired on NET (now TV Asahi) from 4 April 1975 to 26 March 1976, with a total of 50 episodes. The official name being Raideen the Brave, it is mainly known as "Brave Raideen" or "Heroic Raydeen". A series called Raideen the Superior (超者ライディーン) was broadcast from 1996 to 1997 on TV Tokyo, and another series called Reideen was broadcast in 2007 on WOWOW.

After a slumber of twelve millennia, the Demon Empire awakens to seize control of the Earth. Raideen, the giant robot-like protector of the lost continent of Mu, senses the evil presence and awakens within its golden pyramid. A young Japanese boy, Akira Hibiki, is alerted about the Demon Empire by a mysterious voice and rushes to the pyramid. It is soon revealed that Akira is a descendant of the ancient people of Mu who must help Raideen save the Earth. Akira enters the robot by accelerating his motorcycle to a high speed and then throws himself upward, allowing a beam from the robot to pull him into the robot's head and into an internal cockpit from where he assumes control of Raideen. Akira is aided by Mari Sakurano, who happens to be the daughter of a prominent scientist, and his friends from the soccer club. Half way through the story the Demon Empire's master, Barao, is released from his statue prison and intends to finish what he started twelve thousand years earlier. 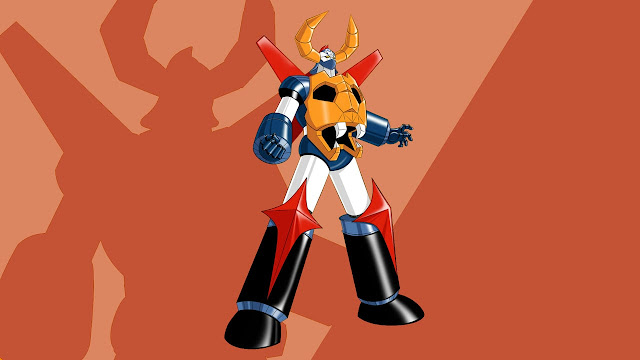 It ran from April 1976 through January 1977 and consisted of 44 episodes of 25 minutes each. Gaiking was notable for being one of the few super robot series to take place in real places outside Japan, and for being the first Super Robot series to have a mobile carrier for the chief robots. In the US, Gaiking was part of Mattel's popular Shogun Warriors import toy line of the late 1970s and Jim Terry's Force Five anthology series. In 2005, a remake titled Gaiking: Legend of Daiku-Maryu was produced.

The story chronicled the battle between the crew of the semi-transformable carrier Daikū Maryū (also called the Kargosaur in the Shogun Warriors toyline, and also known as the Great Space Dragon in the US English dub) and the Super Robot Gaiking invented by Dr. Daimonji (Prof. Hightech in the English-language version of the show or Dr. Diamond in Spanish version) against an invading race of aliens called the Dark Horror Army. This army hails from the planet Zela whose home planet is facing destruction by their star, Sigma, turning into a black hole as their population starts to become extinct. Notable aspects of the series include the dinosaur-based designs of the Daikū Maryū and its support machines and the use of part of the carrier to form the main robot. The robot Gaiking was piloted by former baseball star named Sanshiro Tsuwabuki (Sanshiro's name was changed to Aries Astonopolis for the English version with the carrier being called the "Great Space Dragon", a literal translation of "Daikū Maryū". Likewise, for the Latin America version the main character was called Brando Drummond and the carrier "Gran Dragon del Espacio") who was drafted for the job because his latent psychic powers made him the only one capable of doing so, all other similarly empowered candidates having been assassinated by alien agents with he himself having been injured in an attack that ended his sports career. Gaiking is most easily distinguished from other mecha by its skull-shaped golden torso formed from the head of the Daikū Maryū and its golden horns.

The leader of the Dark Horror Army was a robot scientist named Darius The Great or Dario el Grande in the Spanish version and all of their ships and mecha were fish-shaped, which most likely inspired the Darius series of video games. He uses four giant robotic leaders called the Death Cross Generals composed of Dr. Dankel, General Asimov, General Killer, and General Desmont. These generals used bomber-like spaceships called Grotectors to create artificial black hole vortexes to travel to Earth and back. Throughout the series the Death Cross Generals and Darius note that natives of Zela originally came to Earth for research purposes before slowly colonizing the planet and using it to hide various dark monsters with the rise of humanity, as far back as one million years before the start of the series until the twelfth century AD. For their military natives of Zela were brainwashed and genetically altered into birdmen called the dark avians with elite individuals becoming dark knights. 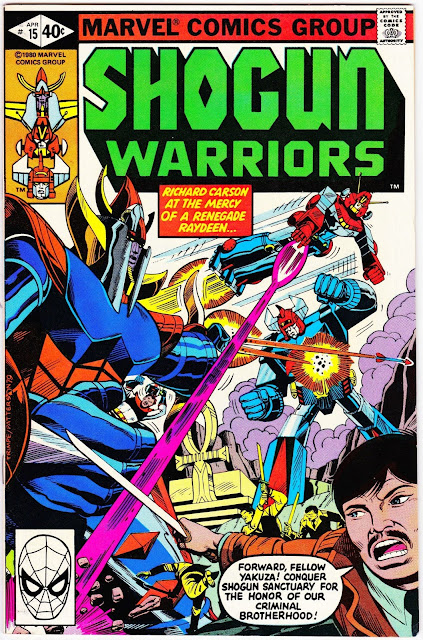 "The Insider!":
Shogun Sanctuary is under attack and when the mighty Raydeen is turned against them can even the Shogun Warriors win?

1st printing.
This comic book is in used condition and is complete with cover and all pages attached it has flaws that warrant a grade of NM.
Comic Book will be shipped bagged and boarded!