Retro Saturday Morning: The Adventures of Rocky and Bullwinkle and Friends (1959 - 64)(ABC/NBC) 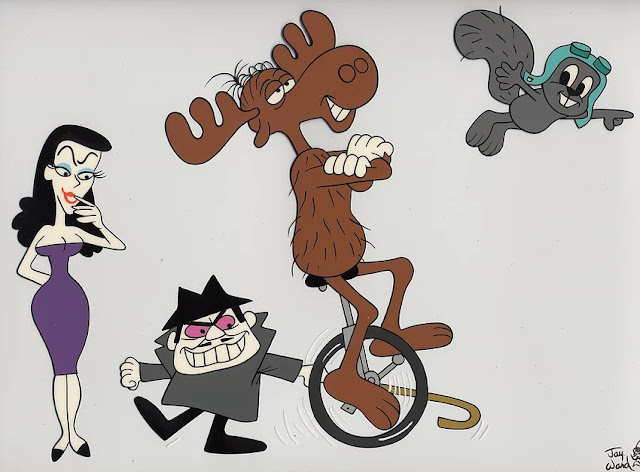 The Adventures of Rocky and Bullwinkle and Friends is the blanket title for an American animated television series that originally aired from November 19, 1959, to June 27, 1964, on the ABC and NBC television networks. The current blanket title was imposed for home video releases over 40 years after the series originally aired and was never used when the show was televised; television airings of the show were broadcast under the titles of Rocky and His Friends from 1959 to 1961, The Bullwinkle Show from 1961 to 1964, and The Rocky and Bullwinkle Show (or The Adventures of Rocky and Bullwinkle or The Adventures of Bullwinkle and Rocky) in syndication. Produced by Jay Ward Productions, the series is structured as a variety show, with the main feature being the serialized adventures of the two title characters, the anthropomorphic flying squirrel Rocky and moose Bullwinkle. The main adversariesin most of their adventures are the two Russian-like spies Boris Badenov and Natasha Fatale, both working for the dictator Fearless Leader. Supporting segments include Dudley Do-Right of the Mounties (a parody of old-time melodrama), Peabody's Improbable History (a dog named Mr. Peabody and his boy Sherman traveling through time), and Fractured Fairy Tales (classic fairy tales retold in comic fashion), among others.

The idea for the series came from Jay Ward and Alex Anderson, who previously collaborated on Crusader Rabbit, based upon the original property The Frostbite Falls Revue. This original show never got beyond the proposal stage. It featured a group of forest animals running a television station. The group included Rocket J. Squirrel (Rocky), Oski Bear, Canadian Moose (Bullwinkle), Sylvester Fox, Blackstone Crow, and Floral Fauna. The show in this form was created by Alex Anderson. Bullwinkle's name came from the name of a car dealership in Berkeley, California, called Bullwinkel Motors. Anderson changed the spelling of the last two letters of the name and gave it to his moose.

Ward wanted to produce the show in Los Angeles; however, Anderson lived in the San Francisco Bay Area and did not want to relocate. As a result, Ward hired Bill Scott as head writer and co-producer at Jay Ward Productions, and he wrote the Rocky and Bullwinkle features. Ward was joined by writers Chris Hayward and Allan Burns; the latter eventually became head writer for MTM Enterprises. In a 1982 interview, Scott said, "I got a call from Jay asking if I'd be interested in writing another series, an adventure script with a moose and a squirrel. I said, 'Sure.' I didn't know if I could write an adventure with a moose and a squirrel, but I never turned down a job." 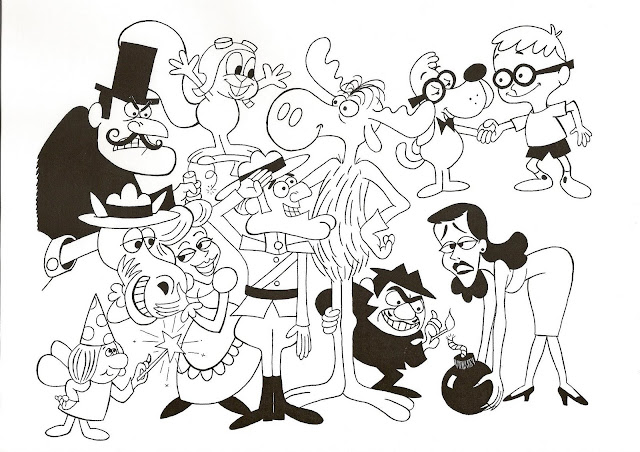 The series began with the pilot, Rocky the Flying Squirrel. Production began in February 1958 with the hiring of voice actors June Foray, Paul Frees, Bill Scott, and William Conrad. Eight months later, General Mills signed a deal to sponsor the cartoon program, under the condition that the show be run in a late-afternoon time slot, when it could be targeted toward children. Subsequently, Ward hired the rest of the production staff, including writers and designers. However, no animators were hired. Ad executives at Dancer, Fitzgerald, & Sample, the advertising agency for General Mills, set up an animation studio in Mexico called Gamma Productions S.A. de C.V., originally known as Val-Mar Animation. This outsourcing of the animation for the series was considered financially attractive by primary sponsor General Mills, but caused endless production problems. In a 1982 interview by animation historian Jim Korkis, Bill Scott described some of the problems that arose during production of the series:

"We found out very quickly that we could not depend on Mexican studios to produce anything of quality. They were turning out the work very quickly and there were all kinds of mistakes and flaws and boo-boos ... They would never check ... Mustaches popped on and off Boris, Bullwinkle's antlers would change, colors would change, costumes would disappear ... By the time we finally saw it, it was on the air." 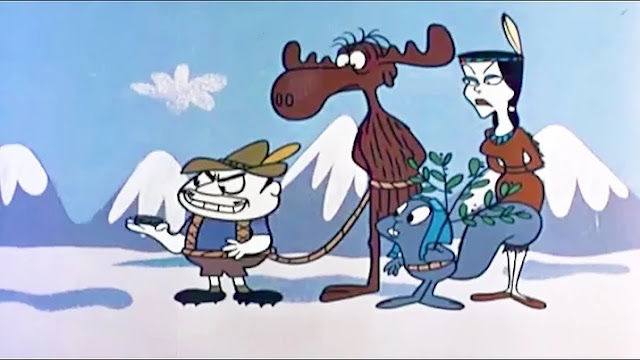 Rocky and Bullwinkle is known for quality writing and wry humor. Mixing puns, cultural and topical satire, and self-referential humor, it appealed to adults as well as children. It was also one of the first cartoons whose animation was outsourced; storyboards were shipped to Gamma Productions, a Mexican studio also employed by Total Television. The art has a choppy, unpolished look and the animation is extremely limited even by television animation standards at the time, yet the series has long been held in high esteem by those who have seen it; some critics described the series as a well-written radio program with pictures.

The show was shuffled around several times (airing in afternoon, prime time, and Saturday morning timeslots), but was influential to other animated series from The Simpsons to Rocko's Modern Life. Segments from the series were later recycled in the Hoppity Hooper show.

Now a word from our sponsor:

There have been numerous feature film adaptations of the series' various segments, such as the 2000 film The Adventures of Rocky and Bullwinkle, which blended live-action and computer animation; and the 1999 live-action film Dudley Do-Right. Both films received poor reviews and were financially unsuccessful. By contrast, an animated feature film adaptation of the "Peabody's Improbable History" segment, Mr. Peabody and Sherman, was released to positive reviews in 2014. A rebooted animated series also based on "Peabody's Improbable History", The Mr. Peabody and Sherman Show, debuted on Netflix in October 2015.

Another reboot animated series based on the main segment, The Adventures of Rocky and Bullwinkle premiered on Amazon Video on May 11, 2018.

In 2013, Rocky and His Friends and The Bullwinkle Show were ranked the sixth Greatest TV Cartoon of All Time by TV Guide. - Wiki 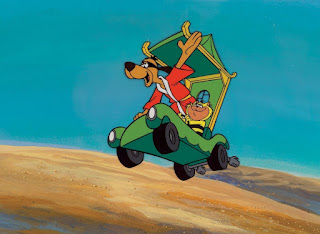 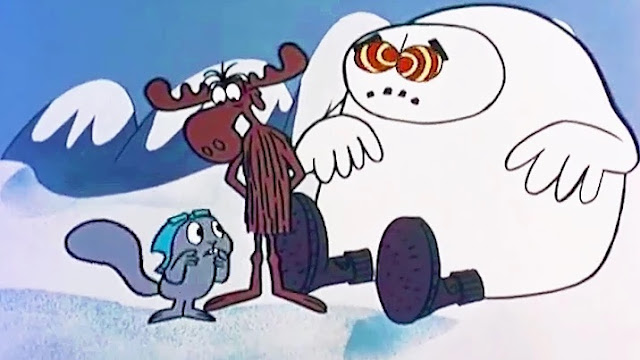 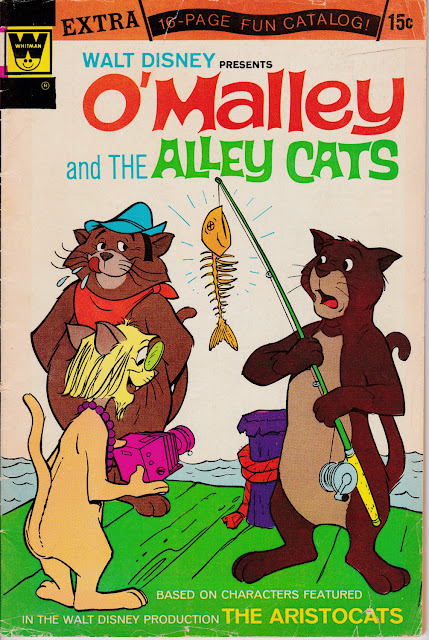 Former butler Edgar becomes a cat catcher. Our Fair Alley, art by Al Hubbard; The Alley Cats take part in the "Pretty City" contest to win a trip to Hawaii. The Tricky Trail, art by Al Hubbard; O'Malley is invited to a fancy feline pedigree party. Based on the characters featured in Walt Disney's The Aristocats 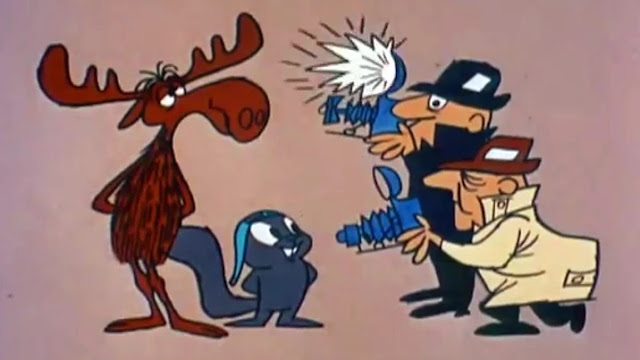