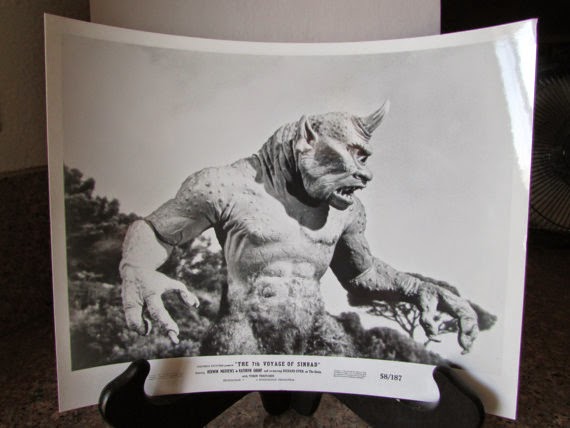 This is an original studio lobby card 8 x 10 image not a digital copy.

The item was produced sometime between the 1960s and 1980s to promote the movie in newspapers, books, magazines an in a movie theater.

The 7th Voyage of Sinbad is a 1958 fantasy film released by Columbia Pictures, directed by Nathan H. Juran and produced by Charles H. Schneer. It was the first of three Sinbad films made by Columbia which were conceptualized and animated by Ray Harryhausen and which used a special stop-motion technique called Dynamation (the others being The Golden Voyage of Sinbad and Sinbad and the Eye of the Tiger).

In 2008, The 7th Voyage of Sinbad was selected for preservation in the United States National Film Registry by the Library of Congress as being "culturally, historically, or aesthetically significant".