The Slapstick Comedy Maiko Haaaan!! Comes To US DVD 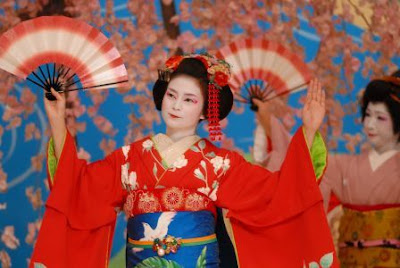 VIZ Pictures, an affiliate of VIZ Media, has announced the DVD release on June 24 of MAIKO HAAAAN!!!, a zany romantic slapstick comedy, directed by Nobuo Mizuta, about a nerdy Japanese office worker and his obsession with the little-seen Maiko (apprentice Geisha) world. MAIKO HAAAAN!!! features English subtitles, and will be distributed by VIZ Media with an anticipated retail price of $24.98. A dedicated web site is also available at www.maikothemovie.com.

VIZ Pictures has also announced a special giveaway promotion to coincide with the DVD release. Fans are encouraged to go to www.maikothemovie.com and enter the contest before June 24. Ten random winners will be selected to receive a special MAIKO HAAAAN!!! movie package that includes the DVD, poster, Japanese style geisha fan and a wallet keychain.

From acclaimed screenwriter Kankuro Kudo of PING PONG, Yaji and Kita: The Midnight Pilgrims and Takashi Miike's Zebraman, MAIKO HAAAAN!!! is a slapstick comedy with an energetic twist of manic Japanese humor that centers on a geeky salary man named Kimihiko Onizuka (Sadawo Abe, from KAMIKAZE GIRLS) who dumps his girlfriend because he believes he can only fall in love with an apprentice Geisha, otherwise known as a 'Maiko.’ He decides to pursue his dream of courting a real Maiko in Kyoto. The lavish and private Maiko Houses become a social barrier partly caused by a rival who is actually also a millionaire baseball player (Shinichi Tsutsumi). But Kimihiko remains undaunted and embarks on a wild journey using some outlandish premises to gain entry to the Geisha inner sanctum. Meanwhile, Kimihiko’s girlfriend (Kou Shibasaki) tries to win him back by leaving Tokyo to become a Maiko herself.

“Kankuro Kudo is a multi-talented creative force in Japan, winning critical acclaim as a comedian, musician, screenwriter, radio DJ and actor in addition to his talents as a film director,” says Manami Iiboshi, Director, Marketing, VIZ Pictures “His delightful new comedy, MAIKO HAAAAN!!!, puts a funny slant on the austere and seldom-seen world of geishas and audiences will delight in the outrageous events that transpire as one man takes his geisha fetish to a hilarious extreme. Domestic interest in Japanese cinema continues to grow, partly as a complement to the success of manga and anime, but it’s also gaining popularity with decidedly mainstream audiences drawn to the unique stories and characters these films present. As this interest grows, we invite everyone to enter a special MAIKO HAAAAN!!! giveaway and receive the VIZ Pictures newsletter which will give timely updates on new and upcoming releases and the latest in Japanese cinema!”
By Ken Hulsey at June 20, 2008