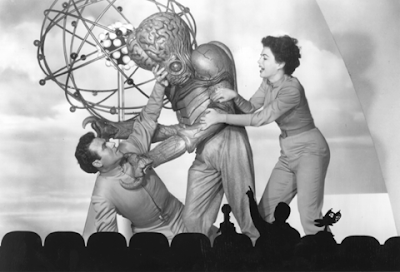 Multiple Emmy®-nominated and Peabody Award-winning Mystery Science Theater 3000 (MST3K) is a true cult classic. Its high-camp rendition of B-movies from every genre to the small screen makes it one of the most memorable pop culture shows of our time. Brimming with laugh-out-loud commentaries from caustically hilarious space travelers Joel Robinson, Mike Nelson and their robot pals Crow T. Robot and Tom Servo, MST3K was a genuine phenomenon. Its popularity spawned an MST3K fan following that numbers over hundreds of thousands of fans world-wide.

Earlier this year, Shout! Factory secured the worldwide home entertainment rights to a vast library of original MST3K episodes that have never-been-available on DVD or for digital download. The MYSTERY SCIENCE THEATER 3000: 20th Anniversary Edition DVD box set is the first of a series of DVD box set from Shout! Factory, in association with Best Brains, Inc.

In the 1960 sci-fi thriller First Spaceship On Venus, a mysterious magnetic spool found during a construction project is discovered to have originated from Venus. A rocket expedition to the mysterious cloudy planet is launched to discover the origin of the spool and the alien race that created it.

In 1978’s Laserblast, young actor Kim Milford plays an ostracized teenager who stumbles upon the remains of murdered mutated alien in the California desert. Along with the alien’s remains, a high-tech laser gun and power source are accidentally left behind by the extraterrestrial murderers. While examining the equipment, the teen inadvertently mutates himself with a laserblast, and embarks upon a murderous rampage.

1996 horror flick Werewolf begins with an archeological dig in an Arizona quarry. The Native Americans at the dig site recognize an unearthed skeleton as the remains of a werewolf, yet the team of archeologists are skeptical. When a dig assistant becomes infected and transforms into a werewolf, the ambitious team leader begins a horrific experiment, infecting the oblivious townspeople with the werewolf virus.

In 1997’s action-packed Future War, a race of evil cyborgs kidnap humans from Earth’s future to use as slaves, and take dinosaurs from the past to use as trackers. A determined slave, the “Runaway”, escapes and makes his way to present-day Los Angeles. There he must fend off the cyborgs and their trackers, the police, and the government, befriended by a prostitute-turned-nun who runs a halfway house.

The Mystery Science Theater 3000 series was created by Joel Hodgson and produced by Best Brains, Inc. After a year on KTMA TV in Minneapolis, its national broadcast life began in 1989 on the Comedy Channel (later to become Comedy Central), where it ran for seven seasons. The show’s final three seasons aired on the Sci-Fi Channel. The premise of the series features a hapless man who is trapped by mad scientists on a satellite in space and forced to watch old B-movies of questionable worth. To keep sane, he’s built two robot sidekicks, and together they do a running commentary on the films, affectionately mocking their flaws with inspired wisecracks and acting as a demented movie theater peanut gallery. Series creator Hodgson originally played the stranded man, Joel Robinson. When he left in 1993, series head writer Mike Nelson replaced him as the new B-movie victim Mike Nelson, and continued in the role for the rest of the show’s run. The format proved to be popular. During its eleven years and 198 episodes (including one feature film), MST3K attained a loyal fan base and critical acclaim. The series won a Peabody Award in 1993, and was nominated for writing Emmys® in 1994 and 1995.
By Ken Hulsey at July 29, 2008