The X-Files: I Want To Believe - Coming Home 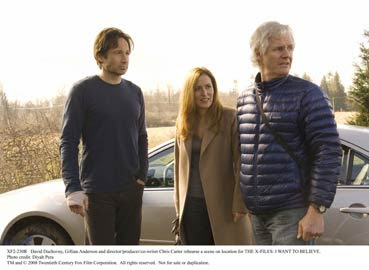 During pre-production, the filmmakers made the decision to shoot THE X FILES: I WANT TO BELIEVE where it all began - Vancouver, British Columbia, Canada, which served as the series' home base for its first five years. "Vancouver is where we first succeeded," states Carter. "I think that if there are ten things to credit with the success of The X-Files, then Vancouver ranks near the top of that list."

"From the beginning," confirms Spotnitz, "we liked the idea of coming back home to Vancouver. It was a heartbreaker for us, leaving Vancouver after season five. There were a lot of tears shed. And so, revisiting The X-Files gave us a chance to also revisit familiar faces and friends that we had left behind. As Chris and I wrote the movie, we imagined we'd be shooting it in Vancouver and taking advantage of the locations that are in and around the city. The locations were everything we hoped they would be."

Principal photography began last December in Vancouver. Cameras rolled for three months throughout the city and some of its surrounding municipalities. Cast and crew also traveled about 100 miles north, past the famed Whistler Ski Resort (home of the 2010 Winter Olympics) to shoot for three weeks in and around the snow-shrouded community of Pemberton, where temperatures often dropped below 0 degrees Celsius. (One evening, Gillian Anderson was so cold she had trouble moving her lips to deliver her lines.)

In Pemberton, Carter and his team staged some of the movie's most dramatic exterior scenes and stunt sequences. Here, too, secrecy was the order of the day...and of the night. "One of the hardest nights of shooting, we were filming in a place that was not exactly in the script and that was not exactly scripted," says Carter. "I swear to you, no one - including David [Duchovny] - knew what I was doing. I was just leading people. 'We're going to shoot here and we're going to do this,' was all I'd say."

Returning to Vancouver was only one of several ways The X-Files had come full circle. "I think the reason The X-Files series was so successful was that Chris imagined a beautiful universe, perfectly devised," says Spotnitz. "He created two very powerful characters, perfectly cast, with opposing views of the world - one a believer, the other a skeptic. Mulder and Scully dealt with the limits of what we understand about life and about the universe. It really is an incredibly rich and diverse universe - and an endless source of storytelling I think the voice of this movie is still very clearly the voice that Chris defined in the series' pilot, sixteen years ago."

Clearly, a new film based on The X-Files was a long time coming. But Carter thinks the delay worked to the project's advantage - that the interval between films enhanced the long-standing interest in a new chapter in the franchise. "It certainly helped renew my appetite," he points out.

And there's little question that it has peaked the excitement, anticipation and fervor of the legions of "X-Philes" who have long wanted to believe in a new case for Mulder and Scully.

Created and executive produced by Chris Carter, The X-Files, which premiered on FOX on September 10, 1993, chronicled the lives and adventures of Fox Mulder and Dana Scully, two disparate FBI agents assigned to investigate unsolved cases within the Bureau - cases that often involved the paranormal, the supernatural, and the inexplicable.

The X-Files was as much of a phenomenon abroad as it was in the United States. The show's conspiratorial tone and blend of paranoia, horror and suspense made it the most popular television series in Canada, the highest-rated series on Britain's BBC2, and one of the biggest sensations ever in Japanese television.

The show's nine-season run came to an end in 2002. In 1998, Twentieth Century Fox released the first feature film based on the series. The film - produced and written by Carter and co-written by Spotnitz - became a worldwide success, taking in $187 million in theatrical box office.