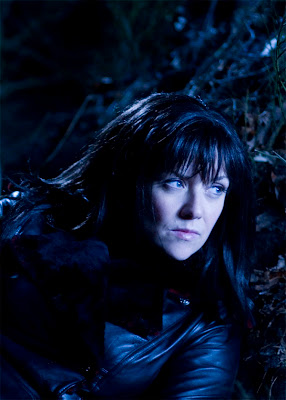 Here is the skinny:

"SCI FI will continue to trail blaze the television landscape by further exploring the many worlds of Sanctuary through its unique green screen environments," said Stern. "Technology and great storytelling makes Sanctuary a fantastic addition to SCI FI's 2009 lineup."

More than 3 million viewers tuned in to the premiere of Sanctuary on October 3, 2008 making it the highest rated original series premiere since Eureka debuted in July 2006.

Sanctuary follows the adventures of the beautiful, enigmatic and always surprising Dr. Helen Magnus (Amanda Tapping), a brilliant scientist who holds the secrets of a clandestine population — a group of strange and sometimes terrifying beings that hide among humans. Along with her new recruit, forensic psychiatrist Dr. Will Zimmerman (Robin Dunne), her quirky tech wiz Henry (Ryan Robbins) and her fearless daughter Ashley (Emilie Ullerup), Magnus seeks to protect this threatened phenomena as well as unlock the mysteries behind their existence. The series also stars Christopher Heyerdahl as the sinister John Druitt.

See Also: Amanda Tapping To Star In Sanctuary / 400 Fans Go Behind The Scenes Of Doctor Who And Torchwood / A Devastating Virus Wipes Out Most Of The World Population In Survivors / Fans Are Given A Rare Chance To Visit The Sets Of Doctor Who, Torchwood, And Sarah Jane / Torchwood: Children Of Earth Begins Filming / Torchwood Is Set To Experience The Big Bang / Torchwood Star Eve Myles Is A Knockout For BBC Radio / Torchwood - Are You Missing The Best Series On TV?
By Ken Hulsey - November 14, 2008