'20th Century Boys 3: Redemption' Has Duel World Premiere in Japan And US 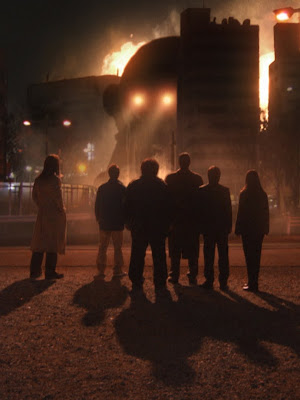 NEW PEOPLE, a dynamic entertainment destination bringing the latest examples of Japanese popular culture to North American shores, presents a very special world premiere the final chapter of the 20th Century Boys trilogy of live-action films – 20th Century Boys 3: Redemption – this Friday, August 28th at the newly opened VIZ Cinema located in the heart of San Francisco’s historic Japantown. The special world premiere will take place simultaneously with the theatrical release of the film in Japan and will continue to play at the venue through September 3rd. For schedule and ticket information, please visit www.vizcinema.com.

The 20th Century Boys film trilogy is based on a critically-acclaimed manga (graphic novel) series created by Naoki Urasawa that was a national phenomenon in Japan, selling over 24 million copies. Excitement and anticipation for the release of the final chapter has built steadily from fans because the ending of the film is markedly different from the original manga series that inspired it.

VIZ Cinema is the nation’s first movie theatre devoted exclusively to Japanese film and anime. The 143-seat subterranean theatre is located in the basement of the NEW PEOPLE building and features plush seating, digital as well as 35mm projection, and a THX®-certified sound system. 20th Century Boys 1: Beginning of the End plays at VIZ Cinema until August 27th (matinee only), while 20th Century Boys 2: The Last Hope runs through August 28th.

Directed by Yukihiko Tsutsumi and presented in partnership with Nippon Television, the 20th Century Boys saga begins in 1969 when a young boy named Kenji and his friends write “The Book of Prophecy.” In the book, they write about a future where they fight against an evil organization trying to take over the world and bring about Doomsday. Years later in 1997, a mysterious cult being led by a man only known as “Friend” has emerged and gained strong influence over society. A series of catastrophic events begin to occur, mirroring the prophecies made up by the young Kenji.

Now in 2019, could the catastrophe written in The New Book of Prophecy be happening for real? What’s the true purpose of Friend’s evil plan? Who’s the real savior to that will stand up against him?

In the final film, the year is Friend Era Year 3 (2017 A.D.) and the World President, Friend, rules humanity. After a deadly virus ravages Tokyo, a wall is built around the city and inhabitants’ lives have been severely restricted. Friend tells everyone that on August 20th, aliens will destroy mankind and only those who believe in him will be saved. But a movement to stop Friend is in motion. Is protagonist Kenji really still alive? What is Friend’s plan for August 20th? Will the mystery behind the true identity of Friend be uncovered? All of the prophecies, schemes and plans will be finally revealed in the saga’s exciting concluding chapter.