Just about everyone who reads Monster Island News is a fan Japanese monster movies featuring "Godzilla", "Gamera" and their kin. Well today I want to talk about a film from the land of rising sun, that you have probably never heard of, and that you probably will never see, unless you convince it's creator otherwise. I will get to more about that last part in a moment.

The film that I am talking about is the 2007 creation of monster suite maker Daisuke Sato (Godzilla: Final Wars, Gamera The Brave, Ultraman Max and a many more) called "The Foghorn".

You may be sitting there wondering, "The Foghorn...where have I heard that before?" Well you may or may not know that a short story, by that title, written by Ray Bradbury for the Saturday Evening Post, was the inspiration for the 1953 film "The Beast from 20,000 Fathoms". A film, which in turn, was one of the inspirations, along with the fate of the Japanese fishing boat Lucky Dragon, that producer Tomoyuki Tanaka used in developing his own monster movie called "Godzilla" (Gojira).

So you can see how a Japanese film maker would be interested in making his own film based on Bradbury's story.

Sato explains, “I decided to film ‘The Fog Horn’ partly because of its connection with Gojira and The Beast from 20,000 Fathoms, but the main reason is that it has been my favourite of Ray Bradbury’s writings for a long time. Ray Bradbury’s fiction is very poetic. ‘The Fog Horn’ impressed many Japanese people, and of course me, too, because of the enchantment he brings to it, evoking the tragic agonising of the monster and giving it a profound poetic quality.”

Here is a synopsis of the Bradbury story:

Johnny has been working with McDunn at the old lighthouse for the past three months. The lighthouse is situated on a rock 2 miles out to sea, and Johnny is looking forward to “shore leave” the following day. That night, McDunn tells him about a huge sea creature that comes to the lighthouse every year to cry out at the fog horn [mistaking it for the cry of its own kind]… and tonight is that night! The two make their way to the top of the tower and watch as the monster ascends and begins its yearly ritual. Very fascinating indeed, but when McDunn turns off the fog horn the monster shows its true, primitive nature!

Though Sato and his crew at Replica Co. Ltd poured their hearts into making their little film, they never really planned on releasing it to the public.

“We made The Fog Horn as a demonstration of our technical skills,” Sato explains. “It has not been released, not even in Japan. There is actually a problem with the copyright of the original, and so that is why we haven’t yet released it to the public. But if there is enough demand for it and a lot of people want to see it, then we’ll definitely release it. If we do, it will be as a DVD or online.” He added that he would definitely add English subtitles for international viewers."

That's where you come in. If enough fans want to see "The Foghorn", then the film makers will release the film.

You can help make this happen by leaving a response to this post (HERE). The makers of "The Foghorn" will be visiting Monster Island News from time to time to find out if the fans really want to see their film. If there are enough responses, then they will pursue a release.

The future of this film is in your hands, so spread the word!

Here is the trailer, some productions pics, and screen shots from "The Foghorn": 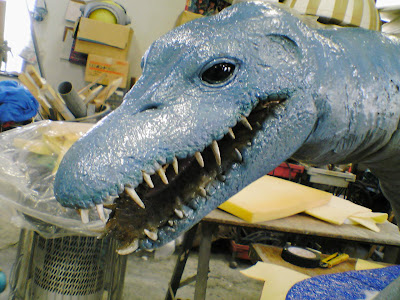 You Can Help Get "The Fog Horn" Released!

There's a new daikaiju movie from Japan that has not been released. The director needs your feedback on whether to release it in Japan and around the world (particularly in the U.S.). A fellow fan sent this to me and requested that it be posted.

The request is as follows (please forgive the all-caps as that is how I received it):

HI, IF YOU CAN HELP IN AY WAY EITHER BY POSTING THIS SCOOP UP ON YOUR SITES OR BY JUST LEAVING A COMMENT ON THE BLOG UNDER THE ARTICLE OR EVEN BY SHARING THIS NEWS WITH OTHERS THAT MAY BE INTERESTED IT WOULD BE SO GREATLY APPRECIATED!!!! IT'S TO SAVE A NEW [DAIKAIJU] GIANT MONSTER FILM I FOUND FROM JAPAN THAT HAS NEVER BEEN RELEASED NOT EVEN IN JAPAN!!!

THE DIRECTOR IS GIVING US FANS THIS ONE OPPORTUNITY TO VOICE IF WE WANT IT RELEASED OR NOT. IT'S A VERY SIGNIFICANT FILM TO BOTH AMERICAN GIANT MONSTER FANS AND JAPANESE DAIKAIJU FANS!!! I KNOW YOU GUYS ARE EXTREMELY BUSY BUT IF YOU COULD JUST TAKE THE TIME TO READ THIS ARTICLE AND MAKE A DECISION IT WOULD BE GREATLY APPRECIATED. NOTE: INTERESTED RADERS WILL NEED TO POST ON THE BLOG AS THAT IS WHERE THE DIRECTOR WILL BE FOLLOWING. ANYONE WHO LEAVES A COMMENT ON THE SITE DOES NOT NEED TO REGISTER OR CREATE ANY SORT OF ACCOUNT. IT REQUIRES AN E-MAIL AND ANY NAME AND NO SPAMM WILL IN TURN BE RECIEVED. ALSO PLEASE FEEL FREE TO REPOST THIS INFO AS WELL AS THE TRAILER OR PICS ANYWHERE TO HELP SPREAD THE WORD. THANKS FOR ANY SUPPORT YOU CAN GIVE!!!

Fans are encouraged to leave replies about the film here on Monster Island News as well. Everything posted will be forwarded to the makers of "The Foghorn" - Ken