StarCrash Coming To DVD And Blu-Ray From Shout! Factory 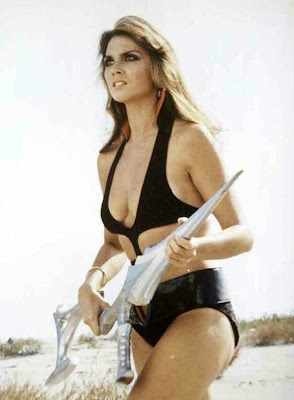 A couple of weeks back I broke the story that Shout! Factory was going to be releasing "StarCrash" on DVD and Blu-Ray as part of their "Roger Corman's Cult Classics" line.

From the press release below, it really looks as if the video distributor has gone all-out on this one, which shout make the fans of this cult-classic, and the ultra-sexy Caroline Monro, absolutely ecstatic.

2-DISC SPECIAL-EDITION BLU-RAY™ AND DVD
Digitally Remastered and Presented in Widescreen for the First Time with a Galaxy’s Worth of Special Features!

One of the most eagerly awaited inter-galactic science-fiction adventures, released by Roger Corman’s New World Pictures, will finally be made available for the first time to the home entertainment shelves as StarCrash, directed by Luigi Cozzi, will debut September 14, 2010 on 2-Disc Special Edition Blu-ray and DVD from Shout! Factory, in association with New Horizons Picture Corporation. An adventure like no other, the StarCrash 2-Disc Special Edition contains anamorphic widescreen presentation of the movie with DTS HD 5.1 surround sound (Blu-ray), a reversible cover featuring vintage art for original movie posters and a payload of bonus content including all-new interviews and commentaries with cast and crew, rare behind-the-scenes footage and much more! A must-have for loyal fans of Roger Corman and Luigi Cozzi, science fiction enthusiasts and collectors, StarCrash 2-Disc Special Edition Blu-ray and DVD mark the latest installments from the popular ROGER CORMAN’S CULT CLASSICS home entertainment series from Shout! Factory. Each Special Edition Blu-ray and DVD is sold separately. Blu-ray is priced to own at $26.97; and DVD is available at $19.93. 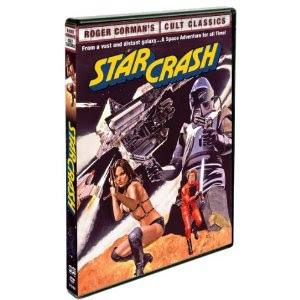 Produced in Italy in the wake of Star Wars’ phenomenal success, StarCrash (also known as The Adventures of Stella Star in overseas territories) became an international blockbuster in its own right. This 1979 film became one of New World Pictures’ biggest box-office hits. Critics might have laughed, by so did audiences, who grooved to its campy humor, wildly imaginative special effects (some of them quite good!) and non-stop adventure. Where Star Wars dared not go, StarCrash went -- at warp speed!

The lasting peace of the galaxy is threatened by the diabolical and relentless Count Zarth Arn (cult icon Joe Spinell, Rocky, The Godfather and The Godfather - Part II), who is determined to take the universe for himself and make each planet his plaything, each inhabitant his slave. There is no question that the Count is evil, given his propensity for cackling at every opportunity.

Can anyone save the universe from this megalomaniacal madman? Indeed there is, and she’s quite a beauty. 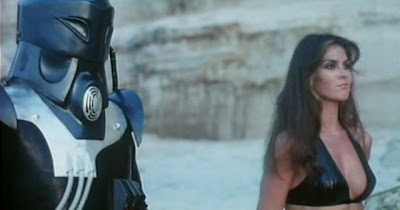 Brave, bikini-clad star warrior Stella Star (Caroline Munro, The Spy Who Loved Me, At the Earth’s Core) and her co-pilot Akton (child evangelist-turned-actor Marjoe Gortner, Food of the Gods, Mausoleum) are pressed into service to thwart the evil Zarth Arn’s plot. If they succeed, galactic peace will be achieved. If they fail, the universe will fall into decay and destruction at the hands of its sadistic new overlord.

Have no fear, because Stella Star is here!

StarCrash was written and directed by fan favorite Luigi Cozzi (AKA Lewis Coates), whose other cult masterworks include Alien Contamination (an “homage” to Alien) and the unforgettable Lou Ferrigno vehicle Hercules (an “homage” to Conan the Barbarian). The film also boasts a rousing score by five-time Academy Award® winner John Barry (Dances With Wolves, Out of Africa, 10 James Bond films).

Alas, StarCrash would prove to be the only big-screen Stella Star adventure ... but as its worldwide legion of fans will attest, it was one to remember! 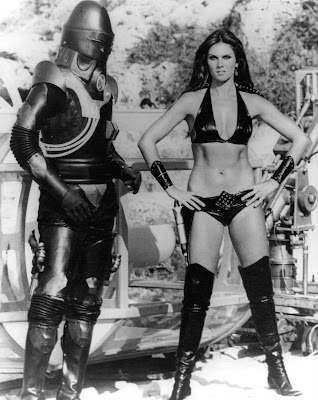 • Interview with writer/director Luigi Cozzi
• StarCrash: the music of John Barry, a detailed analysis of the score by
Mars of Deadhouse Music
• 2 feature-length commentaries by StarCrash historian Stephen Romano:

Commentary 1: the history of StarCrash, the making of the film and its importance in 1970s fantastic cinema.

Shout! Factory will continue to present ROGER CORMAN’S CULT CLASSICS home entertainment releases on a monthly basis. Upcoming highlights include The Slumber Party Massacre collection, The Evil, Twice Dead, The Warrior and The Sorceress, Barbarian Queen, Not of This Earth, Terror Within, Streets, Angel in Red, Lady in Red, Crazy Mama, Big Bad Mama, among others.

Independent filmmaker-producer Roger Corman’s storied career ranks as one of Hollywood’s most amazing success stories. Having produced more than 350 films and directed 50 others, his influence on American film goes far beyond his own energetic, creative low-budget movies. He is arguably one of Hollywood’s most gifted and masterful filmmakers. In 2009 he was the recipient of an honorary Academy Award for his contribution to the medium of film.

Shout! Factory is a diversified entertainment company devoted to producing, uncovering and revitalizing the very best of pop culture. Founders Richard Foos, Bob Emmer and Garson Foos have spent their careers sharing their music, television and film faves with discerning consumers the world over. Shout! Factory’s DVD offerings serve up classic, contemporary and cult TV series, riveting sports programs, live music, animation and documentaries in lavish packages crammed with extras. The company’s audio catalogue boasts GRAMMY®-nominated boxed sets, new releases from storied artists, lovingly assembled album reissues and indispensable “best of” compilations. These riches are the result of a creative acquisitions mandate that has established the company as a hotbed of cultural preservation and commercial reinvention. With its fingers on the pulse of pop culture, Shout! Factory continues to impact the entertainment media landscape through acquisition of top quality programming for home entertainment releases. Shout! Factory is based in Santa Monica, California. For more on Shout! Factory, visit http://www.shoutfactory.com/ 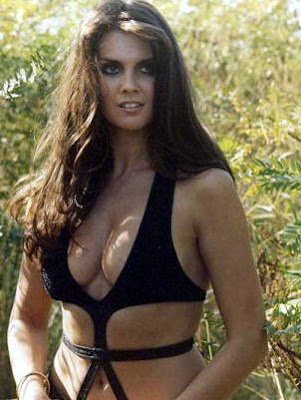