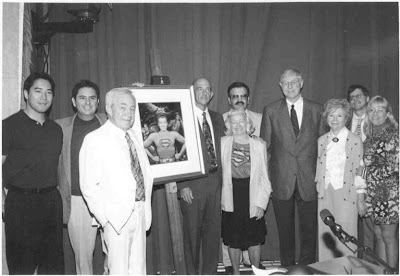 Above, a group photo from the Superman Week ceremony with Joanne Siegel and her daughter Laura at far right. Photo courtesy of the Los Angeles County Board of Supervisors.

Sad news today in the world of Superman.

Joanne Siegel, the widow of Superman co-creator Jerry Siegel and the model for Lois Lane (drawn by Joe Shuster) died today in California at the age of 93.

It was my honor and privilege to meet Mrs. Siegel in July 2001 at the Superman Week ceremony at the Los Angeles County Board of Supervisors. At that ceremony, Mrs. Siegel met actress Noel Neill for the first time. Neill played Lois Lane in to Sam Katzman Columbia serials and replaced Phyllis Coates in the role on the Adventures of Superman television show in 1953.

Mrs. Siegel later joined us for a luncheon at Cafe Pinot following the ceremony.

My condolences to the Siegel family.
By Armand Vaquer at February 14, 2011