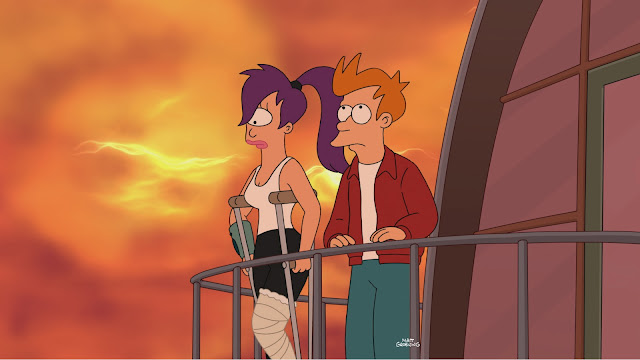 “Futurama” rockets into space for the (second) final time as the Emmy® Award-winning series will conclude its long history with this summer’s all-new season. The thirteen-episode summer run will premiere on COMEDY CENTRAL with back-to-back episodes on Wednesday, June 19 at 10:00 p.m. with the emotional series finale scheduled for September 4. Special guest stars for the final season include Larry Bird, Dan Castellaneta, Sarah Silverman, George Takei, Adam West and Burt Ward. The show’s entire original voice cast will be returning. Including the yet-to-air season, this will bring the total number of episodes in “Futurama’s” storied history to 140.

"I'm very proud of the upcoming season. If this is indeed the end of ‘Futurama,’ it's a fantastic finish to a good, long run," said creator and Executive Producer Matt Groening.

“Having the opportunity to bring ‘Futurama’ back for 52 episodes over these last four years has been a thrill for all of us at COMEDY CENTRAL. The upcoming season promises to be the best final season of ‘Futurama’ yet,” said Dave Bernath, EVP Program Strategy & Multi Programming.

COMEDY CENTRAL will celebrate the final season of “Futurama” with a host of bonus content on cc.com including weekly episode previews, highlights and photo galleries featuring concept artwork from the upcoming episodes. The site also contains clips from the entire library of “Futurama” episodes and features exclusive interviews with the show’s cast, as well as with Matt Groening and David X. Cohen, plus a “making of an episode” mini-documentary. Later this month, COMEDY CENTRAL will begin its summer-long celebration of the final season with the launch of “Countdown to Futurama” on Facebook, where its fan base has grown from one million “likes” prior to its 2010 resurrection on COMEDY CENTRAL to over 26 million “likes” today, making it one of the top television pages on Facebook. The “Countdown” celebration will feature new and exclusive content daily, including clips, episode stills, character designs and more. In addition, the celebration will extend to the COMEDY CENTRL Tumblr which will offer a “Futurama Fanarama” feature spotlighting fan tributes to the series and its final season.

First airing on FOX from 1999-2003, “Futurama” was brought back in 2007 with four direct-to-DVD movies that subsequently aired as 30-minute episodes on COMEDY CENTRAL. Based on their success, COMEDY CENTRAL ordered new seasons of the series which made a triumphant return to television in June 2010. Over the course of its storied run, “Futurama” has earned six Emmy® Awards--including two Outstanding Animated Program, seven Annie Awards, two Environmental Media Awards and two Writer’s Guild of America Awards.