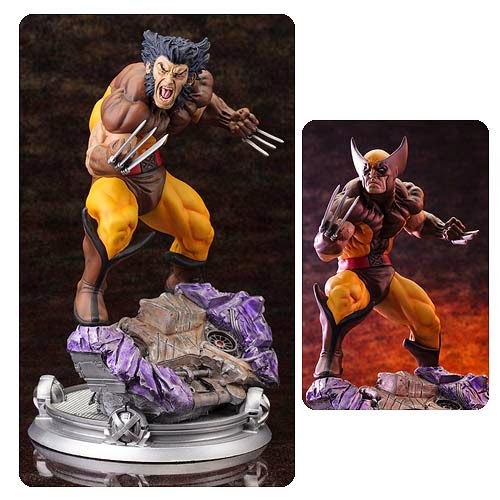 Barely focusing his mindless berserker rage, Wolverine crouches in a combat pose with his claws popped and ready for action. Swapping out his usual blue and yellow, Logan wears his classic brown and yellow costume with flared boots, red X-Men logo belt, and of course the iconic pointed cowl. Balancing on the balls of his feet as he prepares to leap at the next simulated enemy in the Danger Room, Wolverine's entire body is tensed with its rippling physique sculpted in high detail. Logan fans will really appreciate the display options with this version that include two portraits: the masked head is close-mouthed and focused while the bare head unleashes the ferocity with flowing hair and a wild scream! Sculpted by Danger Room veteran Erick Sosa, Wolverine Brown Costume stands nearly 8-inches tall (1:6 scale) as he crouches, and like the other members in the series he stands on a unique Danger Room holographic environment. Wolverine stands atop the smashed head of a defeated Sentinel, even more proof of his fighting prowess. Whether you're collecting the Danger Room Sessions statues or are a fan of Wolverine (especially in his brown costume), this Fine Art Statue is the definitive representation of the character!