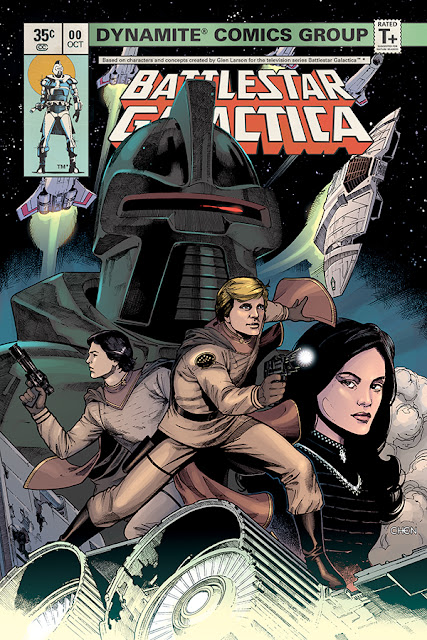 “Forty years ago this fall, tens of millions of people watched the original Battlestar Galactica pilot and TV series, which inspired interest in BSG comics, models, and toys that’s endured ever since. I was one of those kids in the audience every night — and it’s a delight to get to tell a story set in the original Galactica universe, set soon after the events of the first season," said author John Jackson Miller.

In Battlestar Galactica, Commander Adama and the remnants of humanity discover a second fugitive fleet, fleeing a different mortal enemy. Can the two armadas join forces, making common cause against the dreaded Cylons? And what would success mean for the quest for Earth?

“Battlestar Galactica often grappled with a single strategic tension: run, or turn and fight? That question inspired one of the series best-loved episodes, in which another surviving Battlestar was discovered,” added John Jackson Miller. “Our Counterstrike series goes a step farther, as the Galactica officers discover another fugitive fleet, much like theirs, running from a mortal enemy. Could making common cause solve both their problems?"

Dynamite Entertainment has been developing Battlestar Galactica comic books since 2006, focusing on each incarnation of the franchise from the classic continuity of the 1978 television series, to the Galactica 1980 follow-up, and finally to the reimagined series aired on Syfy from 2003 through 2009. Dynamite’s latest publication was a crossover between the two versions, in Battlestar Galactica vs. Battlestar Galactica.

“We’ve been admirers of John Jackson Miller’s writing for some time,” remarked Nick Barrucci, CEO and Publisher of Dynamite Entertainment. “His work on Star Wars was a leading factor in approaching him for this special BSGseries. With a .35 cent introductory issue, we’re hearkening back to the classic old Marvel days and giving readers every reason to pick up this series.”