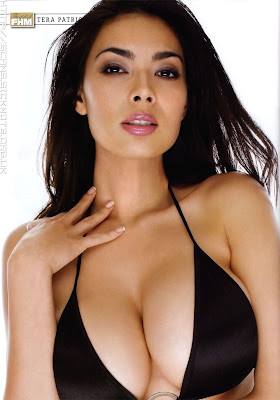 Director Quentin Tarantino is really jonesing hardcore to get big breasted adult film star, Tera Patrick, cast in his remake of the 1966 cult classic "Faster, Pussycat, Kill! Kill!". Sources close to Tarantino have been quoted as saying, "Quentin loves her, and she's a dead ringer for original star Tura Satana." Indeed Patrick doe resemble Santana, and a film about three busty women on a cross-country murder spree, would seem to be right up her alley. The only real question would be, "can she act?" It is obvious that her ample proportions are perfect for the part, but can she deliver lines? Time will tell.

It will appear that Tarantino won't have to try too hard to get Patrick excited about the part, apparently she has already learned of his interest. The chesty miss Patrick had this to say on the subject, "It would be the hottest remake ever, and I'm honoured to be considered. I was built for this part." Indeed that appears to be true.

Lets just say that if Tarantino wants her, and she wants the part, then this should be a slam dunk. All that seems to be standing in the way of this one is the paperwork.
By Ken Hulsey at June 30, 2008