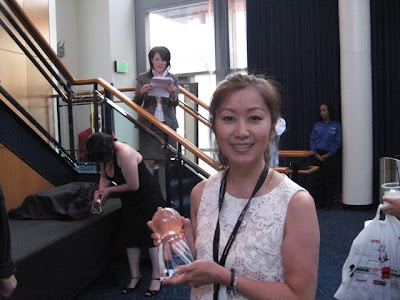 Bang Zoom! Entertainment has announced that Kaeko Sakamoto was named Best Casting Director by the Society for the Promotion of Japanese Animation (SPJA) for her work on The Melancholy of Haruhi Suzumiya. The SPJA is a non-profit organization that seeks to popularize and educate the American public about anime and manga. The SPJA Awards are announced each year at the annual Anime Expo convention, a massive 4-day event organized by the SJPA that is also the largest anime and manga convention in North America.

The Melancholy of Haruhi Suzumiya follows the high school life of Haruhi Suzumiya, an eccentric, young and bubbly high school girl with the unique power to control time and space. Joined by a group of her school friends, she forms a club called the SOS Brigade whose purpose is to find, befriend and have fun with an array of aliens, time travelers and espers.

“It was a pleasure and privilege to work on The Melancholy of Haruhi Suzumiya,” says Sakamoto. “There was a funny and kind of surreal moment during the initial casting process when I had to introduce the U.S. voice actress Wendee Lee to Aya Hirano, who played the lead role in the original Japanese version, and also to Patty Lee, who played Haruhi in the Bandai USA-produced ASOS Brigade videos. I was faced with three Haruhis and for a moment I felt like I was IN the anime itself; kind of in this other dimension where the time continuum was broken. It was a funny Haruhi moment!”

Sakamoto notes that one of the most satisfying parts of her job is finding the right voice actor for the role. “There is always a moment during the casting process when the character stops being merely animated and the voice actor brings that persona to life. The way an actor portrays certain emotions with confidence and believability lets me know they have an intrinsic understanding of a particular character’s personality and motivations.”

But she also explains some of the challenges, saying, “Many of these series have a ton of incidentals and bit parts and they take a lot of time to cast. You can't bring in individuals to play each and every bit so you have to make casting decisions in a way that is not only best for the role, no matter how small, but also makes sure that actors don't end up ‘talking to themselves’ on-screen. It’s not always easy to do and demands a solid understanding of both the original Japanese version as well as what’s required for the new North American dub.”

This is the first SPJA award for Bang Zoom! Entertainment and Sakamoto. “Recognition like this is very gratifying and shows how much the fans and industry support the job we did on The Melancholy of Haruhi Suzumiya,” she concludes.
By Ken Hulsey at August 26, 2008