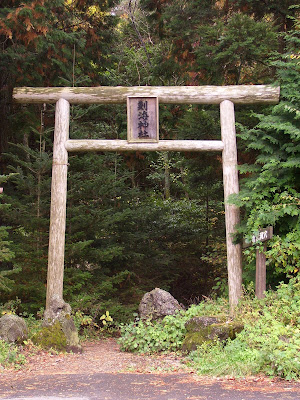 Written By: Ken Hulsey
If you were lucky enough to see the television show, "Destination Truth" a week ago then you probably know the story behind the Aokigahara Forest (Sea of Trees) and how it may very well be the most haunted place on Earth. If you are like me, you just can't get enough of shows like "Ghost Hunters", Monster Quest, and ...well... "Destination Truth." I, like you probably do, find myself thinking, "I could go to that place....piece of cake...no big deal." Give me any old graveyard, penitentiary, or mental hospital and I would be all over it. Now, when it comes to Aokigahara, well that's a different story all together. I got freaked out just watching it on TV. Honestly that place is creepy in ways I can't even explain. Well, let me try anyway.
To give a bit of information that may have missed if you didn't tune in to "Truth" when it aired. Aokigahara is famous for a place that many Japanese go to end their lives, and when I say end, I don't mean die of old age. I'm talking about suicide and hundreds of people a year go out into those woods and never return. The problem is so bad the the local Forestry Service has posted signs everywhere with slogans saying that "life is a precious gift" and "go seek help." Let me tell you, those kind of signs don't do much to brighten up the atmosphere in Aokigahara. According to sources on the net, these woods rank as the second highest place for suicide attempts in the world, and is only bested by San Francisco’s Golden Gate Bridge.

The forests of Aokigahara are littered with the remains of campsites abandoned by those who have found that life is no longer worth living. It seems that a common practice for those who wish to travel the after life, often spend several days camping in the woods in preparation for their final act. This has lead to the forest becoming a haven for scavengers, who are more than happy to retrieve the left over cash, credit cards, drivers licenses and other personal items that the departed have left behind. Again this doesn't add much to make Aokigahara any more cheery.

Of course the fact that just about everyone who enters the woods has some sort of paranormal event happen to them doesn't hurt the woods claim as one of the most haunted places on Earth either. It just goes to reason that with so much sadness and death present in Aokigahara that this would be a place where spirits either get trapped or their energy lives on for decades.

It is for these reasons that you would probably never find me walking around in the "Sea of Trees." Like I said before, you can send me to an old army hospital or crazy house and I would go. Heck, I might even think its fun. Aokigahara would be a real "gut-check", I mean you would have to have balls of stone to go there. I'm no coward, but that place would terrify me. You can count me out.....
By Ken Hulsey - October 10, 2008