UFOs Once Again Get Fighter Planes Scramblin Over Stephenville 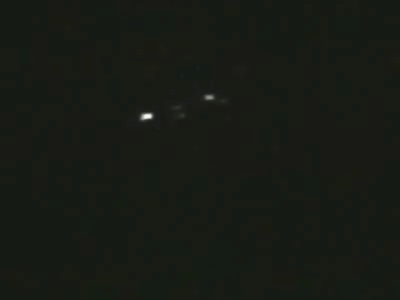 It looks like Stephenville, Texas is once again a hot spot for mass UFO sightings. On the nights of October 21st and 22nd a series of multi-colored lights buzzed the area from different directions.

On the following night, October 23rd, a group of students and parents were finishing up an event at Dublin High School when they spotted a large oval object with very bright lights.

One of the students, Andy Monrreal, used his parent's video camera to film the unidentified craft for about a minute. The footage appeared on News 8 (WFAA) in Dallas/Fort Worth accompanied by statements from the Monrreal family. Andy described the UFO this way, "You could see a shape. It was like a complete circle." Likewise his father stated, "I never seen nothing like that in my life… big lights and everything," and his mother added, "It was a round thing. You could see lights around it, flickering and changing. It was awesome. Just turning and flickering.”

In all, there were eleven witnesses to the ariel event over Stephenville that night, most of whom noted that soon after the mysterious aircraft appeared that military jets were also seen in the area. It is not known whether these jets were scrambled to intercept the UFO or they were on a training mission from a nearby Air Force base.

In January of this year it has been confirmed that fighter jets were indeed scrambled after several eyewitnesses spotted similar objects in the sky in the vicinity of the Bush Ranch in nearby Crawford, Texas.

See Also: Australian Musician Says Dot In Photo Is A UFO / A Turkish Security Guard Films UFO Multiple Times / UFO Spotted Over Slovenia - Another Photographed Over Dominican Republic / A Man In The UK Fears Alien Abduction After A Month Of Sightings / October 14th Is Here....And Surprise! No Aliens! / Aliens To Show They Are Real In The Skies Over Alabama
By Ken Hulsey at October 27, 2008