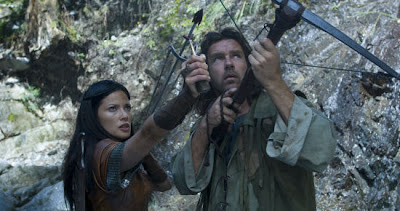 SCI FI will premiere the two-night movie event Knights of Bloodsteel (formerly titled Mirabilis) on Sunday, April 19 at 9pm ET with the second half of the four-hour fantasty adventure airing on Monday, April 20 at 9pm ET. David James Elliott (JAG), Natassia Malthe (Elektra) and three-time Emmy winner Christopher Lloyd (Taxi, Back to the Future) star in the movie event set against the backdrop of knights, sorcerers and dragons where heroes battle the forces of darkness.

Mirabilis is a world dependent upon the rare metal called "bloodsteel," a precious element that is the source of all magical power -- and now the bloodsteel is running out. The forces of evil, led by the ruthless and powerful Dragon Eye, are descending on Mirabilis to take control of the remaining bloodsteel. Acting on an ancient prophecy, the elf wizard Tesselink (Lloyd) recruits four ordinary people to save Mirabilis. A human vigilante John Serragoth (Elliott), an elf bounty hunter Perfidia (Malthe), a goblin with extrasensory powers Ber-lak (Dru Viergever), and a young conman Adric (Christopher Jacot) become the Knights of Bloodsteel. They undertake a quest for the mythical Crucible, reputed to be the source of all bloodsteel. Dragon Eye and his army are also looking for the Crucible, as whoever finds it first will have unlimited power.

See Also: Grove And Firestone Want To Rival Rings With Gathering Of Heroes
By Ken Hulsey at February 26, 2009