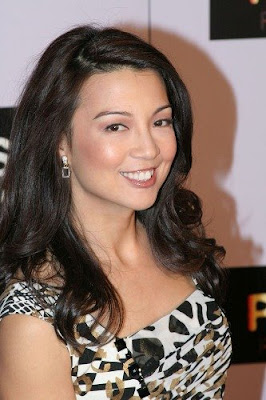 Ming-Na (ER, Vanished) is Camile Wray, a human resources executive with the international oversight committee that governs the Stargate program.

Edgier and younger in tone, SGU will take the franchise in a dynamic new direction, appealing to longtime Stargate fans and first-time viewers alike. The two-part premiere of Universe is being directed by Andy Mikita (Stargate Atlantis, Stargate SG-1) and lensed by Rohn Schmidt (The Shield, The Mist). The series is expected to premiere in October 2009.

SGU follows a band of soldiers, scientists and civilians, who must fend for themselves as they are forced through a Stargate when their hidden base comes under attack. The desperate survivors emerge aboard an ancient ship, which is locked on an unknown course and unable to return to Earth. Faced with meeting the most basic needs of food, water and air, the group must unlock the secrets of the ship's Stargate to survive. The danger, adventure and hope they find on board the Destiny will reveal the heroes and villains among them.

Robert Carlyle (Trainspotting, The Full Monty) stars as Dr. Nicholas Rush, one of the most brilliant scientific minds, whose motives are not what they appear to be.

Lou Diamond Phillips (Che, La Bamba) is Colonel Telford, a proud lifelong military man, who puts his faith in the chain of command. Stubbornly confident, he's highly regarded by his superiors. He is the chosen leader of the ill-fated expedition.

Justin Louis (Hidden Hills, The Fighting Fitzgeralds) portrays Colonel Everett Young, an experienced Stargate team leader. Married, with years of tough decisions under his belt, life has taught him never to take anything for granted. He stays on top of his team so they stay alive.

Brian J. Smith (The War Boys, Hate Crime) is Lt. Matthew Scott, a junior member of the Stargate team. Green and rough around the edges, he is thrust into the role of leader well before he's ready for the responsibility and must learn to command, earn respect through action, and manage the diverse personalities aboard the ship.

Elyse Levesque (Smallville, Men in Trees) stars as Chloe Armstrong, the daughter and aid of a U.S. Senator. Politically savvy, but with a wild side, she is considering following in her father's footsteps, until she finds herself trapped on the ship. As tensions rise, her character will be tested and her place among the group revealed.

David Blue (Ugly Betty, Moonlight) stars as Eli Wallace, a total slacker, who just happens to be an utter genius with anything he puts his mind to - mathematics, computers, video games. A lack of confidence has left him with an acerbic sense of humor.

Alaina Huffman (Smallville, Painkiller Jane) portrays MSGT. Tamara Johansen. Unable to afford medical school, the Air Force was the best option for the strong-willed field medic. Faced with the mounting pressure and a lack of in-depth experience, she will be forced to rise to the extraordinary occasion of needing to treat the seriously wounded.

Jamil Walker Smith (Waynehead, Sister, Sister) portrays MSGT. Ronald Greer, a Marine with a temper you don't want to mess with. His past is mysterious but it's clear something dark formed the hard shell around him.

Ming-Na (ER, Vanished) is Camile Wray, a human resources executive with the international oversight committee that governs the Stargate program. Now the highest ranking member of that division left stranded on the ship, she carries herself with a misguided sense of superiority over the other military and civilian survivors.

Brad Wright and Robert Cooper, of Stargate SG-1 and Stargate Atlantis, will serve as executive producers and writers on the new series.

Stargate Universe will debut as a two-hour movie event on SCI FI and will be distributed by MGM Worldwide Television Distribution.