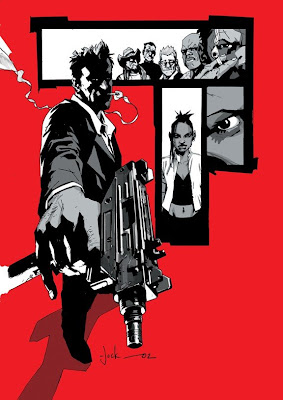 Principal photography is under way on Dark Castle Entertainment's action adventure "The Losers." The film is based on the comic book series published under DC Comics' Vertigo imprint, and is being directed by Sylvain White ("Stomp the Yard").

An explosive tale of double cross and revenge, "The Losers" centers upon the members of an elite U.S. Special Forces unit sent into the Bolivian jungle on a search and destroy mission. The team--Clay (Morgan), Jensen (Evans), Roque (Elba), Pooch (Short) and Cougar (Jaenada)--find themselves the target of a lethal betrayal instigated from inside by a powerful enemy known only as Max (Patric). Presumed dead, the group makes plans to even the score when they're joined by the mysterious Aisha (Saldana), a beautiful operative with her own agenda. Working together, they must remain deep undercover while tracking the heavily-guarded Max, a ruthless man bent on embroiling the world in a new high-tech global war.

Sylvain White directs "The Losers" from a screenplay by Peter Berg ("Friday Night Lights") and James Vanderbilt ("Zodiac"), based upon comic books written by Andy Diggle and illustrated by Jock. The film is being produced by Joel Silver ("Orphan," the "Matrix" trilogy) and Academy Award(R)-winning screenwriter Akiva Goldsman ("A Beautiful Mind," "I Am Legend").

"The Losers" will shoot entirely on location in Puerto Rico. The film is scheduled for an April 2010 release and will be distributed worldwide by Warner Bros. Pictures, a Warner Bros. Entertainment Company.
By Ken Hulsey at July 30, 2009