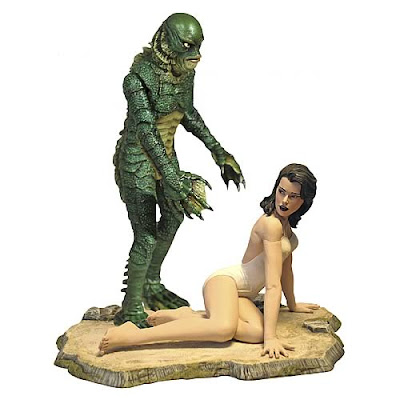 Figure of The Creature and his swim-suited human crush.

Give the last of the great Universal Monsters a home!

Sculpted by Rudy Garcia with a base by Jean St. Jean.

Universal Monsters Select debuts with the renowned last of the great Universal Monsters, The Creature from the Black Lagoon. Sculpted by Rudy Garcia with a base by Jean St. Jean, this 7-inch scale depiction of the infamous Gill-Man shows the legend in perhaps its most screen-accurate detail ever! Perfect for display, the Select version includes an exclusive paint scheme, as well as a detailed base featuring a full figure of the Creature's swim-suited human crush! 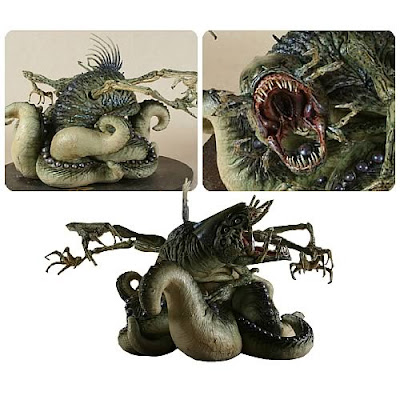 The latest addition to the Sota Nightmares product line, H. P. Lovecraft's Dagon is a 12-inch tall statue that features incredible detail in its horrific presentation of nasty things that crawl on the ocean's slimy bed… Dagon. Made of high-quality resin and special "flex-resin" in key parts, this limited edition collectible will be a prized add-on to any collection highlighting H. P. Lovecraft, monsters, or as Lovecraft stated, "gigantic, tenebrous, ultimate gods." 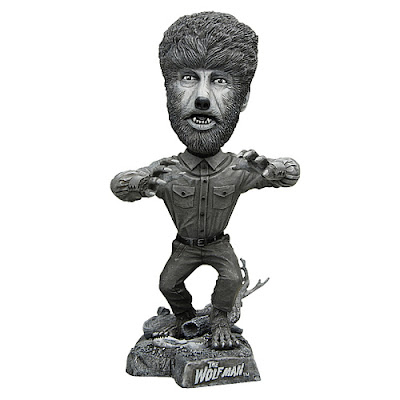 He just loves a full moon!

8-inches tall with a sculpted base.

Be sure to lock him up once a month!

He just loves a full moon! Perched ready to pounce on a sculpted base, and packaged in a 4-color window box, this 8-inch tall bobble head brings you The Wolfman… in black and white. He's a convincing rendering of the monster from the film, and he wants to come home to live with you. But you'll need to lock him up once a month! 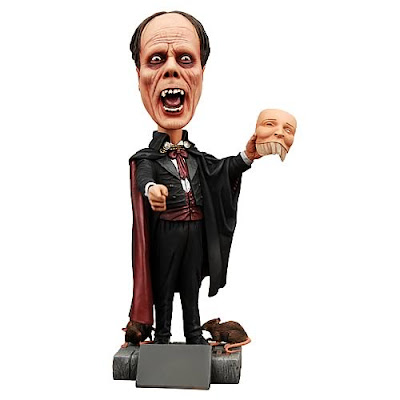 Haunting bobble head inspired by The Phantom of the Opera.

When childhood piano prodigies go mad and get scary looking, you end up with haunting bobble heads like this. Now the Phantom can move from the opera house into your house and collection! The precisely detailed resin wobbler stands approximately 6-inches tall and nods eerily at your slightest touch. Give this classic movie character the chance to hang around your home or office and spook your friends! 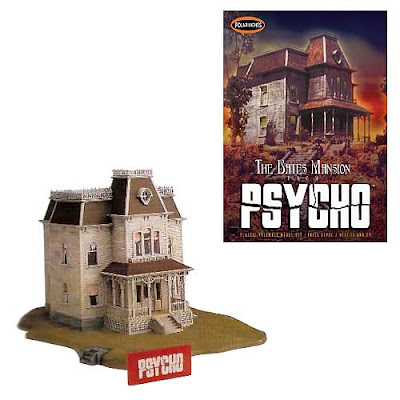 There's a Vacancy at the Bates' Motel! Perched atop a hill stands the memorable. Bates Mansion from Alfred Hitchcock's classic 1960 thriller, Psycho. Like Norman Bates' incessant attention to detail, this memorable structure features finely engraved surface detail, an option to build a hilltop version (hill not included), and a "mother" gure to place in the secondstory window. Kit is 8 1/2-inches tall when fully assembled. Light kit included to light the mansion's windows! 1:87 scale. 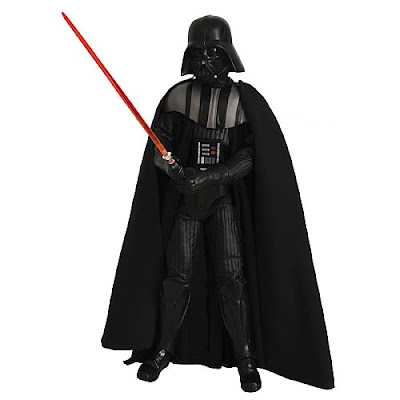 
Film-accurate helmet, lightsaber, and cloth outfit based on The Empire Strikes Back!

The Ultimate Quarter-Scale line of Star Wars collectibles continues with none other than the most powerful Sith Lord this side of the Emperor, Darth Vader! This latest addition to the series sets a new standard for cloth figures. Measuring over 19-inches tall, this massive figure features a film-accurate sculpted helmet and leather-like outfit, accented by a full-length layered cloak. With voice and sound effects from the Star Wars films, Vader also includes over 25 points of articulation and a movie-true lightsaber accessory. Showcase your figure with the included display stand, and prepare for the rest of this legendary line!

Please note: Item pictured is a prototype. The lightsaber will be different in the final release. 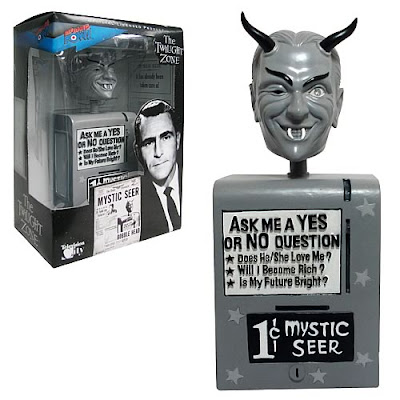 Look into the future… with the Mystic Seer!

From the The Twilight Zone episode "Nick of Time."

Wouldn't this look great on top of your TV set?

"The hand belongs to Mr. Don S. Carter, male member of a honeymoon team on route across the Ohio countryside to New York City. In one moment, they will be subjected to a gift most humans never receive in a lifetime. For one penny, they will be able to look into the future. The time is now, the place is a little diner in Ridgeview, Ohio, and what this young couple doesn't realize is that this town happens to lie on the outskirts of the Twilight Zone." Based on the classic The Twilight Zone episode "Nick of Time" that starred William Shatner, this terrific Mystic Seer Bobble Head measures about 6 1/2-inches tall x 3-inches wide x 2 1/4-inches deep, and it even includes fortune-telling cards as part of the packaging. Wouldn't this look great on top of your TV set?

Note: This item is a bobble head; it is not a full-size working replica of the Mystic Seer.

"You're traveling through another dimension, a dimension not only of sight and sound, but of mind. A journey into a wondrous land whose boundaries are that of imagination. That's the signpost up ahead. Your next stop… the Twilight Zone." (Spoken by Rod Serling at the beginning of each The Twilight Zone episode.)