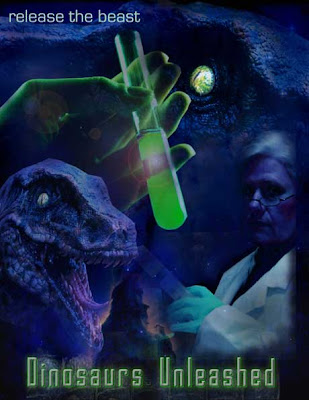 It looks as if the independent film company, Poison Apple Films, has beaten Spielberg, Marshall and Kennedy to the punch by producing their own prehistoric horror entitled, "Dinosaurs Unleashed."

Indeed, Steven Spielberg is presently developing "Terra Nova" for fox television and producers Frank Marshall and Kathleen Kennedy are gearing up to begin work on "Jurassic Parks 4 through 6", so dinosaur flicks and TV series are about to come back in a big way.

Luckily for Poison Apple, they have gotten the jump on these upcoming dinosaur related projects.

Phil Nichols, who also starred in the studio's "Vampire Diaries Renfield", who is pulling double-duty as the writer and director of "Dinosaurs Unleashed", describes the film this way, "It's a horror/sci-fi pic along the lines of Sssssss and the Carnosaur franchise and is about a mad scientist conducting DNA experiments in a small Texas town. We are using some of the recent soft tissue science discovered in dinosaur fossils to build our plot around.

Facades FX will be handling the gore, creatures, and dinosaurs; and casting is just beginning. We've shot some tests, and here are a few of those images."

Sounds a lot like what the late author Michael Crichton did in research for "Jurassic Park."

Trancetown College is a small institution facing financial hardships. This the collapse in the economy, funding is in danger of being cut for many programs on campus, and are hitting hard in every department. The Track Team, once the pride of Transtown College has not won a meet in three years, and school spirit is at an all time low. As a result, Coach Bloward's job is on the line, and he must win at all costs.

In the science program, cut backs are being felt there as well, much to the dismay of the eccentric Professor Hildegard Henbeak.

Together, Professor Henbeak and Coach Bloward forge a plan to save their jobs and serve her darker, secret purpose: to create an army of mutant dinosaurs and take over the world.

Dr. Steve Richards, with the help of his colleague, Dr. Leslie Harris, race against time to save the human race from Henbeak's demented plot.

It only seems fitting that Poison Apple chose Texas as a local for this one. The state has been the home of 'alleged' dinosaur sightings for decades. I fondly remember back in the mid-1970s when there were reports of a flying dinosaur attacking people in the 'Lone-Star State'. I also remember seeing a very old photograph that was reportedly taken around the turn of the century of a flying dinosaur nailed to the side of a barn. The winged reptile was reportedly shot by a Texas farmer.