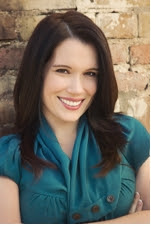 LOS ANGELES (May 21, 2012) – Anime Expo (AX), North America’s largest anime, manga, and Japanese pop culture celebration, today announced “Panty and Stocking with Garterbelt” voice actress Monica Rial as an Official Guest of Honor, when it returns to the Los Angeles Convention Center from June 29 – July 2, 2012.   Rial, who is the voice of Stocking, will participate in a meet-and-greet, autograph signing and a focus panel with Jamie Marchi, the voice of Panty.

Monica Rial has been working in the anime voice over industry for over 13 years. She has lent her voice to over 250 anime including “Baccano!” (Chane), “Black Butler” (Mei Ren), “Black Cat” (Kyoko), “Negima” (Konoka/Kazumi/Satsuki), “Soul Eater” (Tsubaki), “Witchblade” (Maria), and many more. She can be heard on the Cartoon Network in “ShinChan” (Ai), “Fullmetal Alchemist” (Lyra/Dante), “Fullmetal Alchemist Brotherhood” (May Chang), “Case Closed” (Amy), and “Trinity Blood” (Vanessa). You can also catch her on Nicktoons and the CW as Bulma in “Dragonball Z Kai.“  Rial is also an ADR script adaptor and occasionally a director for Funimation Entertainment.

About the Society for the Promotion of Japanese Animation

The Society for the Promotion of Japanese Animation (SPJA) is a non-profit organization whose mission is to popularize and educate the America public about anime and manga, as well as provide a forum to facilitate communication between professionals and fans. This organization is more popularly known by its entertainment property, Anime Expo®. For more information, please visit www.spja.org.
By Armand Vaquer at May 22, 2012