Hey, sheriff, you forgot your pants. 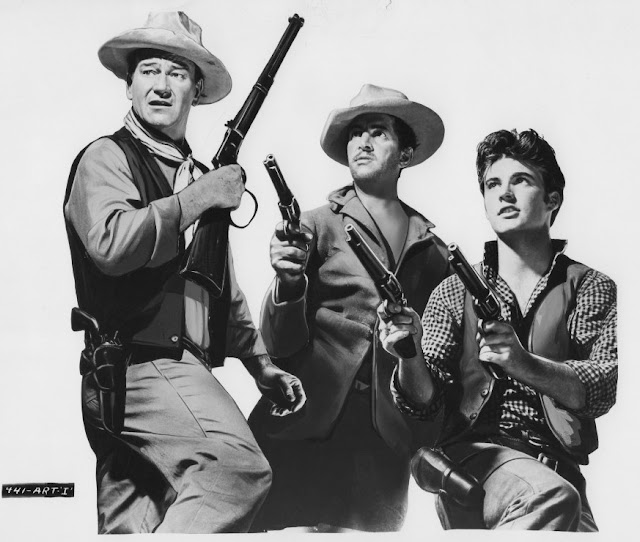 The movie 'Rio Bravo' (1959) had an interesting preview trailer. In the trailer, Ricky Nelson finishes playing his guitar, then he turns to the camera and talks about the exciting nature of the film. After some clips are shown, they cut back to Nelson who lists the cast members. When he does not mention his own name, we hear the voice of Dean Martin say off camera "What about Rick Nelson"?

On May 8th 1958, just one week into shooting Ricky Nelson celebrated his 18th birthday. As a gift, John Wayne and Dean Martin gave him a 300 lb. sack of steer manure, which they then threw Nelson into as a rite of passage.

Quentin Tarantino has said that before he enters into a relationship with a girl, he always shows her 'Rio Bravo' and if she doesn't like it, there is no relationship.

When Chance (John Wayne) wants to deputize Colorado he asks Stumpy (who is off camera) where he keeps the deputies' badges. While Chance is looking for the badges, Stumpy (Walter Brennan) still off camera tells him to look after his own props. Wayne started off in movie as a prop man and was known to get irate if the props were not where they were supposed to be. - IMDB