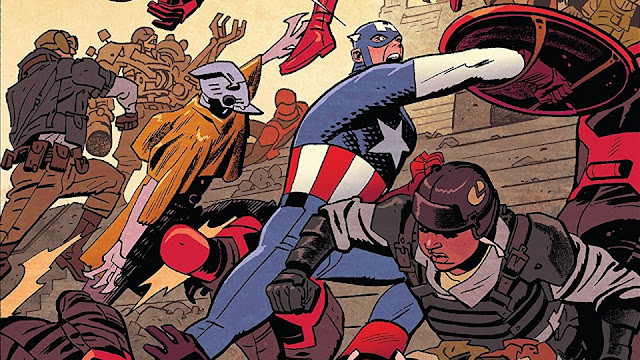 The main story in CAPTAIN AMERICA #700, by storytellers Mark Waid and Chris Samnee, colorist Matthew Wilson, and letterer Joe Caramagna, serves as a powerful culmination of this creative team’s run alongside the Sentinel of Liberty. But these all-star artists aren’t the only ones getting in on the landmark issue action! The Cap’s co-creator, Jack “King” Kirby himself, contributes to the action as well in a special bonus story written by Waid with colors by Wilson!

In the back of issue #700, Mark Waid took on the mammoth task of repurposing original Jack Kirby and Frank Giacoia art from TALES OF SUSPENSE with a brand-new Steve Rogers story. To get the all the details, we caught up with the writer to ask how he went about creating this cross-generational collaboration.

Marvel.com: How did you come up with the idea for this one-of-a-kind story?

Mark Waid: I’ve been wanting to do something like this for a long, long time. In the earliest days of the MARVEL ESSENTIALS black-and-white volumes, I came to realize just how many Silver Age and Bronze Age comics artists produced consistent and reliable work in an old-fashioned six-panel grid. To be honest, there weren’t that many who did huge, long, hundreds-of-pages uninterrupted runs in the 1960s and 1970s—John Buscema, Jack Kirby, Steve Ditko, Gene Colan, a few others. But I’d always wondered what it would be like to redialogue their material to create new stories—especially if I could pick-and-choose specific panels to build brand-new pages.

Marvel.com: Can you tell us what your process was like?

STEP ONE: I had to pick a character, but that was a gimme seeing as how this was going to be for CAPTAIN AMERICA #700.

STEP TWO: Before I even began choosing the artwork, I had to settle on one and only one penciller/inker team for visual consistency. This immediately winnowed down the number of available Captain America pages pretty substantially—inkers like Syd Shores and Dick Ayers were fine craftsmen, but their work was either too sparse (comparatively) or too centered on very specific scenes (say, World War II battle scenes) that would be difficult to weave into a modern narrative. In the end, based on the volume of collaboration as much as anything, I opted to pull from the Jack Kirby and Frank Giacoia stories from TALES OF SUSPENSE.