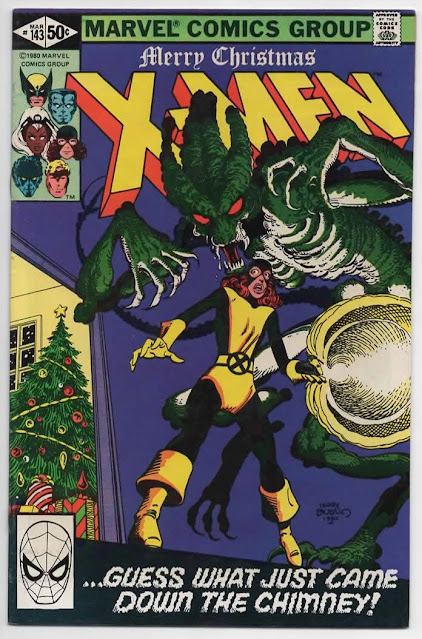 Flashback - The X-Men's first battle with the N'Garai, specifically Storm's destruction of the obelisk which was the nexus of the gateway between their world and ours. The X-Men believed that, with the obelisk gone, the gate was sealed, but a lone demon slowly crawled from amidst the rubble, free in our world.

In the present day a couple out looking for their first Christmas tree. Quickly their happiness became ashes - the N'Garai demon killed them swiftly and then feasted upon them, body and soul.

Meanwhile at the X-Mansion Kitty was learning how the Blackbird ran, backwards and forwards, when, to her relief, Angel interrupted to let Xavier know that it was time to be going. In the entrance-way, Logan introduced Mariko Yashida to Professor X. A mistletoe prank of Kurt's with Mariko drew Wolverine's ire, but things were soon set aright, although the mood was tense. Kitty lightened it by playing a similar trick on Colossus, who blushed deeply. Then most of the X-Men departed: Wolverine and Mariko, Angel off to see Candy Southern, and Professor X, Peter, Ororo, and Kurt off in the Rolls. Kitty Pryde was left in the mansion alone.

Kitty, feeling lonely, tried calling her parents with no luck. Scott called to wish everyone a merry Christmas. Finding only Kitty in the mansion, he promised to call tomorrow. He then found Lee Forrester to see about taking a job as a sailor. He is a little surprised to find that Lee is a woman when he was expecting the ship captain to be a man.

Still at loose ends, Kitty decided to work out, using a Danger Room exercise program. However, her work-out was interrupted by the intruder alarm activating in Ororo's room. Not wanting to disturb the police over what may be something as simple as a fallen branch, Kitty decided to investigate only to discover the N'Garai demon.

Kitty lead it on a merry chase through the mansion, phasing through walls with it fast on its heels. Losing it briefly at one point, she tried to make it to a phone to call the other X-Men. The demon was waiting for her, however, and while she phased in time, she still felt the claw as it scythed through her incorporeal form.

She escaped to the Danger Room, air-walking up to the control booth to use the room against her. The demon was taking its time to show, however, and she was starting to wonder just how smart it was when it entered the control booth instead of the room below. Kitty backpedaled into the Danger Room and it pursued her through the 'unbreakable' glass. The Danger Room came alive, and Kitty managed to barely keep just ahead of it and not get nailed by the room. Of course, the demon just tore through everything the room had to offer, but it delayed it long enough that Kitty got a good head-start, out of the Danger Room and to the rail-car to the hangar. Halfway to the hangar the demon ruptured the rail, forcing Kitty to travel the rest of the distance on foot.

Weary from exertion, Kitty got into the blackbird, its turbine engines pointed down the tunnel, the only realistic path for the demon to follow into the hangar. She started going through the ignition checklist. At the last second she ignited the engines, crisping the demon but wrecking the blackbird. She exited the plane, air-walking, confident nothing could have survived, when a burned claw arced towards her.

The X-Men returned home to a darkened house, having encountered police earlier warning them of gruesome murders that had occurred in the area. Wary, and with Professor X's telepathy somehow foiled, they entered cautiously. Kitty was curled up watching TV with a fire, and was overjoyed that the X-Men had returned. Kitty's parents were also with them.

It turned out that last swipe was the creature's dying attempt to kill Kitty. It made the supreme effort and it failed.
By Ken Hulsey at November 19, 2020