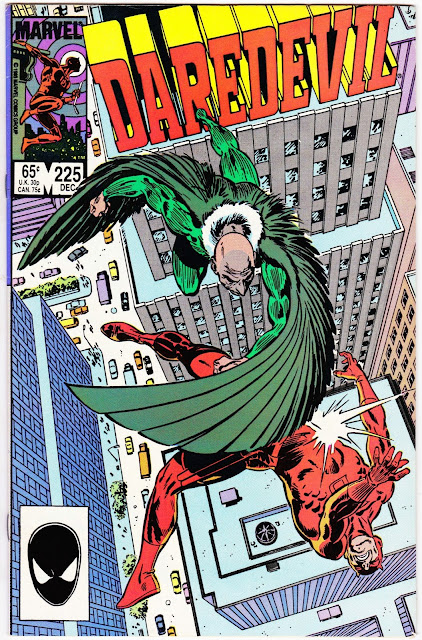 When Matt Murdock goes to visit Heather's grave, he discovers the Vulture trying to dig her up for her jewels. After he changes to Daredevil, the two battle, but the Vulture escapes.

Later, Matt visits his law practice, Nelson and Murdock. Foggy tells him that they are going out of business. They have lost their lease and all their paying customers. Foggy insults Matt and tells him that he depended on Murdock and that he has let him down, just like he let Heather down. Foggy says he is going for a walk, however, Matt notes that he did not take his jacket and that he took the elevator up to the rooftop.

It appears that Foggy is also contemplating suicide (as Heather did a few issue ago). The Vulture is in the shadows and appears to cryptically encourage Foggy. Daredevil appears and tries to dissuade Foggy. The Vulture and Daredevil fight again. Vulture taunts Daredevil and tells him that he senses death, and a wish to die, inside of the crime fighter. Matt insists that he wants to live and eventually lures the Vulture to a small room, turns out the lights and is able to knock the villain unconscious.