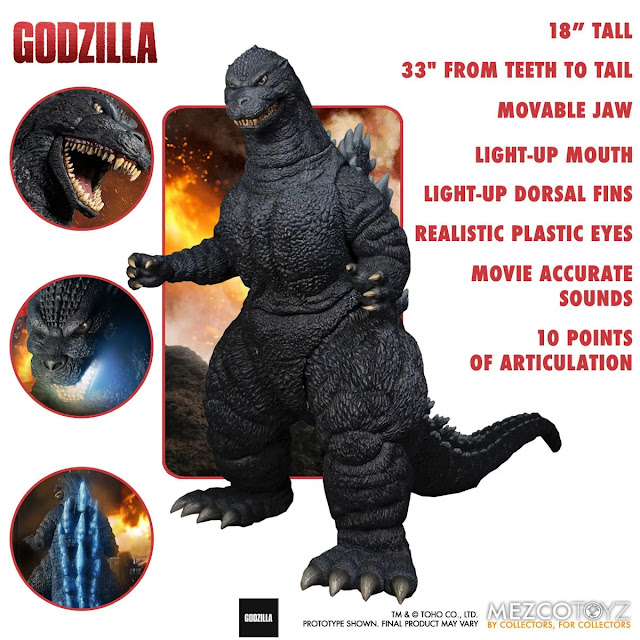 If you're looking for the ultimate Godzilla figure, this is it!
The King of the Monsters will tower and rule over your collection.
This gargantuan Godzilla measures 33-inches long x 18-inches tall!
Articulated, he features a realistic face and eyes, a movable jaw, and a poseable tail.
His mouth and dorsal fins light up, and he roars movie-accurate sounds!

If you're looking for the ultimate Godzilla figure, this is it! Measuring 33-inches long from teeth to tail x 18-inches tall, the King of the Monsters will tower and rule over your collection. As immense in detail as he is in size, the colossal kaiju features 10 points of articulation, a scary-real face with movable jaw and realistic eyes, light-up mouth and dorsal fins, a poseable tail, and movie-accurate sounds. Press the discreetly hidden buttons to light him up and/or hear his monstrous roar! The Ultimate Godzilla Light-Up and Sound 18-Inch Mega Scale Doll comes packaged in a collector-friendly box, fit for a king on display. If you buy only one Godzilla figure this year, make it this one!

After last issue's momentous tussle of giants, it's now painfully clear that Armageddon has descended on the human race. The government's bungled attempts the thwart the giant monsters have left an infrastructure in ruin and a nomad society desperately struggling to survive. And also... GIANT MONSTER FIGHTS! Destruction abounds in this issue of Godzilla: Kingdom of Monsters, featuring new artist Victor Dos Santos! 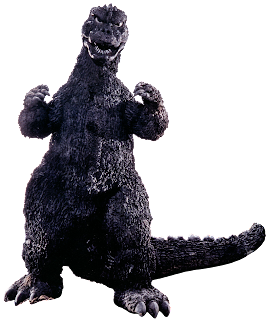 Godzilla (ゴジラ Gojira) is a daikaiju who first appeared in the 1954 Toho film, Godzilla.

The primary focus of his franchise, Godzilla is typically depicted as a giant prehistoric creature awakened or mutated by the advent of the nuclear age. For the early part of the Showa series of films, he was depicted as a villainous and destructive force of nature, punishing humankind for its use of nuclear weapons, which disturbed and burned him. Over the remainder of the series, Godzilla gradually developed into a heroic character, defending Japan by fending off other more malevolent creatures such as King Ghidorah, many of them extraterrestrial or controlled by extraterrestrials.
Even More Godzilla:

Godzilla vs The Gryphon: The American Godzilla Movie That Never Happened.

Images Without Context: King of the Monsters Edition