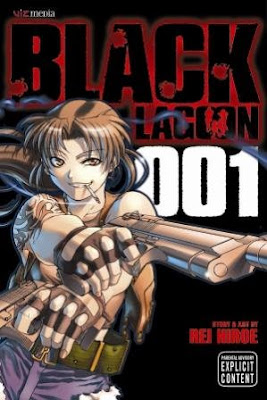 VIZ Media has announced the exciting North American debut of BLACK LAGOON, a manga (graphic novel) series by Rei Hiroe about a misfit group of mercenaries and their adventures on the high seas of Southeast Asia. BLACK LAGOON is available now from the VIZ Media imprint and is rated “M” for Mature audiences. It carries an MSRP of $12.99 U.S./$15.00 CAN.

Readers will lock ‘n’ load with Dutch the Boss, Benny the Mechanic, Revy Two Hand, and Rock as they seek adventure and fortune aboard their World War II-era torpedo boat, the Black Lagoon. In the treacherous underworld of the Russian Mafia, Chinese triads, Colombian drug cartels, crazed assassins, and ruthless mercenaries, it's hard to know who to trust. But if you've got a delivery to make, and you don't mind a little property damage along the way, you can count on the crew of the Black Lagoon! The action kicks off from the very first page as Rokuro Okajima, an average Japanese salaryman, is taken hostage by the crew during a mission to transport a computer disk with insider information that could bring down a major industrial conglomerate. But when Rokuro is sold out by his employer, he decides to join the Black Lagoon crew, who nickname him Rock and throw him headfirst into a deadly world of outlaw heroes, brutal villains, and blazing gunfights. Where he ends up is anyone's guess, but one thing is for certain – he's in for a wild ride!

Creator/artist Rei Hiroe debuted his first manga series in 1993. His most notable work, BLACK LAGOON, has been published in Shogakukan's monthly magazine Sunday GX since 2002. The series is critically acclaimed for its unrelenting, fast-paced action, gritty stories and highly detailed array of weaponry and military hardware. Based on the success of the manga in Japan, BLACK LAGOON was also developed into a blockbuster animated series that has produced two seasons in Japan to date.

“BLACK LAGOON is a fast-paced, gun-slinging action adventure in the tradition of Pulp Fiction and The Transporter,” says Mike Montesa, Editor, VIZ Media. “Readers will delight in the accurately depicted arsenal of weaponry and hard-boiled characters including the tough-as-nails Revy Two Hand, who is probably the sexiest femme fatale to ever pick up a Gepard anti-tank rife. With their modified PT boat, the Black Lagoon crew will deliver anything anywhere, no questions asked – so long as the price is right. We invite readers to delve into this shady and exciting world of double-dealing gangsters and ruthless criminals who will use any means necessary to try and stop this rag-tag group of well-armed mercenaries from fulfilling their dangerous missions.”
By Ken Hulsey at September 17, 2008